What is yo-yo vibe and how do I test for it?

Unless you feel your yo-yo has a serious problem in play, it’s unlikely you need to worry about vibe on any new, undamaged yoyo. Most modern yo-yos are exceptionally smooth because the quality of manufacturing is so high today, and vibe is nowhere near as common as it used to be 10 or 20 years ago!

What is yo-yo vibe?

… resulting in vibration when the yo-yo is spinning. 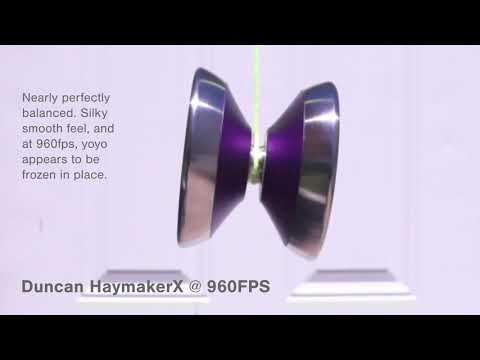 If each yo-yo half is aligned perfectly flat against each other, and the weight is evenly distributed in each half, no vibe should be present.

If there is significant vibe you will feel it (and hear it) on your fingernail. I personally like to hold my fingernail in the gap so it smooths out any “fake vibe” from my crappy throws, like so:

A bit of vibe isn’t the end of the world! There’s no reason to obsess over vibe too much unless it’s actively interfering with your play – a little vibe is plenty playable, and “perfect” isn’t necessary.

When should I be concerned about vibe?

It’s not usually possible to fix vibe since vibe depends how balanced and aligned the two halves of the yo-yo are. However, you might be able to improve it if the axle or bearing is a factor.

In order of difficulty and cost:

How bad this vibration is, depends how big of a difference there is between the two halves. If a yo-yo has perfectly identical halves, each half being exactly the same shape, size, and weight as the other half

I’m not so sure how necessary it is to have the halves the same weight. I have put together two different halves of yoyos I’ve made with huge size, weight and density differences and it spun quite smoothly.

You gave me an idea for an experiment so I created this … it is half yoyofficer vector, half horizon ultra … and all monstrosity!

Shockingly you are correct, I wouldn’t have believed it unless I tried it myself … but this was dead smooth on the string

So perhaps you are right that vibe is mostly alignment of the halves?

Shockingly you are correct, I wouldn’t have believed it unless I tried it myself … but this was dead smooth on the string

… I then tried half Vector, half Dread G (80g) and also… dead smooth on the string!

So perhaps you are right that vibe is mostly alignment of the halves?

I often read articles and watch youtube videos on how other woodturners make their yoyos and often try and tell them through the screen ‘it doesn’t matter!’ when they stress the importance of making the halves the same weight.

I think, at least in metal yoyos, the vibe usually comes from sloppy axle tolerances and the bearing. This is why the teflon tape fix often works; it can help absorb some of it.

There are also a lot of loose little parts in bearings that vibrate to varying degrees which can transmit into the body.

Bimetals are another level because there is an extra part. The more parts, the more easily vibe is introduced. I suppose the 9 Dragons is a good example of this (even though the shells are plastic).

Very thin walls combined with very high rim weight can also create a lot of vibe, so design definitely plays a part too even when a yoyo is machined perfectly.

I put together the most extreme half swap I could… half Dread G (80g version), half Smashing Crucible (50g). Massive difference in shape, diameter, and weight, see for yourself

Again… dead smooth on the string. It does list heavily to the side and it wants to turn because of the weight differential, but it’s perfectly vibe free. Seriously. I wouldn’t have believed it myself if I hadn’t tried it!

I’m starting to wonder if the halves matter less than the internal symmetry on each side, that is, distort the weight distribution of any side and that’s the origin of vibe. Because clearly mismatched sides isn’t causing vibe!

(Also agreed that this shows the alignment of the bearing and bearing seats and axle is extremely important.)

My son and I just conducted a vibe science experiment!

Before we begin, I’d rate this yoyo 9/10 on the fingernail smoothness test. I’ve felt smoother, but it’s certainly very smooth with no vibe at all.

We disassembled the yoyo and used the hammer to damage just one single rim, along the outside of the rim.

reassembled and thrown, no change to vibe, still 9/10 smoothness

reassembled and thrown, no change to vibe, still 9/10 smoothness

Given my previous testing combining radically different yo-yo halves and experiencing no vibe, adding these experiments leads me to this conclusion – no amount of rim damage or variance in the yo-yo halves alone can really affect vibe.

Since we know extreme rim damage alone doesn’t work … clearly the damage that matters must be around the axle and bearing. To get that kind of damage you have to throw the assembled yo-yo, I think. We tested by taking the same N12 – still 8.5/10 smooth – and throwing it as assembled, with string, into concrete.

My 9 year old son and I both tested this together, so we started with his throws and then mine (stronger, as I am an adult).

In short, the only way we could introduce intentional and meaningful vibe is to literally throw the yo-yo, assembled, as hard as we could at adult strength, into concrete. And to be honest even at 7/10 it was plenty playable! It was vibe you could detect with your fingernail quite easily but it didn’t impact play and was not visible on the string.

Of course, IN THE NAME OF SCIENCE, we kept throwing the yo-yo into concrete at heavy adult strength levels until it eventually came apart and we saw a visible bend in the axle. We put it back together and the yo-yo was still playable at that point though I’d rate it at 4/10 on vibe. And I suspect you could possibly fix it up a bit more by putting in a new axle.

It’s kind of shocking to me how resilient this yo-yo was, even when we were trying to break it, that wasn’t nearly as easy to do as I thought it would be. Turns out aluminum yo-yos are pretty tough!

As a result of these experiments I’ve updated the first post @Glenacius_K. It does seem that vibe is 90% the axle and bearing seat. I need to run an experiment to see what weight asymmetry on each half does, but I think metal simply isn’t capable of having as much weight density variance as wood or plastic due to unformity of the material.

* do sharks actually understand the concept of honor though

no amount of rim damage or variance in the yo-yo halves alone can really affect vibe.

I have to disagree. Damaging a yo-yo half while the yo-yo is disassembled isn’t consistent with how a yo-yo normally gets damaged. When your yo-yo is spinning a full speed and it smacks into concrete the entire yo-yo is effected. It looks like it’s just rim damage, but the force of the impact can cause a slight bend in the bearing seat, yo-yo halves, or axle that would cause vibe.

Isn’t that exactly what I said in the first post edit from 18 hours ago?

Damage is a big one. Slam your throw into the concrete enough and it may introduce vibe because the axle or bearing seat gets bent! Dings and damage on each half don’t matter much, except insofar as they are evidence that the axle and/or bearing seat are now damaged.

Oooh I misunderstood. I thought you were saying the damage experiment proved otherwise for some reason. Anyway, since this is a thread about vibe, here’s a helpful video:

what yoyo is on the first photo, right below the video

A little bit of vibe is no big deal, but as it progresses to a wobble it is an issue. A wobble can definitely be felt. Back in another time and place one could test for vibe or wobble by throwing a good sleeper in front of a CRT TV or monitor. The 60 Hz frequency of the CRT definitely showed any vibe no matter how slight. Unfortunately that trick dosn’t work with an LED monitor. I guess that dates me…

I really appreciate this thread because I thought vibe was determined when you first touch it meaning my Superstar(and only metal) had vibe. I was kind of bummed but not anymore.

I really appreciate this thread because I thought vibe was determined when you first touch it meaning my Superstar(and only metal) had vibe. I was kind of bummed but not anymore.

Now think about that for a sec. When you thought it had vibe you were bummed. But now you’re not. Maybe people get a little too hung up on vibe.

@codinghorror Can you elaborate on harmonic vibe? I got an iPPON last week and it seems to have this problem straight out of the box. Why is harmonic vibe something to be more worried about than constant vibration?

The one vibey yoyo I have that meets all three of these criteria is a topyo/unprld elimination I got off the reddit b/s/t, which is bimetal with an extra metal ring, so presumably has even more variables at work than your average monometal or bimetal…

It’s still playable, of course, but it’s kind of a bummer.

So my iPPON does this, but it’s only significant enough for me to feel when I’m not playing and just staring at it while it’s spinning.

The main question is - Does the vibe go away or smooth out when you touch the yo-yo with your fingernail?

Any imperfect throw will result in some vibe. Touching it to smooth it out is the best way to test if the yo-yo is vibey from your throw or from an actual issue with the yo-yo itself.

My throw vibe does go away when I touch it to my fingernail but then the harmonic/pulsating vibe remains.

However, I just tried reinstalling the axle and it seems to be almost completely gone now, so that’s nice!

I might try an axle reinstall with my Wedge.