What are some of your guys’ favorite organic throws? Plastic and metal!

There are a few other recent threads in this vein, if you’re interested. My favorite organics (O and butterfly shapes, by my definition) are my RSO End pt. II, OD Panorama, GWAY Saboteur, Recess Quiz, and TS Sistine Thief edition.

Here’s a quick shot of a few of my favorites, most of which are widely considered to be the GOAT organic throws (which is what interested me in some of them in the first place!)

Peak, Grail, MCMO, Creep, 5 Star, Panorama & Diorama
Noticeably absent from the pic is my Hatrick, it’s currently at my parents house but definitely would’ve been included in the pic if it was on me. 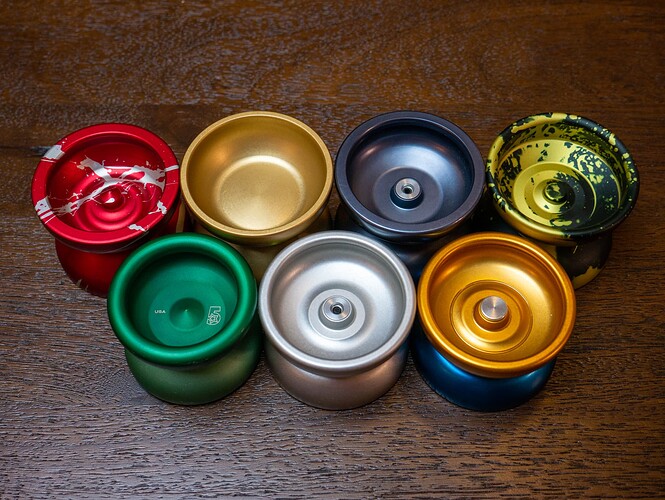 Like @Deadboots said, there have been a few recent topics about this, so here’s a write up on some of the most popular and revered organics and my thoughts about them, giving comparisons between each of them here:

If you could only have one organic in your collection. I need your help

Here’s my thoughts about the popular organics, I own all of these so I feel confident making a comparison:

MCMO - probably the best from a performance standpoint for an organic due to its stability. Doesn’t feel like an organic on the string and screams through combos with UL’s installed.

Grail - by far the floatiest feeling organic, has a hard to describe “goldilocks” magic to it. Unfortunately due to practically no rim weight, it is not as stable as the MCMO, although I have trouble choosing which one I like more (and go back and forth all the time).

Creep - I don’t reach for this as much as the MCMO or Grail, but I do feel it’s also one of the best designed organics ever. It perfectly calls back to that classic old/mid school feel without feeling like a brick on a string, like so many of those old/mid school yoyos do. I feel like it’s a better “Peak 2” than the actual Peak 2 is. @Tobiyo89 and I were talking on Discord the other day about how if they would’ve just released the Creep as the Peak 2 and put the Peak nub on it, the Peak 2 likely would’ve been better received.

Peak 2 - Don’t get me wrong, the Peak 2 is totally a great yoyo on it’s own, and I feel like if it wasn’t attached to the Peak legacy, and released under it’s own name/as its own thing, it would’ve been received better. It’s smaller than the MCMO, Grail, and Creep so I do pick it up less but I love it! However, if you throw an OG Peak, you’ll realize that the 1 and 2 are a bit more different than they are similar in terms of “feel.”

Hatrick/5 Star - My first ever high end yoyo was a Hatrick that I bought in 2009 at Nationals when it was first released, so I’m very sentimental about it! 5 Star is great as well, but keep in mind, these are pretty undersized by modern standards, and not performance pieces in the slightest. More for fun than anything. Basically, if you like small organic yoyos with a great blast, these are for you.

Panorama - My go to, the one I grab the most, my EDC, and my favorite organic without a doubt. Easily pocketable (doesn’t protrude like other yoyos do, due to width) but 100% capable of anything you throw at it. One of the greatest and most “fun” yoyos of all time IMO.

Ideally, these yoyos are “the essentials” when it comes to organics, that I think everyone should have in their collection or have at least tried (also an 888 and Anti Yo stuff). But, if you could only make me keep 3, I’m choosing Panorama, Grail and MCMO - those are the ultimate “must try/buy” organics.

I was recently throwing the @TSAF Sistine and wondered if anyone mentioned it in last year’s favorite organics topic. I couldn’t find it and was about to resurrect that thread when I realized that the Sistine was sold out so wouldn’t be that helpful. But, since it came up… yes, it’s ideal. Just right between the Grail and the Dale in size and as good as any organic I’ve tried.

That old thread is a good read if you’re interested:

What is your favorite organic yoyo? General Yo-Yo

I’ve always loved organic yoyos, and lately I’ve had an opportunity to pursue a few of them. I was just wondering what the favorites were. Grail and MarkMont Classic are the most obvious choices, but what are some that you think are undervalued or overlooked? Or maybe just not talked about enough?

Yes, it’s pretty killer. Did you get a Thief or an OG? I didn’t realize it when I got mine, but the Thief edition is 2.7 grams heavier according to the Throwing Sideways website. It’s also still in stock there.

Edit: they advertise it as “edc grade” or b-grade. Mine is very, very smooth with an anodization flaw that is difficult to detect.

I’ve only tried a couple of Organics.

For cheap and cheerful. The MagicYoyo N12 is organic…ish. And the T9 which is a pocket organic. Both are cheap and pretty good. I like the N12 better than the T9.

For a bit nicer I’ve tried the Gway Throws Saboteur and Daredevil (which isn’t a traditional organic. More like a cross between en H shape and an organic. And the Yoyo Friends Koi.

The Saboteur and the Koi are probably the most comfortable throws I’ve used. The Daredevil one of the funnest. It’s fast, snappy and has fairly good performance.

Playing with the Koi today. 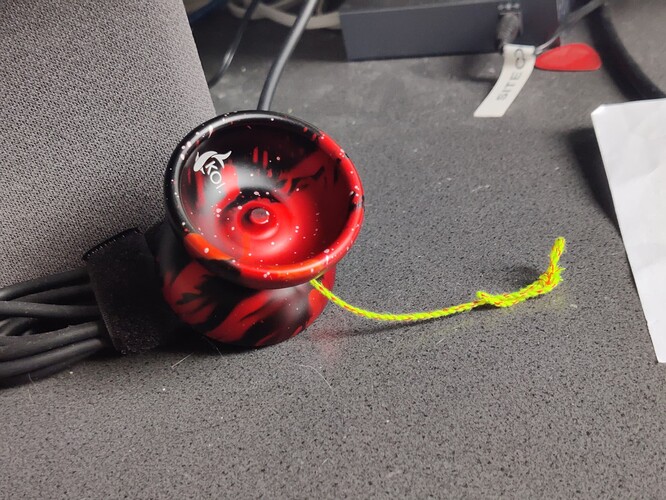 The OST Confluence is so underrated it’s criminal. Why is no one talking about this yoyo? It has the cleanest look out of any yoyo (yes, even the grail in my opinion) and it plays so well.

I have never heard of OST or the Confluence till now but it does look nice. Not my style with the polished rims but I’d love to give one a throw.

One slightly underrated organic yoyo I think is the Mowl Q. Still a few in stock at YYE. Not too light not too heavy. Super minimalist look to it. I’ve seen people call it the Japanese Grail but I’ve never played a Grail so can’t confirm this. 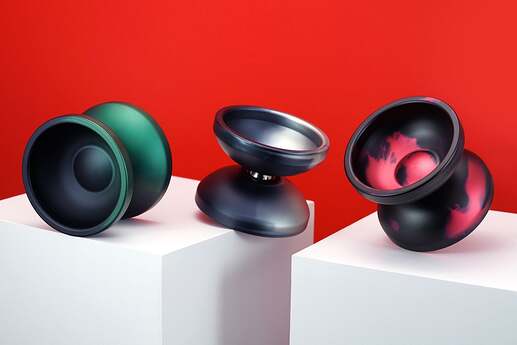 But for me no one is killing the organic game more than Atmos right now. Insanely high quality, amazing anodizing and crazy smooth blasting. Oh and they also mess around with Side Effects. 11/10 for all their releases 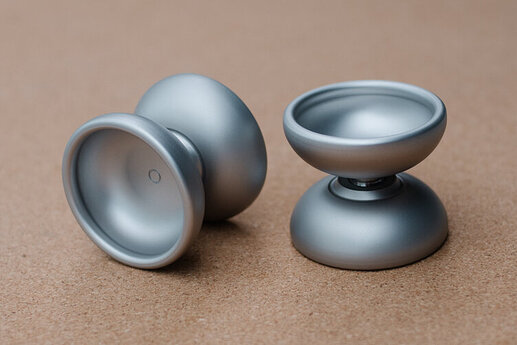 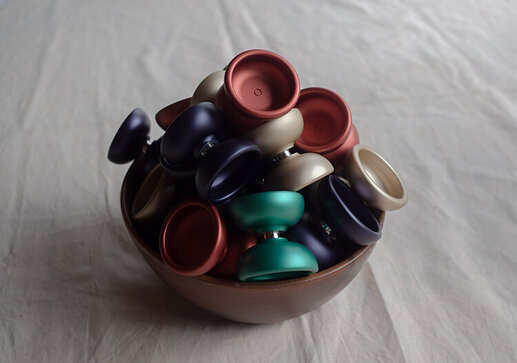 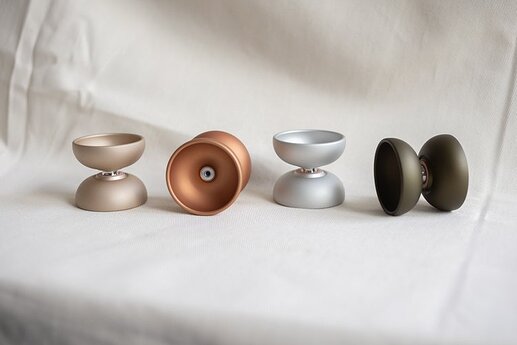 Let me once more be a broken record and chime in to say the Duncan Freehand One. It comes in both metal and plastic, and you get to choose exactly how floaty or solid you want it to play with caps options. It’s the swiss army knife of organics, only really rivaled by the Gravity which is more like an entire tool box.

I’m really enjoying my yyt arcade for an organic. It has a very nice feel in the hand and plays extremely well. I would definitely check one out if you can

Panorama, which is a lame answer but I’ll also say the ShowPony, i loved how light it plays, its really unique and high quality

Markmont classic (plays better than the MCMO, change my mind!)

Yomega Brain. I like how different it feels from the soulless competition yoyos of today.

Also, for a new organic that might be flying a bit under the radar, the PDX Locus is great! It’s also readily available… 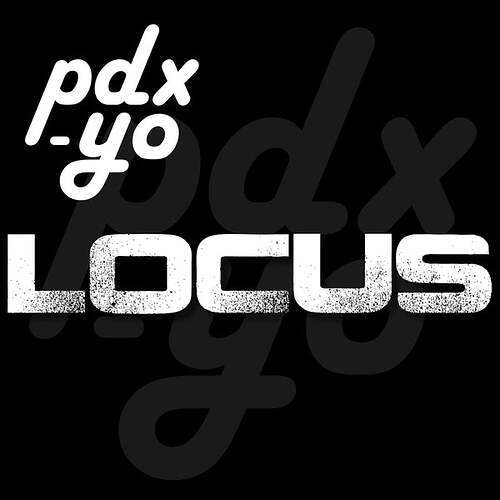 The latest release from PDX-YO is a beautiful new organic with a unique aesthetic - The Locus! The Locus is a slightly compact mono-metal design that fits comfortably in the hand and offers a nimble feel on the string. The rounded profile draws...

Project Y, Project Ti, pv44, and 138 all by Fair Trade yoyos are all great organics. I also love the FH1AL both large bearing and small bearing. The new FH1 plastic is wonderful as well.

Does the OD Rebirth count as organic? Because that yoyo is something very special.

No one has mentioned a plastic organic yet, but I think most will agree that the Recess First Base is one of the absolute best plastic organics out there.

Ooo I’ve been curious about that actually. I have an MCMO because it looked incredible but was a little let down when I got mine. Everyone says it’s so incredible but mine doesn’t seem to play very well. Would be super interested to try out a Markmont classic!

It must be Thief since it’s pretty new. Doesn’t feel heavy to me at all, but I’m only eight tricks into the Advanced Part 1 section of the YYE trick ladder so not super sensitive.

The Thief edition is the blue/gold halfswap with the small engraving on the rim. I think the first run was clear and black with halfswaps.