Do You Prefer Long or Short String?

See, as someone with a long torso and limbs (classic ectomorph), anything under a certain length feels very limiting. Triple or nothings become super tight with less room to move for me; add that extra inch or two and it’s amazing how much more floaty and free my play is.

Pre-tied drives me CRAZY! Give me a long piece of string let me decide lol. Magic does this with their string and it always feels like such a waste!

Now that I think about it, untying 100 knots that were in the wrong place would be the worst.

I’m just picky as heck, my dude! Give me long string no pre-set knots let me do it LOL

With all of that said, what brand strings come to mind from anyone when I mention long strings as-is out of box, no pre-loops etc.?

Open to any and all suggestions!

Some (all?) Markmont strings are available in 65”.

This might be an unpopular opinion now, but I think more people should play with significantly shorter strings. In the same way learning on a responsive yoyo builds better form/flow/habits, I feel like there’s so many benefits to short string. It seems like a lot of people now just instantly jump to long string.

I swapped over to longer strings to boost my consistency when I started learning more modern tech from my favorite Japanese players. But if I wasn’t doing tricks like that, I’d have no reason to use the string length I do. Simple elements can look good with long string, but it just requires a much higher level of control. Nothing wrong with preferring long string, but I think starting long is kind of a trap in the same way as starting on an unresponsive.

A good word of advice on string length is “only as much is required for your longest trick.”

@mable I tend to agree with this view. I play outside a lot and whether its dingable objects/concrete nearby or even people, I have so much more control with a shorter string. I in turn almost never ding my throws, can stay more relaxed around people, and its generally easier to flow.

Totally makes sense, peeps! I’m always the odd ball with everything I do; left handed, always like the less popular options by nature etc., lol.

One thing that blows my mind is people doing triple or nothing starters with shorter string. I need room for that!

One thing that blows my mind is people doing triple or nothing starters with shorter string. I need room for that!

Same. I could never seem to get triple or quadruple or nothing unless I have longer string.

Prefer Longer String. I can always make it shorter.

I cut a string three times and it was still to short. Once… A bunch of times.

I mostly play pretty fast, so shorter string for me. Mine are belly button length, which is about 105cm. Triple or nothing is fine for me, but I don’t think I can do quadruple or nothing.

i tend to prefer slightly undersized throws to make more room too. yoyos have gotten really wide… i like a few wider than 40 mm, but still i generally like about the size of fh1 or a pinch smaller.

I also LOVE dabbling in extra long play which I find is a lot more easier to come up with more interesting mounts/ideas.

Both sizes have its advantages and disadvantages for sure! 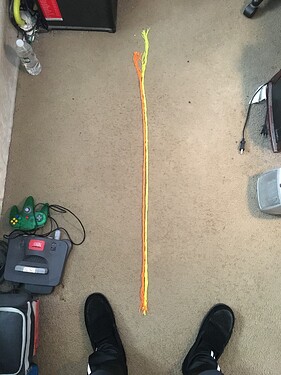 Turns out the new SOCHI string is very similar to the OG Kitty and is the same length, so that’s what I’ll be going with for bulk strings from here.