in the forums it has been asked already by some other people, usually with less success hence I try my luck this way:

End of May, I ordered two yoyos from them directly via their Facebook page. They’ve received $170 for those plus extra Stax plus shipping from me. Until this day, I have neither received the yoyos nor heard from them ever since. The last message was “cool beans. i’ll get that out to you in the morning.” Cool beans, indeed.

While initial contact via Facebook was swift, ever since I had send the money, I got no reaction again. I tried the email address that I paypal’ed the money to, but still no luck.

So how can I reach them? Will they be at Worlds?

Is it too late to file a PayPal claim?

File a PayPal claim if you can, although it might be too late.

Also, will everyone PLEASE STOP SENDING ALEX KIM YOUR MONEY! He has been ripping people off for YEARS now and for whatever reason everyone just keeps on giving him opportunity to do it again.

well, if people knew about not sending money to Alex Kim then they might stop. So far, I have not had any bad experience when contacting manufactures directly. Seeing RecRev’s products in some stores I thought this might be a legitimate manufacture as well. Looks like they are (or he is?) not. Which is sad. I wish somebody would have pointed this out to me earlier, how terrible RecRev really is before.

Does that mean no one has a way to contact Mr Alex Kim? Is he on YYE?

Last email address I had for him is donutsandwine@gmail.com.

I used to have to talk to Anthony Rojas to get anything done. Try him. 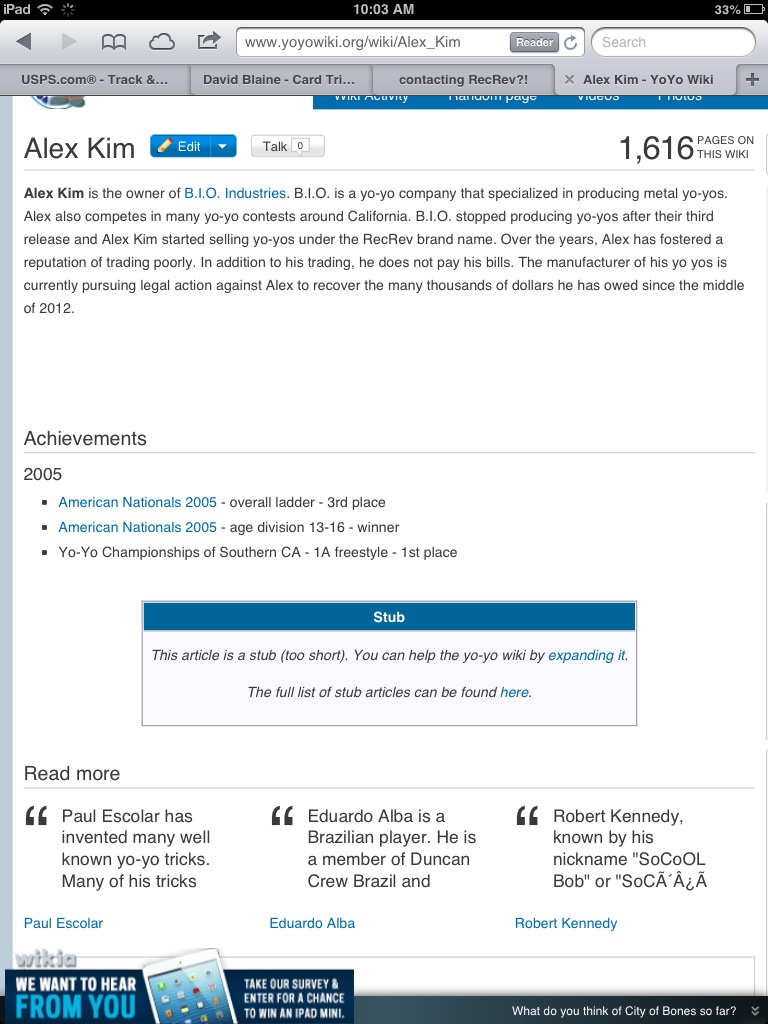 I know for a fact that Alex rarely checks the recrev page, so if you have been trying contact there, he probably hasn’t seen anything.
Most likely he forgot, and hasn’t been reminded because of not seeing page messages.
He’s honestly a chill guy who for those that know him have seen that he tries to make things right with everyone, he just tends to be forgetful about things.
His Facebook is your best bet and knowing how he does things as of late, he will greatly make do with the wait.

Can someone link me to his FB? Alex Kim seems to be a common name.

to quote Steve Brown a little earlier in this thread:

Last email address I had for him is donutsandwine@gmail.com.

I agree with Josh. I’ve hung out with Alex a few times and he’s really a nice guy. I think he forgets because he gets really chilled out and gets doing something else.

But yea, contact Anthony or that other guy… forget his name now but I’ll find him.

Amazing how many people in the yoyo community are “forgetful” when it comes to following through with a deal. Time and time again we’re told to give traders or manufacturers who rip people off a break because oh it’s not their fault, they’re just forgetful. Sorry, but try that in any other line of work and you’d be laughed out of a job and probably have legal action pursued against you. Good luck OP, hope it works out for you.

Oh, it bothers me too. I’ve never understood how someone can “forget to ship” or whatever the excuse may be. The thing is, he used to have someone doing all of this stuff for him, probably because he is so “forgetful”.

Pasquale! That’s who it was… He may have a RecRev_Pasquale name on here, I can’t remember. He used to take care of a lot of this stuff and he’s a really nice guy. Maybe you can find him.

Also, I was supposed to be a tester for some of his prototypes but I never got any yoyos from him

File a PayPal claim if you can, although it might be too late.

Also, will everyone PLEASE STOP SENDING ALEX KIM YOUR MONEY! He has been ripping people off for YEARS now and for whatever reason everyone just keeps on giving him opportunity to do it again.

It’s too bad, cause they make some damn good yoyos.

Wow, I see alex every other week, I could ask him for you. what is your name on FB or some other thing I could give him to contact you. Honestly I think this should be in traders feedback.

I think maybe you could contact one of the other RecRev guys. If I’m correct, Joseph Colwell is his name.

Wow, I see alex every other week, I could ask him for you. what is your name on FB or some other thing I could give him to contact you. Honestly I think this should be in traders feedback.

thanks for the generous offer, I’ve sent you a PM.

As for Traders Feedback: since this was not stemming from a trade here on the forum, I thought it best to be posted in the General forum. For a moment, I was considering the Manufactures Forum as well.

And so far it’s not a feeback. Sure, I haven’t received the yoyos, yet, but I don’t know what’s happened. Richt now, I’m still in the process of sorting things out. I still hope that things will work out and some of the comments suggest that there might be a happy end to this - although some paint a little darker picture of the outcome.