I’d like to see a yoyo competition reality show. The contestants would be top players, gathered in a cool location. Each day the contestants would face a challenge in the form of a classic trick. They would perform their take on the trick for a panel of top judges, including the originator of the classic trick, when possible. The two last place finishers would then face off in a yoyo battle, with the loser of the battle then going home. When there are only three contestants left, there would be a final challenge, in the form of a new routine, and the winner would be awarded an awesome yoyo trophy, and $1,000,000.

Lets be realistic now, we can surely agree that a $10 titanium hybrid available in every local toy store and in the hands of every man,woman and child is a more realistic scenario than this preposterous suggestion.

I want to see Duncan to put out a new version of the Butterfly with pad response and a metal bearing seat that’s compatible with both slim and full sized C bearings.

Fr @AndreBoulay ’s dark magic 2 is one of the best throws of all time it’s so unique feeling… we need a new version! Threw mine today and questioned why I don’t throw it more

I have some questions about this - for woodworkers, are there particular good sizes to use for pieces like this? eg. should I try to make whole number metric diameters and depths? Imperial measurements? and so on.

I measured the Cabal bearing kit I have, and it’s all Imperial.

I wouldn’t mind a mix of whole number metric and imperial units (but definitely no finer than 64ths; 16ths is more ideal).

For things like the bearing seat/pad insert and the outer cap, it’s nice to be able to bore out those spaces with a forstner bit, rather than have to use a gouge or carbide tool. It’s easier and more repeatable that way.

As a practical example, if you made a MR85 bearing seat/response pad disk (using the same pads as the RBC), the disk would probably end up being about 3/4” diameter or a little larger at 20mm. Better to have a diameter like than than 47/64” or 19mm since folks are less likely to have those bits.

I would love to see One Drop make a bi-metal…

If it was up to me, metric all the way.

My vote is below, and I’m sure @SR1 could go further with it or add on ideas and maybe twist @the_general 's arm, lol?

A titanium or delrin collab with Onedrop

No idea if a new design would be good, or if an old favorite would fit in this model.

Oh, and an in general thing across the board?

Dude… I’d kill for a “TiStar” if it were a titanium 5 Star. Would go super hard

Also down for a Magnum in Delrin, sounds super interesting - would be cool to have the name be a play on Delrin somehow, like Magnum is a play on Magnesium

@the_general, Richie’s out here with some pretty damn good ideas 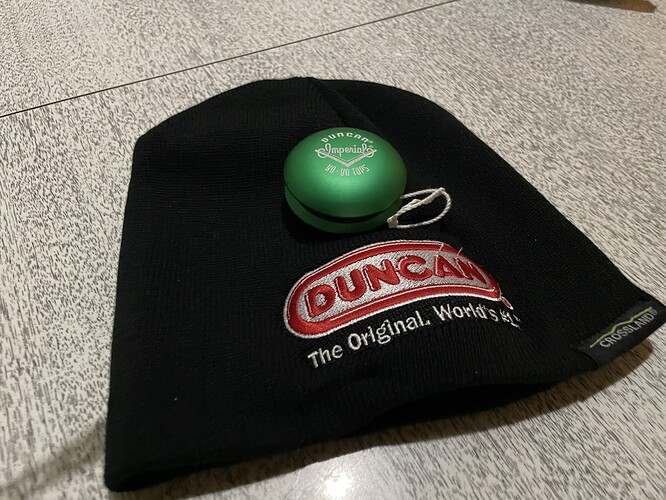 image4032×3024 3.51 MB
I would love to see a new Professional model based on the guts of the new Imperial! Just slim the outside down more to make the halves closer to the old professional style and put the awesome phoenix back on it!
I love how the new imperial plays. It’s challenging with the small gap but it just makes you be more precise with your throws.
@bjardin any hope you could make it happen? Or is it already in the process?
Also I would love to see Mr Yo-yo make a come back to Duncan as a mascot in advertising and on yo-yos.
8 Likes
yoyo_cubicle (Ray) January 29, 2023, 1:40pm 36

I’d love to see weekend-long yoyo camps for adults. There would be workshops during the day for different styles, themes, and topics, all given by the best yoyoers from different eras. We’d all chow down on delicious food together at mealtimes, and hang around in the evening talking, throwing, and having the time of our life.

I would like to see more companies focus on ano

I’d actually like to see this as well, but with an emphasis on color range of solids.

I don’t like splashes, but the current range of colors provided by the big manufacturers is actually pretty bad. Especially on non-6061 yoyos the range gets even worse. Pale colors and complex tones are rare, and instead we mostly get ugly super-saturated simple colors. (The big manufacturers offer a huge range of tones to select from… but they’re really dropping the ball on actually being able to recreate them.)

This yoyo was trying to achieve the same target color. On the right was the first attempt at it four years ago, and only last year did they finally nail the target color they wanted on the left (this yoyo isn’t 6061). It took time and practice to achieve an olive color on A300 that was actually “olive green” and not “dehydrated piss yellow.” 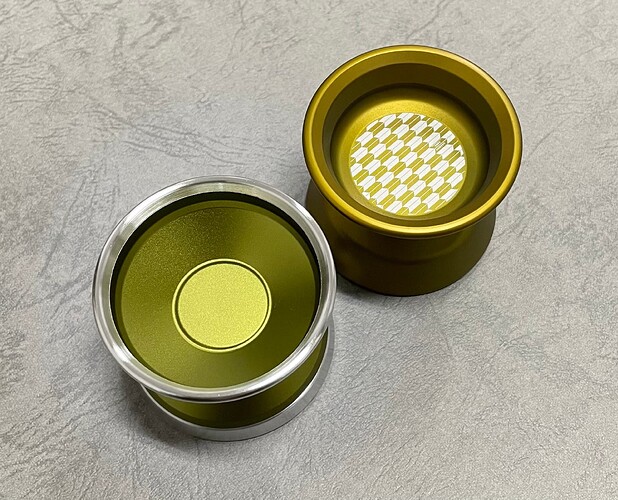 I think I would really enjoy seeing more original designs. Though I adore the new mono metal kodiak (it’s honestly one of my favorites) it’s an idea that has been rehashed and refined over the past ten+ years. Starting with (I think) the bonfire (or arctic circle) the idea has diverged and morphed into what it is today with it’s close cousin the boy. G2 has taken to shrinking their legacy designs and calling them the mini something or another and I now have no interest in them. They were cool at first but after 15 iterations of the banshee I’m not interested. ART started with the grail and shrunk them down and threw progressively smaller bearings in the for the dale and quail.

I’m also a hypocrite. I say all this while I devour what RSO models I can afford, will actively support the leaf (apparently a modernized chief), and will not doubt buy additional colorways of the kodiak.

It’s just seems to me that some designs were lightning in a bottle and they are trying to recapture that. Whether it be nostalgia or whatever made them have a broad appeal.

But take all this with a grain of salt. I want new but also love old? Old is sometimes good and that good never goes bad. Something new would just be nice.

Motion and Zgrt certainly have creative and original designs recently and upcoming for 2023, especially Zgrt.