The other day I made a thread asking about your favorite companies/manufacturers and a lot of you gave great answers. So I started researching a few of these companies mentioned (Mowl, C3, and Yoyofriends). I got really intrigued and started to do some window shopping lol. So with that being said, out of these three which one would you go with and more specifically which throw and why? What do you like about it specifically?

Edit: shape, weight, size, material does not matter to me here! I’m trying to expand my horizons with different throws than I’m accustomed to so anything and everything is welcomed for mentioning/recommending!

I think the YoYoFriends Peregrine is simultaneously one of the best performing and highest quality, most premium feeling yoyos you can get for the money right now. Don’t tell anyone, but I like it more than my Draupnir lol.

If you’re looking for something a little different, maybe on the organic side of things - you can’t go wrong with the Mowl Q. It’s referred to as the “Japanese Grail” sometimes. And I actually think it’s a better yoyo than the Grail (although it is lighter for sure).

Depends on what you’re looking for. Mowl and yoyofriends both make some great organics and they all 3 have great competition shapes in their catalogues. If I had to choose it’d be yoyofriends, because the Koi is a stellar modern O with specs that are Goldilocks “just right” for me. Mowl makes some really unique stuff, though, so they’d be a close second.

Surveillance if you want their “best” and most “mowl” yoyo. It’s their flagship for a reason. It’s super rim weighted, yet the super thin walls of 7075 al and a big inner lip don’t make it feel heavy on the string at all. If hate the feeling of kickback though, you’ll hate this yoyo. If you’ve never felt kickback on a yoyo, this is one to try lol. Vigilancia or Surveil would be fine options, but if you want to try this shape definitely just get the Surveillance.

M if you want their “entry” model. It’s kind of like a YYF(actory) genesis but with a slightly different and more modern flavor. Good yoyo, but I’d only pick this up over the other options if you really like the shape or it’s all that’s in your budget. It was one of their first releases, so it’s been a longtime staple of Mowl’s lineup.

Q or Obsession if you’re more of an organic kind of person. Q is a more casual throw, tighter gap, lower rim weight, less stable. Obsession is more of the stepped response, rim weighted, performance focused side of organics. Obsession is good if a bit standard fare, I’d say the Q is the more interesting and unique choice if you want an organic.

It’s entirely up to you, part of what makes Mowl yoyos so neat is their art though. So if something like the Infiltrate or Nocturnal is speaking more to you, get one of those instead.

If hate the feeling of kickback though, you’ll hate this yoyo. If you’ve never felt kickback on a yoyo, this is one to try lol.

This is interesting. I have never felt kickback on my Mowl Surveillance. It is powerful, don’t get me wrong, but it doesn’t really have that kickback feeling when you throw it. It is far more controllable when thrown than something like the Kraken, which does have pretty significant kickback. I’m not a fan of kickback, so I wouldn’t like the Surveillance so much if it had kickback (it’s my second favourite yoyo).

Unless the kickback you’re referring to is something else, I have to disagree here.

To answer the question, most of the others here have given great recommendations for the yo-yos of the 3 brands, but I’ll add a few more, especially for C3.

For YoYoFriends, they specialise in performance bimetals that play nimble and fast while still being very stable. Their most successful yoyo and the one that put their name out there is the Hummingbird. I highly recommend you get one of them if you want to know how they came to be so popular. It is mind blowing the first time you play with it. Other yo-yos you can try that are similar are the Peregrine and the new Tachyon. The Peregrine is said to be more stable than the Hummingbird and is slightly less nimble in play due to its increased weight. The Tachyon is completely new, but from the looks of things it seems to be a lighter, faster and more powerful version of the Hummingbird. If you want to go for organics, try the Koi.

For Mowl, their flagship is the Surveillance which is ridiculously popular. It has had so many runs and they sell out pretty much instantly all the time (except now, there are tons in stock right now). The amazing thing about the Surveillance is how Mowl has managed to pack so much power and stability into a yoyo, which still maintaining its manoeuvrability and nimbleness on the string. Usually H shapes are slow and reluctant movers, but the Surveillance completely destroys that stereotype and has managed to be easy to manoeuvre despite the ridiculous amount of power it has. If you want an organic, go with the Mowl Q.

For C3, it’s a bit more difficult, but currently their most popular model is the plastic Speedaholic XX and for good reason. It’s a cheap budget plastic yoyo that is very smooth and plays fantastically. It also does grinds and finger spins which isn’t usually the case for plastics, especially for grinds. It is pretty stable on the string and is decently manoeuvrable, not the fastest, but it’s not reluctant. You should get one to carry around with you everywhere you go since it can take a beating and is easily replaceable. If you want a metal yoyo that is on the budget side you should go with the Cyber Crash, very well playing yoyo for the money. It plays on the lighter and more nimble side but it’s still plenty stable for your needs. For more expensive options, two of C3’s most popular lines, the Crash series and the Galaxy series, are good places to start. The Crash series are more for regularly sized yo-yos while the Galaxy series is for yo-yos that are really wide. The Cyber Crash is a nice introduction to the Crash series, after which you can go with the Digamma Crash, the Atomic Crash (if you can find one) and the Hydrogen Crash. For the Galaxy series, you should go with the Galaxy Diver 7075 V2 or the Galaxy Dinosaur.

To most people, performance and “feel good” fun factor are on opposite sides of the spectrum, so it depends what you’re after.

Performance such as spin time, stability, acceleration etc. is objective but what makes a yo-yo “feel good” is very subjective and different to everyone.
Most people would say, a high performing competition yo-yo can be quite stale and boring and lacks that “feel good” fun factor or a soul.

Yoyofriends and C3 both have some of the best performing yo-yos on the market but to me, their yo-yos lack soul. Not necessarily the case with all their models but both C3 and Yoyofriends are geared mostly towards competition.
Mowl yo-yos are also performance orientated but have a unique string feeling distinct to the brand and have a lot more soul in my opinion. Mowl yo-yos feel special and like Mable said, what really sets Mowl apart is the beautiful artwork and engravings.
Mowl packaging is also unique and there’s an enjoyable unboxing experience which would appeal more to collectors.

C3 is from HongKong, Yoyofriends are from China, and Mowl are from Japan.
The pride taken in the Mowl brand, which can often be seen in other brands from Japan even those outside of yo-yoing, is definitely present with Mowl.

In the monometal category I’d highly recommend the Q (organic) or the M (H shape).

And in the bimetal category I’d highly recommend the Surveillance (V/H Shape) or the Obsession+ (Organic).

This image illustrates it well. Orange is the arc the yoyo (G&E4) took when it had a 5mm gap which gave it too much kickback, green is the arc of the same yoyo but with a narrowed gap width to reduce kickback. 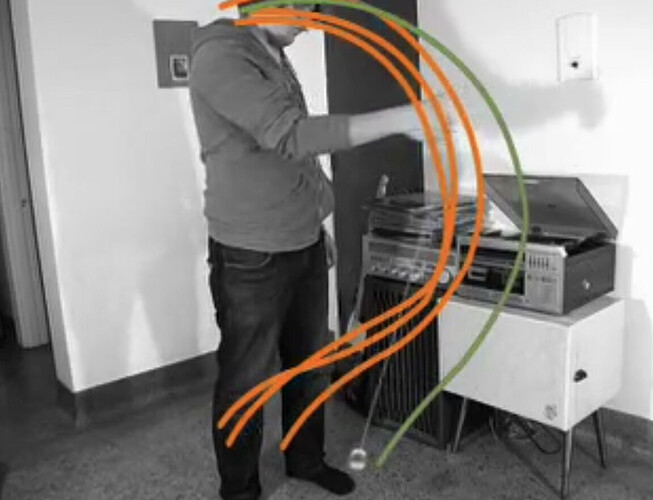 Very interesting, I’ll have to test the Mowl Surveillance against other yo-yos, especially my organics to see it. Because for me, I don’t feel the kickback at all. On the OneDrop Kraken however, the kickback is pretty strong.

I’m just popping in to repeat my mantra that Everyone Who Can Afford A More Expensive Yoyo Should Also Own A Speedaholic XX.

But seriously, at $28 it’s a shockingly good throw and a really tough daily that still has excellent performance. I own three (teal one, glowy one and a second teal one in the fallout shelter for post-WW3 entertainment).

I own much nicer throws but the Speedy XX still gets picked up from time to time.

The C3 shop has mono-metal B-grades for cheap. I got a MOVE ($10 but no longer in stock) that doesn’t seem to have any problems and a Krown ($15) that has a light but long scratch on the outside of one of the cups. I think shipping from Hong Kong was something like $12?

If you wanted to go this route, I’d suggest you get two Krowns and hope to be lucky enough to half-swap to one A-grade and one B-grade that you could use as a beater.

My only note of caution is that I didn’t get any email to let me know that the package shipped, no tracking number, and no reply when I emailed after a week to check on the shipping status (because I didn’t even know it shipped). If that makes you nervous, then look elsewhere.

I agree. I don’t post much, but when I do, the Speedaholic is usually mentioned somewhere

I commented on your original post and still vote getting a c3 krown. For me the krown stability and spin time is amazing for the price. The krown also has a strange floaty feel I don’t get from any of my other throws and a great sound… but that being said I agree everyone should own a speedahlic xx.