Re learning how to type

Took typing in high school and did pretty well on the typing tests. They took the number of words you types, subtracted one word per mistake, and gave you a total. Being a drummer and piano player I managed to stay above 70 words a minute. A friend of mine had fat fingers. She always ended up with a negative WPM.

A friend of mine had fat fingers. She always ended up with a negative WPM.

I currently type about 10 WPM

Keep going @smileypants707! Last year in Nevember I was typing at that speed. Now I’m around 50wpm.

I honestly wonder if I’m of pretty low intelligence sometimes, because it takes me a lot longer to learn pretty much anything than others around me. Thats good progress for a short time, I think.

Edit: Sorry @smileypants707, I realised I just responded to an old post.

It’s okay Glen, I resurrected this post from last year because I was bored and wanted to brag

I had begun the process of learning how to touch-type last year, and ended up fusing it with my old habits after a while. So it turned into me using the home row while also glancing at my hands very frequently. Hello tension headaches!

So I made it a point to practice on those websites at least once a day for about 20 minutes, I’ve seen a significant improvement in the last month

you should see my mom type.

not sure X WPM but i will ask.

To be fair I was still a kid and they seem to learn everything super quickly. Seems like learning and improving at a lot of skills takes longer as you grow older

I brought this up with my therapist…about how a lot of kids pick up yoing really quickly.

Her theory is that kids don’t subconsciously tell themselves they can’t do something before trying it as much as adults do…they just try it. Adults are filled with tons of doubts and insecurities that hold us back. Kids don’t have nearly as much of that barrier they have to break through.
Makes sense to me!

My goal is to get to a consistent 50wpm.

I read something in an art magazine awhile ago about how kids are fearless with art - tell a young boy to draw a dinosaur on a surf board wearing a baseball hat and eating a hotdog and he’ll do it. Ask an adult to do that - like me - and I’d be like: is it a big dinosaur? From what period? Is it a giant surfboard too? How can a dinosaur fit on a surfboard? I thought dinosaurs were vegetarians. Give me a little while to find some reference photos. Etc etc etc. i would totally overthink it. Kids don’t have as many experiences with failure so they don’t psyche themselves out as much as adults. Sorry if this isn’t adding to the conversation.

Probably nobody here will care, but I thought it’d be interesting to mention since it’s a thread on typing.

When I was first learning to type about 10 years ago I learned about this guy named Sean Wrona, he was the fastest typist on typeracer by a significant margin and was generally considered the fastest in the world. Averaged about 180wpm with peaks at 250+.

Well, 10 years later, he’s still considered the fastest and still holds a lot of world records on different sites. He’s coming out with a book about the history of typing(from both competitive typing and innovation standpoint) from the invention of the typewriter in the 1800s up to the late 2000s or so I believe. Here’s his patreon if anyone wants to check it out: http://www.patreon.com/seanwrona/

See if you can read faster than he types! 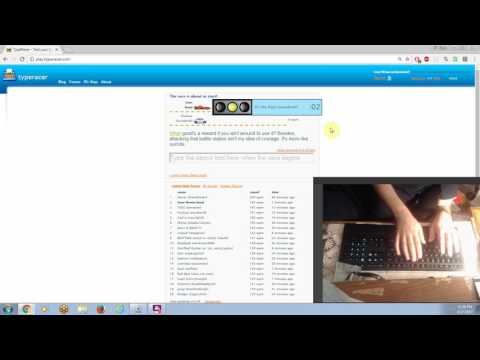