I decided to do a little project, and photograph each of my yo-yos, to create a gallery. I thought it would be easier to have the pictures on hand if I ever want to use them for anything. I have no experience with photography, and I wanted to make some nice photos. I’ve been looking at Stickman and Jason Wong’s photos, and I was inspired to use some stuff around the house to get a yo-yo photo shoot going.

Well, first, I made myself a homemade light box for the yo-yos, trying to get a nice clean shot. I made one at home with a cardboard box, cut up T-shirt. I used some utility clamp lights, cost about $7 each at the hardware store, and florescent bulbs. I already had a desk lamp, so I used that as the third light. I had a fairly cheap digital camera that I bought two years ago, 8MP, Olympus, nothing special, a fairly basic compact camera.

Anyway, I took a chair and put the box on the chair, set the lights up around it, and started taking some pictures. I struggled with the white balance on the photos, because my camera does not have a custom white balance setting. I used the windows software, already on my laptop, and used the auto adjust feature, and that was it. I’m happy with the photos, compared to the ones I have been posting on the forum before, so it is a step up. I haven’t finished photographing all the throws, but this is the result: 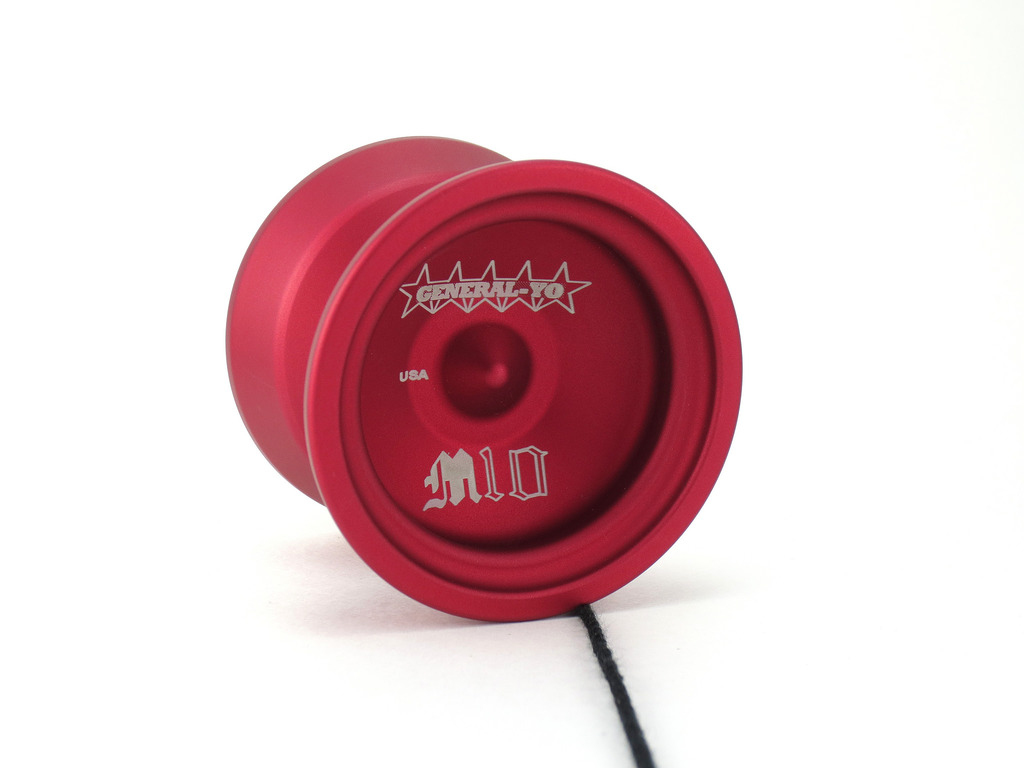 Let me know if you guys have any more ideas to get better results on the cheap. Mgiroux77 says the photos would be better without the string. I purposely left the string on as a sort of “trademark” to show that they are mine. The string is in most of the photos, black and double looped too.

I think they came out pretty nice. The string doesn’t detract IMO. Can you post a couple of pics of your light box here?

Thanks guys, you will get a good laugh out of this. I think this will be helpful for anyone who wants to take better photos for threads or anything really. Well, I took most of the tips from the following video. Actually, if you frustrate easily, I recommend you find a cheap one of these things for like $15 online, called a light box or light tent,…they are out there. I was ready to get started, so I made one at home the same day. It is a pathetic looking thing, but it worked, so I have to give credit to the Youtube poster:

Trouble was, I had to improvise cause I used a small box. I also got impatient, so I didn’t do things nice and neat. I was ready to take my pictures. You will see in some of the shots that a bigger box would have helped.

Here is my sad little box, and my makeshift studio lights 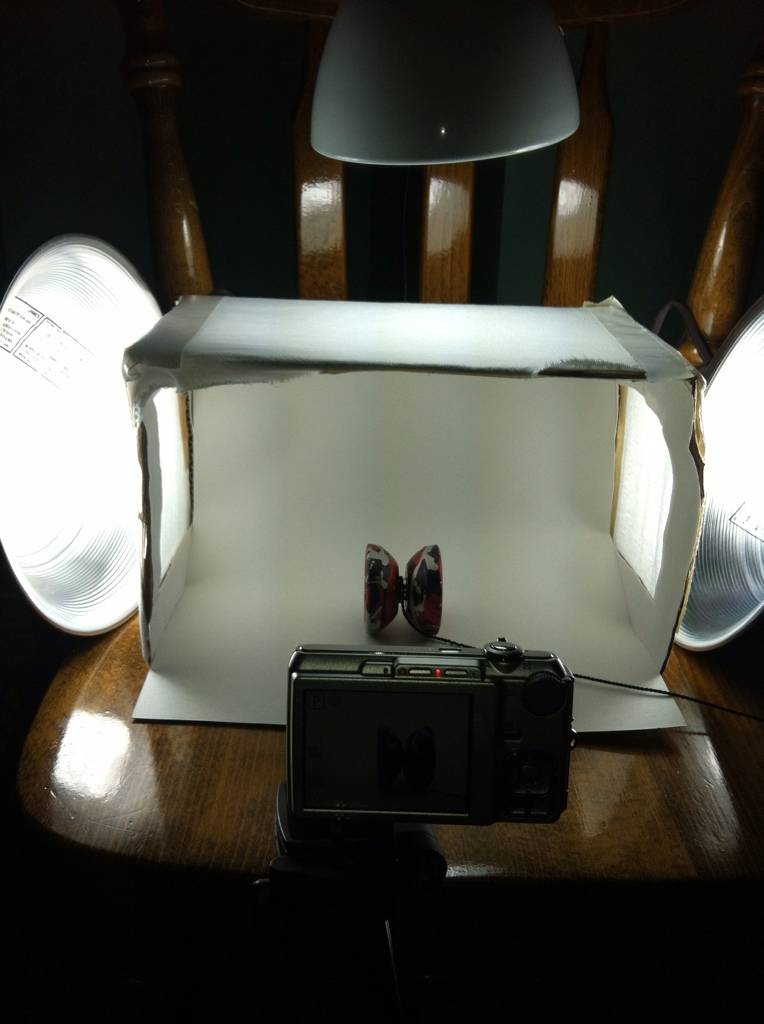 I also struggled with the type of bulbs, so it was a trial and error, that finally came out good. I recommend this for anyone. Also, if you don’t have a camera, but you have an iphone camera or similar, that will do. They will not be as clear, but a lot better than the average online photo. This picture was taken with my iphone camera…same setup: 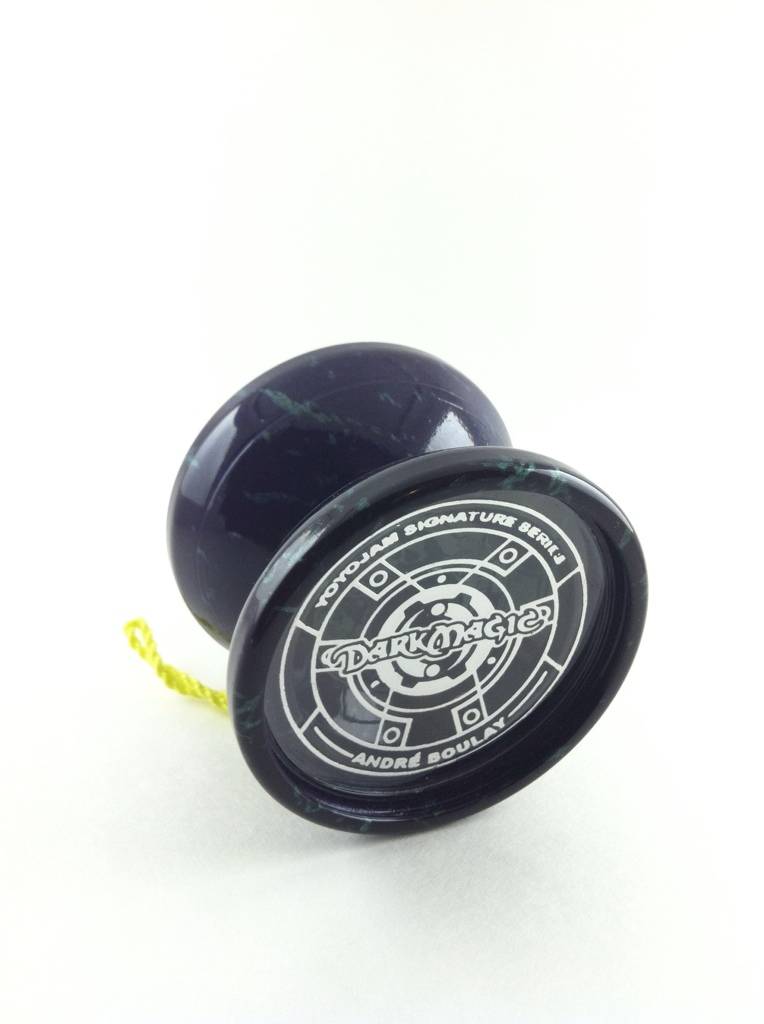 Nice job! I know i couldn’t do that good I liked the pictures. Also you have a Huge Yoyo collection! Wow…

Nice collection! My only suggestion is to find a way to light the yoyo more from the front. The way you have it set up now, the light is pointed at the yoyos from the rearish and makes the front of the yoyo dark. It may be a little hard for you to do with your setup because your side diffusing panels are a little small, but see if you can move the yoyos back and point the lights at the front of the yoyo. Ideally, you’d want about a 45 degree angle between your yoyo and your light. I’ll try to draw a diagram to show what I’m talking about.

That’s a great idea. That is exactly the problem I was having with the front being a bit too dark. I thought the lights had to shine directly in the sides of the box. Makes sense, I will try that tomorrow. The new angle for the side lights, and leave that one light at the top. Also, I got a light tent in the mail, found one for $13 online, and got it quick. That will give me a bit more room than the box to push the yo-yos back further. I didn’t have much room in the small box. I will post the new results soon. Thanks.

Now you have to retake all those pics… :-\

Now you have to retake all those pics… :-\

Yeah right…no way!! I will just get them better from now on.

I already took all those pictures like 3 or 4 different times. No more re-takes on those lol. Maybe that Eh, cause I’m curious if it can get any better…it looks great.

True Abby, if you see the ones I have up there now, you can see why I needed to step it up. Haha.

Amazing collection. The lighting more from the front suggestion was bang on (beat me to it!) but other than that, just a great set of photos.

Amazing what you managed to do with white balance when your camera wouldn’t allow custom. Came out great. I’m no good at selecting white balance during a shoot, so I just shoot RAW and if I find my light balance is off later, I just fix it in Adobe Lightroom or Photoshop.

Okay, lopazopy suggested the new lighting angle, and GregP agrees, so I tried it with my new light box and you will see the difference. By the way, the new light box folds flat so you can put it away, and it comes with different color backgrounds, red, blue, white and black. I ironed the white one to get the wrinkles out, but just used the black as a test without ironing it. It attaches with velcro. $13 for the box: 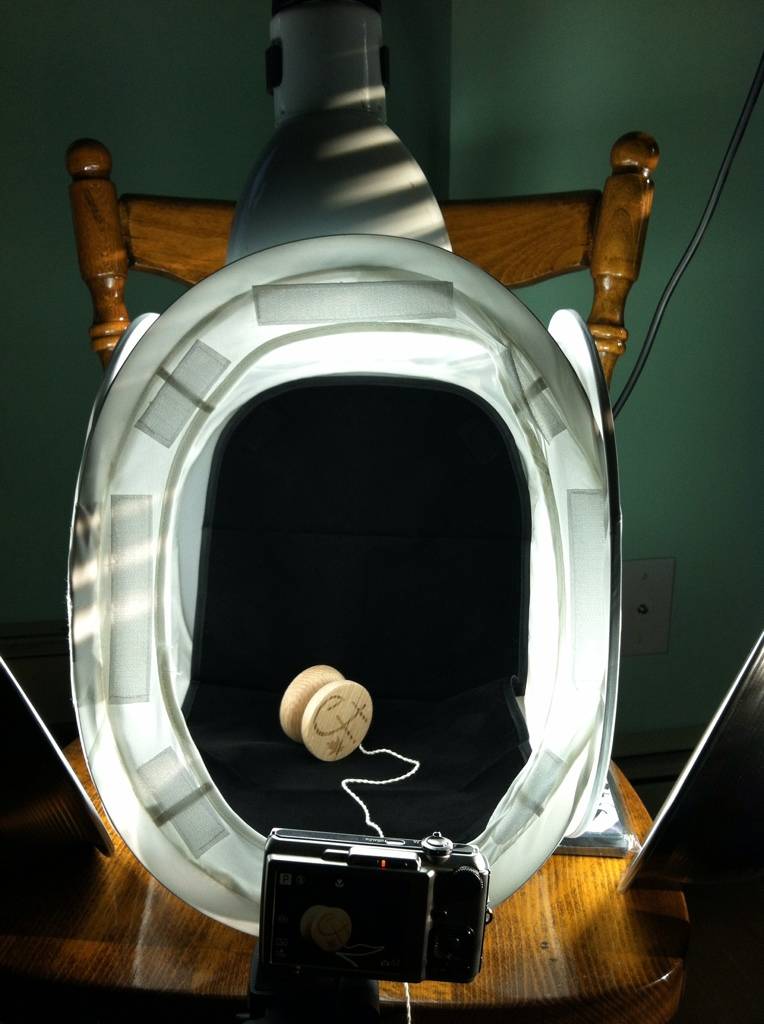 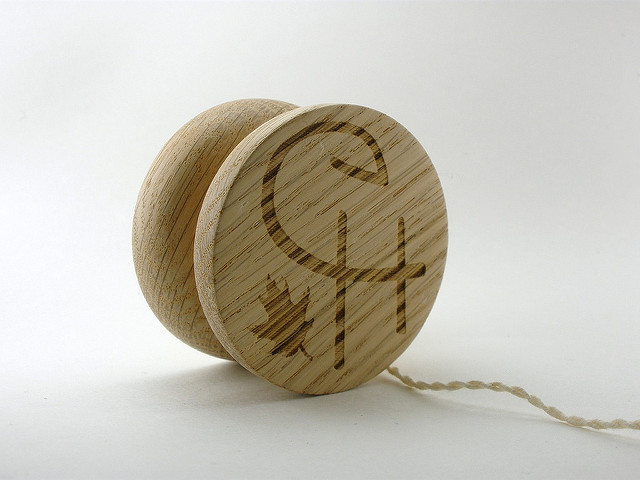 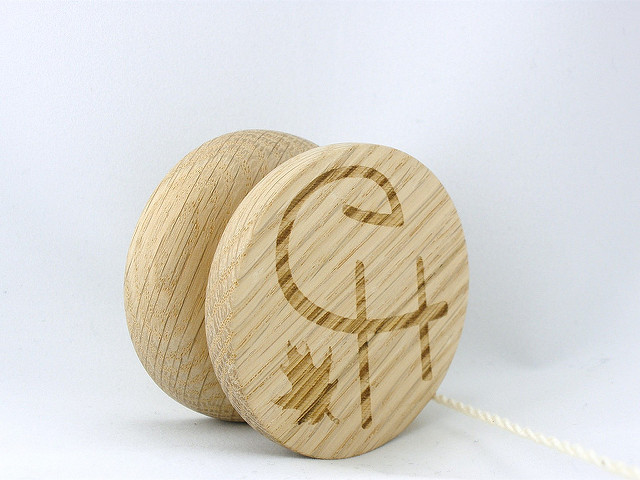 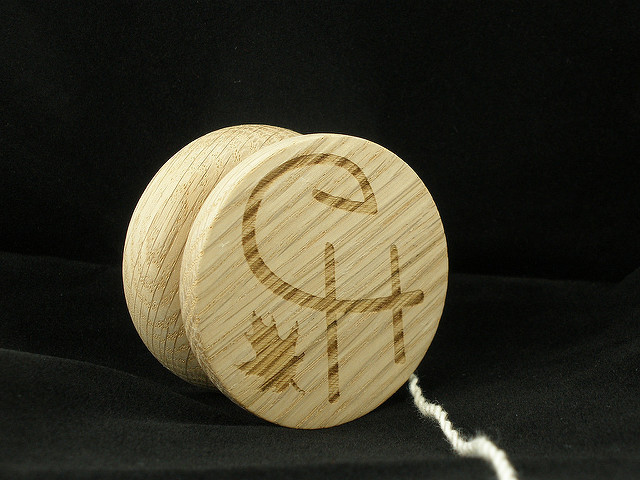 Thanks for the help, I’m very happy with these photos now. I’ll post again, with some really nice shots using the new setup, and old setup. I realize that sometimes a good photo just happens by accident too. I’m having some fun with it.

Awesome! Definitely an improvement already, though the originals were interesting and well done, too. If you have the ability (I can’t tell from the setup) to have one of the sides a little bit dimmer (move the light source away from the box a bit?) it will add some dimension as well.

Using the EH sample pics above, you would dim the left hand source a bit. The right source will illuminate the front of the yoyo, and the left source will contribute while at the same time leaving a bit of shadow in the gap.

Never know if it’ll work until you try it, though! The theory is sound, but then there’s the practice. Gotta pick which one looks better, not which one has better theory!

WOW that EH on the black background is stunning!!!

You have to at least redo all the YYE editions on the black back ground!!!

Awesome! Definitely an improvement already, though the originals were interesting and well done, too. If you have the ability (I can’t tell from the setup) to have one of the sides a little bit dimmer (move the light source away from the box a bit?) it will add some dimension as well.

Using the EH sample pics above, you would dim the left hand source a bit. The right source will illuminate the front of the yoyo, and the left source will contribute while at the same time leaving a bit of shadow in the gap.

Never know if it’ll work until you try it, though! The theory is sound, but then there’s the practice. Gotta pick which one looks better, not which one has better theory!

You’re totally right, definitely worth experimenting with moving the lights around to get different shadowing, or highlight certain areas of the yo-yo. It takes a lot of patience doing this, but it’s cool to do. I have a few more yo-yos to do, but updated the slide show with about 40-50 more, mostly plastics and bi-metals. That light box comes with a cover on the front, that has a hole, and you can stick the lens of the camera in the hole…supposed to prevent reflection from the front of the box. I did not use it, but I’ll test out using it with the plastics, to prevent images showing in the mirror caps.

You raise a good point, the lighting is so much better in the second photo, but for the wood, the shadow actually adds something interesting to bring out the wood grains. I just think the shadowing is in the wrong place. Your idea of moving the lights around will help get the best photo, especially of that particular yo-yo.

Taking the photos was great, but unwinding all those strings and rewinding them to put each yo-yo back was really tedious. I’m almost caught up now, where I’ll just have to photo any new ones that come along. I maybe have ten more to do today, then I’ll be done with this project. I’m definitely going to stick some other stuff in that box, and play around with taking pictures though. Maybe put some leather holders in there and see how they come out.

I just read the comment from mgiroux77. I think you’re right, the YYE Editions should be done over again, until they are perfect. I am on vacation now, perfect time to get the job done.

Now, I have a problem. I’m having so much fun, that I want a super big light box, so I can stick my whole yo-yo case in there and take a picture of the whole case nice and clear. That has to be how Stickman is getting those great shots

Well, maybe someday. I’ll expand, but I’m having fun with the small box for now.

Looking good! I’m really digging the black background. I’m glad you found something that works for you and are having fun with your photo project. Keep up the good work.

Looking good! I’m really digging the black background. I’m glad you found something that works for you and are having fun with your photo project. Keep up the good work.

Thanks so much for your help, all of you guys have been great with feedback. I’ll occasionally post to let you know how it’s coming along. Since the black background has gotten a few thumbs up, I’m going to experiment more with it.

…all your yo-yos have knots in them.

Or so you think…