Your favorite yoyojams back in the day?

I guess it would have to be this well loved
Night Moves 5 ( missing caps ??? ) it is in my collection as a place holder, my 1st bi-metal. The well loved Night Moves 5 is the only Jam I have. I like the way it has aged. 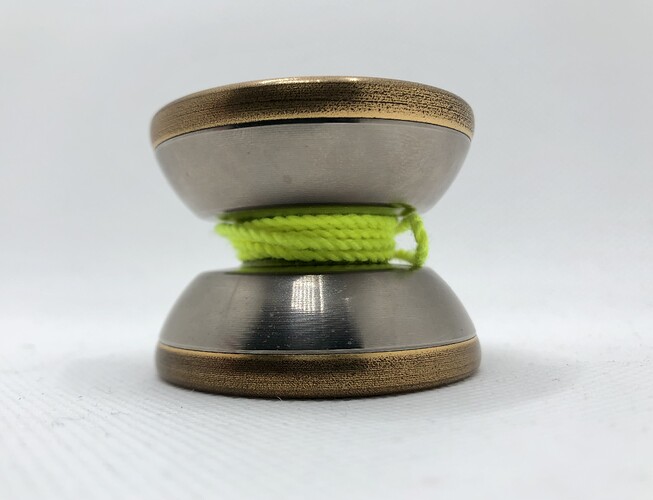 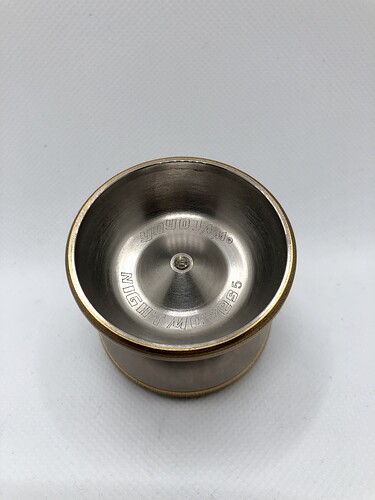 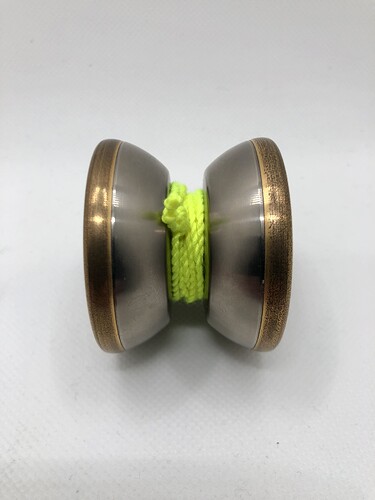 I don’t know if this is considered from ‘back in the day’, but the YYJ Classic was a big favourite of mine. I’m not sure there is available today with better price for performance value. 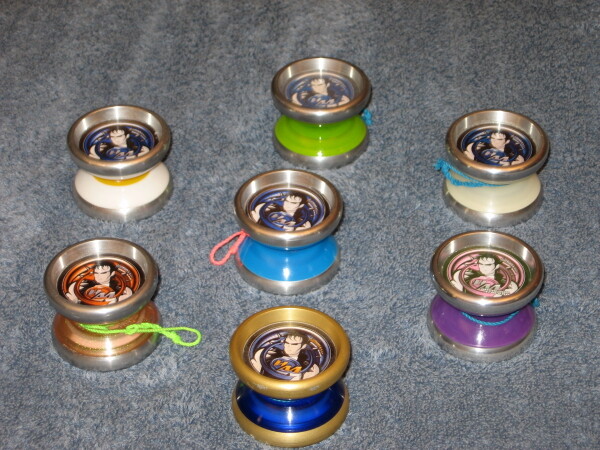 These are still played regularly. My other favorites are the Jouney, DM II and the Hitman X.

I am not saying anything is wrong with yo-yos available today. I think yo-yos have just gotten better as time has passed.

That being said, I am not suggesting building any kind of shrine and singing about Yoyojam.

I spent most of the 3 days at the Custom booth. No problem there, it was fun.

The first break I took to stretch my legs, was a break that changed whatever my view of yo-yos/yo-yoing that I had at the time.

I saw a pretty redhead at a booth with a banner that said Yoyojam. Even then, being older than most of the crowd, Valerie asked me, ‘What brings you to Worlds’?

I told her I was with Custom for the weekend. I told her ‘I do things to yo-yos’. I told her I built Custom cars and Harley motorcycles but as a hobby, I was fascinated with trying to make yo-yos that performed better.

She said, ‘Let me introduce you to my father. Dad(Dale) this is Mo. He customizes yo-yos’. I talked to Dale for 10 minutes and it was like we already knew each other for decades. Two old hot rodders that fiddle with yo-yos, go figure…

Dale and everybody associated with Yoyojam over the years absolutely left a positive imprint on the advancement of yo-yo performance. It’s indelible. It’s factual. And it’s above contradiction.
Dale Bell, the Tinkering Genius, touched people all over the planet. He didn’t even need the money. He was already a multimillionaire. He could afford to be a big kid and have some fun.

If I didn’t call Dale every week, he would call me to see what was up?

…….i firmly believe that if most Yoyojams hadn’t died from Terminal cracking, they would still be ‘players’ today.

I really appreciate everybody that replies in this thread with nice memories of Yoyojam.

I asked Dale one day when we were doing our weekly Think-tanking(think tanking with Dale is when he has pretty much all the ideas already and he just bounced them off me for a second opinion, lol)…. Anyway, I asked Dale, ‘What are you in this for Dale? You don’t need the money. Dale without hesitation, simply said, ‘Mo, I want the kids to have better toys to play with’.

I was only able to get my hands on a Speed Maker and a Black Knight. So the Black Knight is my favorite. 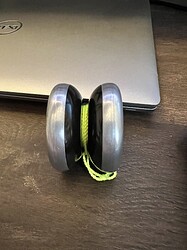 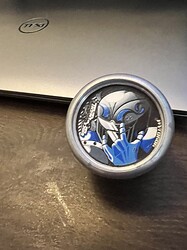 My collection for posterity.

The patriot and matrix were my first yoyo jams. The matrix hooked me on the shape, same bearing as the superyo renegade i had before it, and funky hybrid response. Learned a lot of tricks on it, including the matrix.

The patriot showed me what a floaty wide yoyo could do and introduced the large c bearing to us all. Still plays great with starburst response.

I banged the white xcon around till the caps flew out. All kinds of cracks in the shell. Replaced it with the blue marine ed one, still in good shape.

The copperhead is like a plastic speedmaker but with the heavy gravity material weight rings, another example of yyj innovating all the time.

The kickside, journey, meteor and axiom I found in random spots online last year. Kinda want a second kickside so i can halfswap 1 with only starburst and one with o rings. The hybrid half and half was cool at the time, innovation was ongoing, but i prefer either/or now. The double oring was a major improvement in my eyes, the precursor to recessed silicone mods and later silicone pads, like the design of the meteor and axiom. 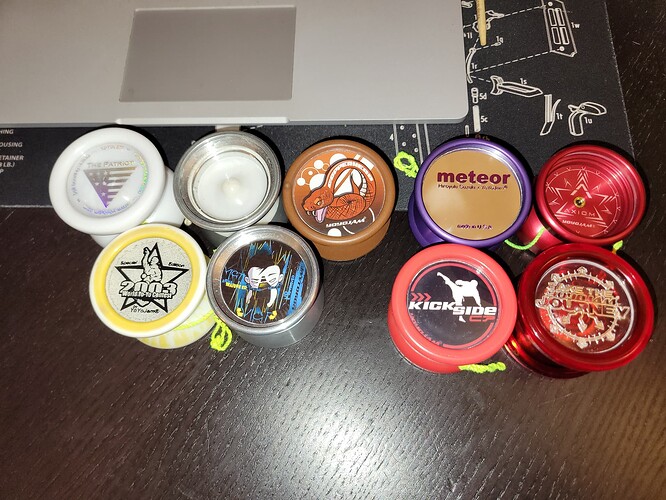 I’ve had so many YoYoJams over the years they were definitely one of my all time favorite companies and they produced some of the best yoyos ever.

For me, forever and always the Night Moves lineup will be my pick. Specifically Night Moves 2. The 2 is my favorite of the series. I also liked the original and 3 as well, but the 2 just spoke to me. I love the shape and size. If I ever had a signature YoYo, it would definitely be modeled after the Night Moves 2.

The glow enyo body was sexy as heck! I had two clear glows, glow pink and a gold with red flames and a blue-green with green-ish flames and stupidly traded them all off

I also had a teal green enyo Night Moves 3 that was also pretty sweet. Boy I’d love to have those back haha!

I liked the Night Moves 4 but it just didn’t speak to me like the Night Moves 2. The heat wrap graphics were pretty cool though! I remember the one I had was wrapped in a mahogany wood print. I cut it off around the weight rings to expose the brass and it made a world of difference in the aesthetics. I had another one that I removed the whole wrap off of and the hub was glittery. They shouldn’t have covered them up haha! It was super cool looking. Kind of a rootbeer with gold glitter. I wasn’t a huge fan of the weird axle sleeve they used on the 4, it just didn’t feel right when playing. It’s been years since I played with a Night Moves 4 though, so maybe my opinion would change now days but I remember not really being into it too much.

Edit: found a pcture of the NM4 mentioned above. 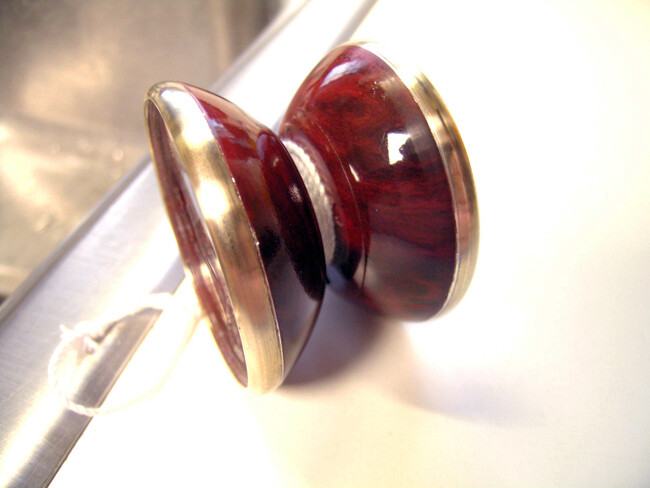 Never did manage to try a Night Moves 5, it was pretty interesting looking though and would love to try one.

Thank you for sharing that doc. Dale definitely made my childhood more fun with the yoyos he made.

I think my first email address I made in middle school in the 90s was spinfaktor@hotmail.com, lol, long gone due to spam

Played the Mini Mo-Tu and Hitman the most. Got the Lyn Fury from a trick ladder prize bag at BAC. Dark Magic (not pictured) cracked up. 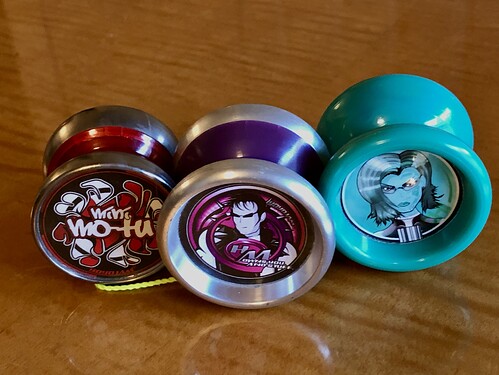 Still throwing my new breed to this day

I think my absolute favorite YYJ was the Karma…that thing was small and powerful. I still have it, ano is a bit worn from the daily use it had but still works fantastic.

Man… tough choice… i really loved the Kaos and the mini mo-tu. Sadly, my yyj’s are down to just a lyn fury these days.

All these photos are really bringing me back!

Question - has there been an attempt to bring back YYJ? Not homages, like iYoYo’s collection. I am genuinely asking to see if that would be possible. There seems to be enough interest.

Have you heard about Sturm Panzer? They pretty much did a rehash of the old yyj models and some are gimmicky even for competition use, the company started before yyj was disband in 2015.

edit: I misread your post but I think bring back yyj was impossible.

I learnt a lot of tricks with my Spin Master 2 about 20 years ago.

The best YYJ I’d say were XCon, Hitman and MiniMotu.

The Yoyojam SpinFaktor X is amazing. Released in 2010, and to my knowledge, the last in the SpinFaktor line.

The metal ring placement being more in the middle than the outside really makes for a nice change from the norm. It holds up amazing to today’s standards.

I only the Xcon and this. In my opinion, they really are a testament to how good yoyojam was. 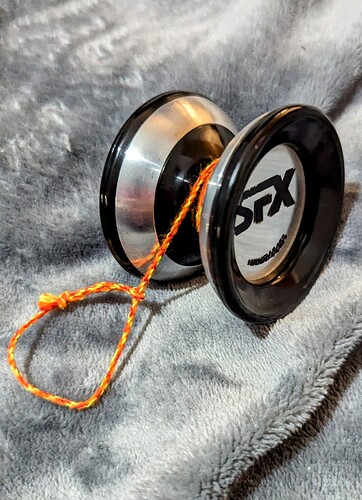 Hey! That little gem looks familiar! Glad you’re keeping the dust off of them my man! 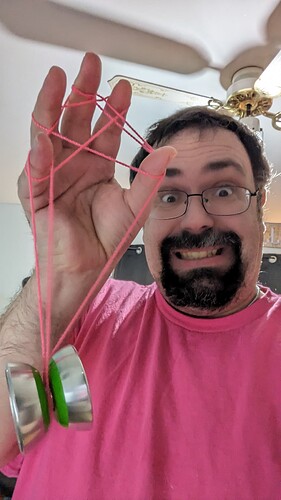 My favorite YYJ. I think it was the best looking also 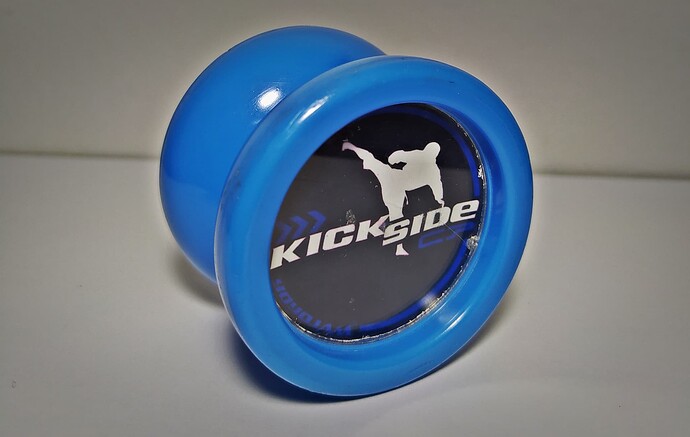 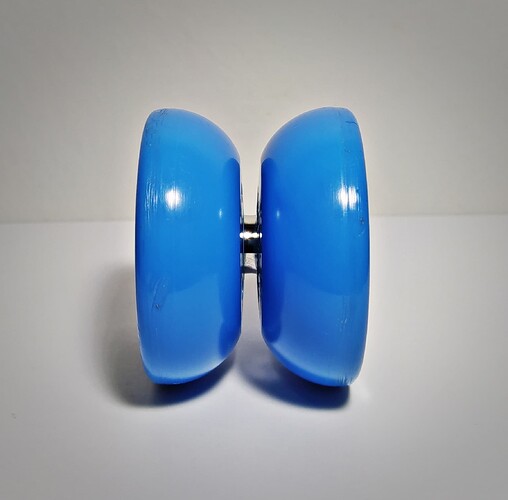 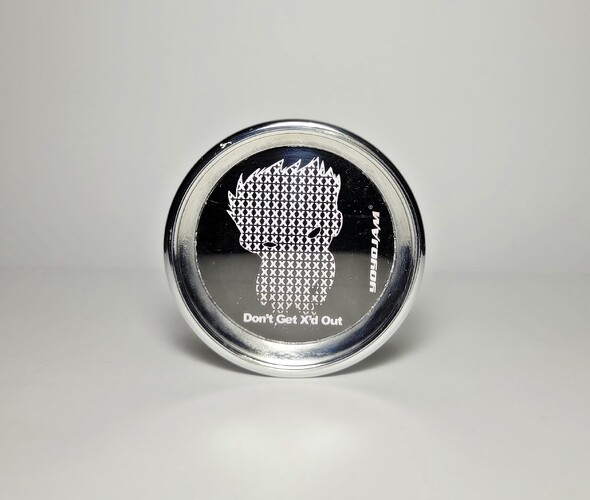 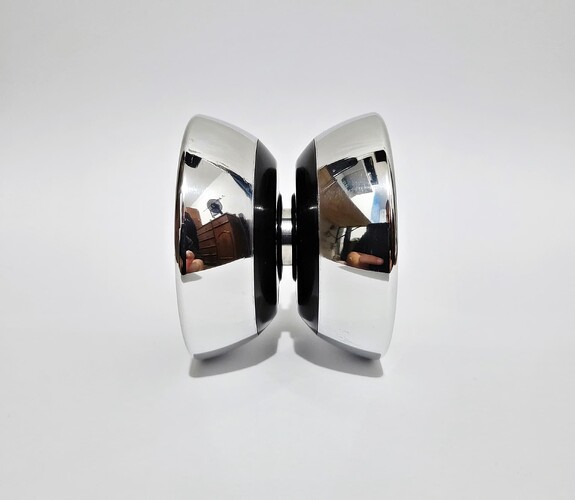 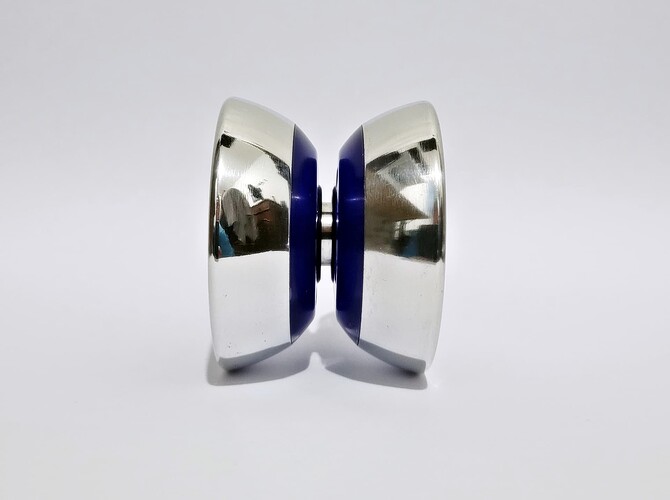 If u want to see more yyj’s, visit my Flickr! 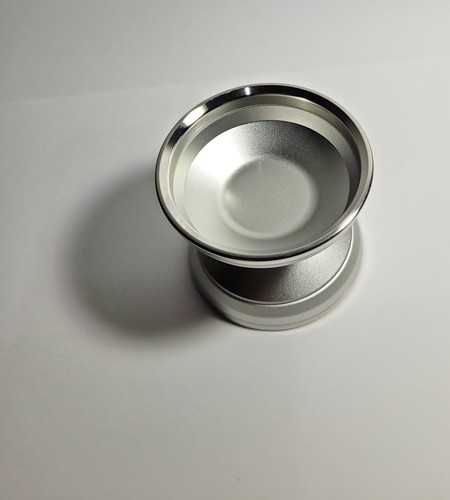