The elusive General Yo

The elusive General Yo!

I have been ready to purchase a General Yo so many times then just as it’s released or I find one on the bst, BAM, something happens that causes me to miss the opportunity. Once it was my internet connection, several times someone snagged the last one, someone beat me to it in the bst and the thread hadn’t been updated, or something happened where I needed the cash to handle a responsibility. It happens every time, every model, I just can’t seem to acquire one.

I believe that the General Yo and I may be destined to never meet. It’s a shame, it really is. Oh well, I’ll keep trying and maybe if the planets are in alignment and I’ve prepared for it maybe it will happen one day.

Elusive yoyos, not impossible to get, but just as you reach out to grasp one, poof, it disappears or the opportunity does.

Any elusive yoyos in your world?

Septopus… although that can be pretty impossible to get

“THE PROUD, THE RARE, GENERAL-YO”

I know Dingo and I been snatching them off the BST left and right… but if you need help getting a model… I can help you out. (Except the extremely rare ones)

Here’s the crown jewel of my Genyo collection

Here’s a tip: be willing to overpay.

Madhouse yoyos. The pop up so rarely because they are amazing.

The YoYoExpert exclusive Guy Wright Engraved Gold edition Punchline Repeater. Only 22 were produced. They came with a signed trading card by Guy Wright. Had a chance to get one, but I didn’t pull the trigger fast enough. Wish I had. …sigh 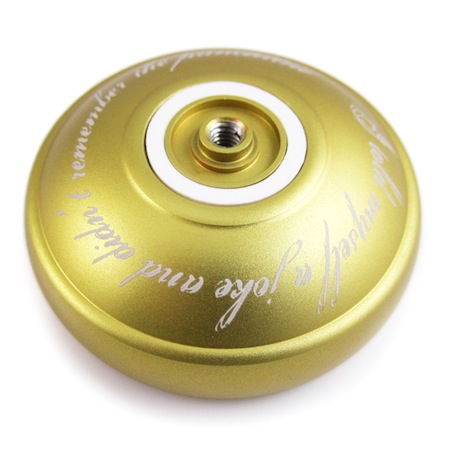 Wow, I used to have one of these in really good condition. I traded it a couple years ago for two brand new SPYY’s worth a couple hundred at that time–which I thought was a fantastic trade for me. I never would have thought it could have surpassed the $300 mark.

Gotta say, it seems as though CLYW Peaks have disappeared altogether from the BST.

Septopus… although that can be pretty impossible to get

And I’m proud to say I have both two general yos (entheos and a model 10) and a septopus. ;D

Mine is the Walrus Canvas:

I bought one that disappeared in the USPS system en route from CLYW, I have offered on one on the BST and was beaten to it by another offer that I couldn’t outbid, and there aren’t many of them to begin with; I’m sure I’ll never lay my hands on one

Lately? They’ve been decently popular and selling out since it’s conception…

For the record, I don’t care if anyone dislikes Genyo, doesn’t bother me in the slightest.

It’s happened to me with General yos. Be patient if you miss them. You’ll find them sooner or later. I need a BA Majesty!!

As for General Yo IMEO they deserve all the hype they get!!!

Eh, it was always really easy for me to get Genyos cause tons of people at PYYC have them. Like ALL of them save an OG torrent and I think a 5star. But if you got the right trade they were pretty easy to get.

I got a Torrent2 for a Maverick and a New Breed there, which I then traded for a JOEXANN genesis because the Torrent2 was ehhh. Won a prepro 7075 Majesty in one of the battles that Ernie very kindly donated it to. Then I traded that for a 1of2 Aman KLR. I also had the chance to get an Entheos, but I didn’t get it for who knows why.

As for General Yo IMEO they deserve all the hype they get!!!

I gotta agree, it is a shame that certain throws/colorways may never be obtained due to production(or lack there of). If it does exist and you have the resources(cash) and patience most any throw could be yours. Keep looking for the light at the end of the tunnel.

facepalm; about the facepalm

I have to agree with the NathanC on this one. The limited production and the direct-sales that General-Yo is doing certainly has contributed to this aura. It is almost like you need to be part of a special club. This has resulted in an elevated opinion about these throws due to its perceived exclusivity in the marketplace as well as the crowd-mentality that goes with a group of buyers with similar motivation.

Is the Model 10 really that great? Or, is it that the limited production of the Model 10 is in the hands of a group of people who have a vested interest in telling everyone what a fantastic throw it is?

And lastly; can we please stop claiming a yoyo is great because it is smooth? Almost all modern yo-yo’s are smooth. I have $50 yo-yo’s from China that are dead-smooth. Does that make them great?

To be honest, the model 10 wasnt that rare… It is -incredibly- easy to secure a genyo. They were sitting in stores while people whined of them being sold out. There are threads that document this.

According to your logic s.kon mods probably aren’t that good because they are limited and hard to obtain and typically takes an investment

And to answer your question, yes they are good. And i don’t say that biased. I’ve tried many a yoyo (like others in here lol) so i believe i can say for a fact they are good. Even when they aren’t made of 7075

I mean seriously, there are so many good yoyos nowadays… If you don’t like a brand keep steppin. I don’t come stepping on your toes about your yoyo preferences. so please, knock it off implying they aren’t great…

You’re free to think that. I’ve owned a Hatrick, 5 star, Essence, KLR, Entheos, and multiple Torrent II’s, not like my opinion is completely made up. They all played average at best. Maybe the Majesty and Model 10 are superb, i dunno, i am curious to try a Model 10 and probably will eventually, but for the rest i’ve played they were heavy, dull, lifeless, and with their fairly antiquated designs(other than the KLR and maybe the Entheos) played, if i’m being honest, pretty badly. As far as smoothness goes it’s just gotten ridiculous, are they smooth? Sure. Are 99% of modern high-end yoyos just as smooth? Yes. Is smoothness the main criteria that a yoyo should be judged by anyway? Of course not.

And yeah Geezer makes a good point with this whole inside club thing. Obviously Ernie’s free to do what he wants, but i see releasing products en masse to stores as a much better business model than a wink and a handshake over email to get that limited edition throw. Also don’t get me started on the colors, which are probably the most bland ever made, especially lately. Amazing how the popularity of the gorgeous green/purple German 5 Stars doesn’t make someone go hey, people like those bright rich colors, let’s do more of those, instead we get runs of of blue, red, clear, and black, which are so lackluster it’s sad.

Anyway i wasn’t saying they were overhyped to demean the fans, more to the new throwers who always seem to enter the scene in the midst of a hype-fest, to let them know they shouldn’t sell their souls for a GenYo on the B/S/T because a month from now the hype will have passed on and you’ll have a yoyo that’s a fine throw, but not made of gold like it seems.

Also it should be noted anytime someone says something other than glowing about General Yo, Ernie has Andre delete the post, which is a bit off-putting.

Was just curious how you came to the conclusion of next month or so the “hype” will be over? Can you elaborate