As many of you probably know, this summer has been named “The Summer of Titanium” (the name has actually been trademarked

). This thread is for discussion on this subject. What other companies do you think should jump into this fun?

It’s crazy, all of these yoyos and not enough money in my yoyo funds.

I think it would have been even more fun if so many companies did not drop a titanium at about the same time. YoyoFactory released one, and then the floodgates seemed to open up, after the drought last year. I guess we’d better get while the gettin’ is good, because there are no guarantees for next year, or the year after. :-\

Titanium Chief with wall thickness adjustments accordingly would be amazing.

Yeah you know I was thinking the same.

Yep. More spread out would be ideal. Would love to own each, but this barrage makes it hard to justify several thousand dollars in a 1-2 month span.

I am increasingly convinced that although titanium can give indisputable advantages, in the end aren’t so significant as to justify such a high price differential compared to yoyo in alloy, so I think that every brand can go this route, but it is only a small path landlocked.

But this “flood” is based on the fact that Titanium’s price has nosedived over the past year. Manufacturers are not conspiring to relieve us all of our money by creating more Titanium yo-yo’s. They are making them because they can.

While the price was 50% higher, as Ben previously said, you just could not make money with Ti unless you charged more than $400.

Because of the nature of commodities, you cannot buy Titanium now and manufacture later. That is both expensive and unduly risky. So, they are cranking out Titanium yo-yo’s while they are able to.

With the recent Yuan devaluation; it is the Chinese manufacturers who should be considering making a Ti yo-yo.

YoyOfficer - Aren’t we about up to “T”? I would think a “budget” Titanium from them would do very well.

Ah I’m not crazy about the look of it myself. The mid-walls, undersized diameter, thin width and funky axle are all a bit offputting to me. 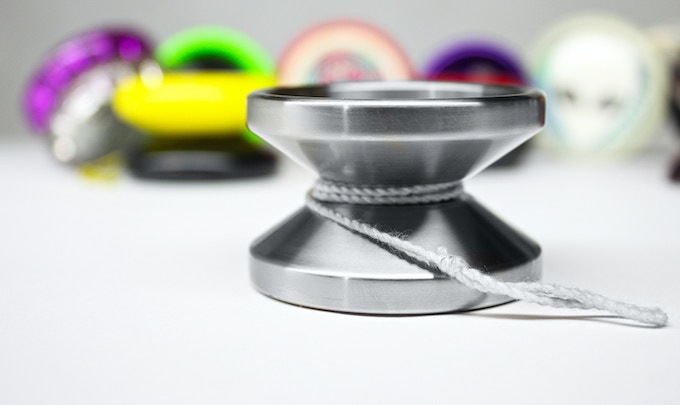 Still, it’s cool to see anyone exploring yoyo design in titanium, and I’m sure there will be people out there that like the look of it.

I’m an AntiYo fanboy. Never had the chance to get a BSP originally, so I’m excited he’s doing another one now!

Other than that one I’d like to have a Citizen and Evora someday. But the TiYo will be mine ;D

I like the idea of a smaller titanium yo-yo, especially since its sub $200. I think the main reason some people disliked the BSP was because it was really heavy. If this is a lighter version it’s probably going to be a fun little yo-yo.

Had to go for the hand brushed TiYo perk. I don’t like the name, so it’s going to be known as the BSP.2 to me, but everything else about it made it an easy decision. And this will likely end my “summer of Titanium” purchases. 7 of them purchased in the last 4 months or so… My wallet needs a nice long vacation.

I think the Ti-yo looks sort of neat. It’s the cheapest Ti throw so far. I don’t think many people liked the way the original Bsp played and when I first saw this on yoyonews I thought it was a new run of Bsp’s with a new finish. After looking up the specs of the og Bsp I realized that the new Ti-yo is about 4mm smaller in diameter and 2.1mm wider, not to mention at least 3grams lighter.

Ti-yo is a nonsensical thing to my eyes.
The BSP had nothing special, its rarity was given by material which was then almost a novelty.
With great possibilities of processing that can give this material, and with the evolution of the game, I think we go to achieve in 2015 a yoyo with a width of 38mm is just a waste of material and time

Ti-yo is a nonsensical thing to my eyes.
The BSP had nothing special, its rarity was given by material which was then almost a novelty.
With great possibilities of processing that can give this material, and with the evolution of the game, I think we go to achieve in 2015 a yoyo with a width of 38mm is just a waste of material and time

I don’t know I really agree with your opinions these days.

This is super true and also the things you’ve said on other posts are also true.?