That would go…in/on the bearing, just like regular lube?

With some yo-yos you can use a shorter axle to get the half spec bearing to fit neatly in between the halves, but I can’t say if that will work for the Phidias. I’ve been interested in that one too for a long time, but have decided to get others instead. Maybe one day.

As someone who loves responsive yoyos and loves slimlines and particularly loves the intersection of the two, I took a long, hard look at the Phidias when it was released but I never pulled the trigger on it because I didn’t think it would work as well as I wanted it to as a responsive. Take what I say with a grain of salt, since I haven’t actually used one.

The things that turned me away were:

If one of these things was different, I would probably own one, or at least have owned one, by now. Combined, it seems like the only options are packing the bearing with grease or trying a bearing blank, both of which seem suboptimal to me. (As a side note, similar concerns have prevented me from acquiring a Black Canon, although the flow groove might be better so I still look for one on the BST.)

None of this is to bash the Phidias. It looks cool and if you want an unresponsive slimline it is probably great.

In contrast, the El Mijo was designed with different criteria in mind.

Unfortunately, I would not expect the D bearing blank for the El Mijo to work well in a C bearing yoyo.

In regard to responsive lube, the aforementioned silicone grease or similar products work fine. Doc Pop likes to use the silicon grease from Traxxas (for RC cars). You can also try an R188 (2)RS bearing. I believe they are usually packed with grease and the rubber seal increases the friction a little too.

This video shows how to apply the silicone grease. Start at 4:20

I do suspect that an El Mijo or RBC or Day Tripper would feel a lot closer to a fixed axle than this one though. But with some grease, this might be a really good semi-responsive.

You could try to find a Luftverk Bearing Blank, but idk if the phidias bearing posts are short enough to fit one.

WOW—that’s a ton of awesome info!

I did some more digging online, and the Luftverk Bearing Blank is indeed what I found a reference to earlier. No mention at all of the fixed axle response in any official, or unofficial capacity from PDX.

It’s not a deal breaker at the end of the day. I wanted it as a nice, slimline unresponsive EDC, the whole fixed axle thing just made it so much more intriguing than others. I’m a big fan of throws that can switch between various response types.

I’ll give the silicone grease a shot, but a Half-SPEC alone just won’t work. The bearing post (?) is too tall, so it doesn’t matter how small an axle I put in there—the stock one is already pretty small. I also didn’t know that the El Mijo was a D bearing. I’m very unfamiliar with those. I did come across an older thread here in the mod section regarding modding a C bearing type yoyo to accept a D size bearing. I could be flipping it around in my memory, though. It might have been making a D accept a C.

As far as the response pads, while it’s not a convenient conversion, and certainly not one I could do on the fly…I’d considered using these extra thick 19mm pads. I think they’re for my DV888 when it’s responsive. They’ve got extra thickness, and protrude into the gap a little. I also considered using flowable silicone, and leaving it protruding into the gap, similar to how the 19mm OD Green pads would.

It is a bit of a bummer if they just decided to not produce the official mod. I wonder what changed. Did it just not work? No demand? Not sell enough of the Phidias? Too complex, maybe?

I agree that thicker pads, particularly ones that extend into the gap, will improve response, but the pads for the El Mijo are wider than typical pads. While it might be possible to modify the response groove of the Phidias to accept wider pads, that’s well beyond what I’m comfortable with trying. In addition to not having the right tools, it is also Al 7075. 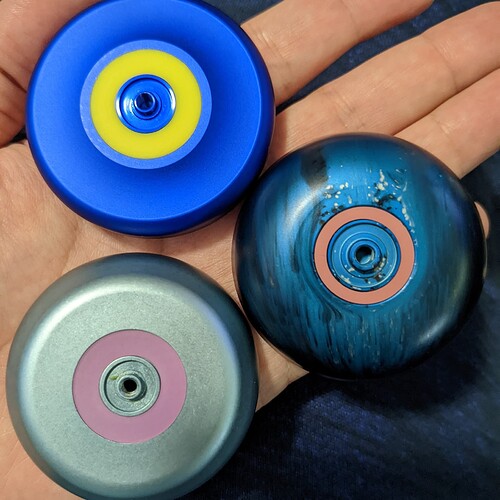 Side note: I haven’t used flowable silicone much and only for recessed installation. How do you get it to extend past the edge of the groove? I would have expected it to try to “settle”.

Surface tension should allow it to very slightly poke out of the gap, but it would be very tricky to apply. I sort of did this with red gasket maker (not clear flowable silicon) in a Basecamp Sherpa. But I think I just made it flush with the gap; I’m loaning it out so I can’t check.

I don’t think I’ve ever put such thought into pads before—wow.

Basically what @safetypin said. It would be able to kind of…round out a bit. I figured I’d try the flowable first since it’s by far easier to work with than my Red Gasket Maker. If I couldn’t get it to maintain the form I wanted, I’d switch to the Red, which I have in 24hr cure and 90min cure for those days I just can’t wait lol.

The 90min stuff can be a pain, though. And messy. It would give the most control over the form and mass—it can almost be sculpted. So I have options in terms of modifying response.

I haven’t gotten around to picking the silicone grease yet. Though I’ve been wondering how difficult it would be to make an actual…fixed axle mod. Along the lines of PDX-yo was probably considering. Something where you just unscrew the throw, change the axle/bearing and good to go. The step that basically juts out of the thing is prime real estate to have something…clip or snap into place over it.

Anyone with a 3D printer wanna be my friend? I have candy!

I have made a fixed axel before by taking a chunk of plastic straw or heat shrink plastic, cutting it to length, then using hair dryer or heat gun to shrink-wrap the plastic around the center of the axel.

It works. It won’t last forever and you might have to re-do it, but it costs nothing, and is quick.

I think depending on the straw, or plastic you use, durability and shrinkage are factors.

But hey, it’s worth a shot and will literally cost you no money right?

I will add a caveat, I used an old axel. This could potentially make your axel unusable if you cover too much and get the plastic on the area where it needs to thread into the yoyo.

Why not try? It might be worth the few dollar risk if were to some how ruin an axel.

I think I may have just invented (at least I haven’t found someone else mention it either) a mod / hack to fulfill your dreams of fixie or bust.

It just so happens that I have an 8 Ball flat bearing that I am not using. However I do not have nail glue. Every other kind of glue…Elmer’s, three types of super glue, wood glue, SFX Makeup/Prosthetic Glue…no…nail…glue.

Acetone breaks down super glue, though doesn’t it? I’m just asking if there was another reason for not using that. Like the forces exerted during a throw would likely break the balls, or something. (Sounds super weird

Perhaps one of my 8 Balls will be sacrificed in the name of Amateur YoYo Science! and I’ll give a couple drops of super glue a shot. I’m sure the bearing lived a good life. It’s wife and kids will understand.

Awesome idea and solution, though! I tip my hat to you, sir!

I believe super glue should be nearly the same as this nail glue stuff and also should be dissolved by acetone or other solvents! It’s an old dirty 8 ball so sacrifice it!

Even if the glue breaks up due to forces exerted on it, we can always add more!

Bearings must tremble when you walk into town

I shall post my results! And any method I employ within the madness itself.

Hell… Toss in some nail polish nice and deep like while you’re at it and make it purty in the inside!

I was actually considering painting it, yeah

Make it easier to tell apart from the others to avoid any mishaps.

I have indeed created a fixed axle… 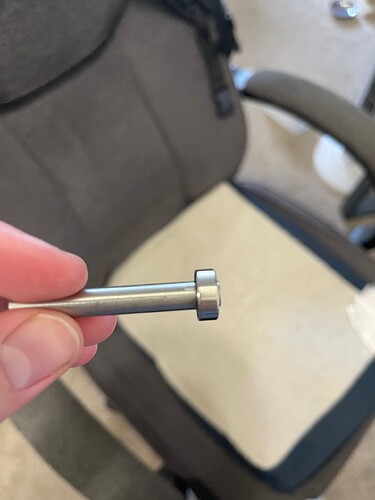 First shot…super glue 1, me 0. I’m dissolving it now. Didn’t realize until it was really set on there. Stay tuned for the epic sequel: The Bite of the Bearing: The Revenge!