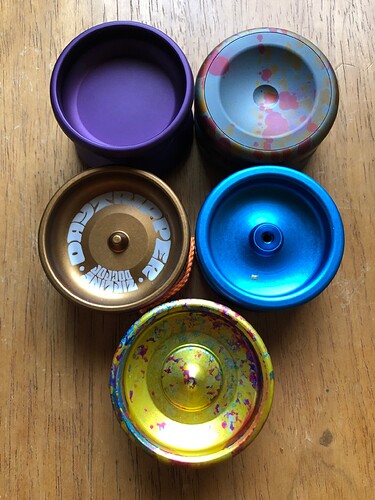 image1920×2560 351 KB
Here is my collection of modern responsives. Respawn Lite, El Mijo, Daytripper, Deep State and Deeper State. Each one of them becomes my favorite as soon as I strap it on my finger. What’s your favorite responsive yoyo?
13 Likes
FireMind January 19, 2022, 1:46am 2

Nice collection!
I have everything except the El Mijo myself. While I enjoy all of them for their own character, its hard for me to not say the Daytripper. Imho it kinda set the new standard for what a modern responsive could be. I typically like straight up wood fixed axle but the Daytripper feels as close to fixed as I’ve seen in a bearing responsive. I also recently picked up a MK1 x Spinworthy RBC and its also amazing , giving the Daytripper a good run for its money. I highly recommend picking one up

My top three are the RBC, Daytripper and Weekender. If I could only keep one it would be the RBC as the way it responds is just unreal. It’s as close to perfection on the response as I believe I will see in my lifetime.

The Weekender and Daytripper are amazing as well. The weekender is perfect for me at home on the weekends, the extra width is nice for a balanced shoot the moon and landing the string easier in string tricks. The Daytripper is perfect for the work week with the pocket friendly profile. I landed a work at home job so I traded the Daytripper since everyday feels like a Weekender day.

I have a Respawn, it has its place. It responds nicely, but the extra weight keeps it from easily doing what the others in the list can. Not knocking it, it’s just better suited for other responsive tricks, so it’s a tool that stays in rotation.

Only other one I have anymore besides the above is the Deep State. Since I traded the Daytripper, it’s my go to pocket throw (since my daughter is pocketing the RBC, lol.)

Had a Deeper State, loved it but it was too unresponsive, I heard later that I should have out in a slim C and shimmed it and it would have blown my mind. Only one I had that didn’t speak to me was an AlleyCat 650b, which sucks, I really wanted that one to work out.

Only one I have my eyes out for now is the elusive Flying V.

I was watching a video of an rbc yesterday. I think that might be a solid addition. 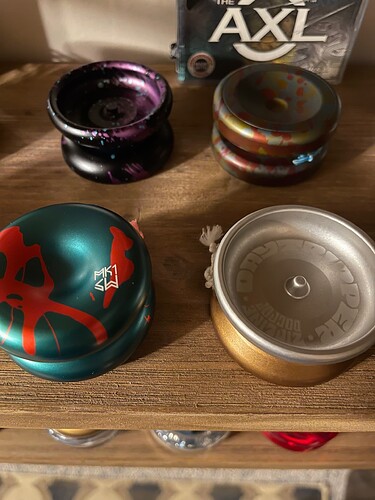 Depends on the day. My woods get more use when I’m playing responsive. The Daytripper gets a lot of time I go back and fourth on the RBC.

Hi. My name is Malachi and I have a modern responsive problem. I hope this support group will be helpful in my recovery. I’ll edit in a bit with names and some opinions. 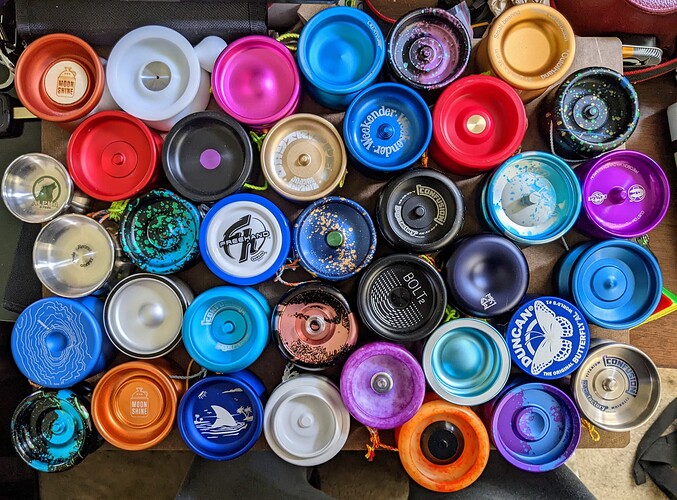 If I don’t specify bearing, it’s probably small (most likely A or D). If you have any questions about any of these, just let me know.

Unpictured, because I did not have them yet:

Unowned (and mostly out of my reach or not of enough interest, just listing for completeness, if there are ones I am missing, let me know)

I really enjoy slim, responsive yoyos (and fixed axle). 0A is my preferred style. I also have a pretty strong preference for small bearings, so while I still enjoy most of the half-spec C, they rarely beat out a good A bearing for me.

As far as favorites… It’s really hard to choose. I’ll try to come back later and add some comments about the highlights.

My normal EDC is that beat, black YYF Confusion in the middle. Good enough to play, but cheap enough not to worry too much about (and I have 2 spares). (I lost my original 650b, so I’m a little paranoid.) I really like it and that’s what compelled me to get the Ti version.

I have a soft spot for the Alley Cat 650b, it was a really nice refinement of the OG Alley Cat, which was kind of at the tip of this iceberg for me (as was the Sherpa) when I started throwing again in 2016(?).

The Daytripper and the RBC are among my favorites. I like the Weekender a lot, too, but its width make it less pocketable… but regens just feel so good.

I also have a lot of fondness for the Gamer family, particularly now that it has been refined. I hope someday there is an official small bearing version. I liked that it aimed to be more affordable and I find the evolution of the Space Invaders colorway to be fascinating. (The small bearing on the lower left is the Plasma Rifle colorway, but you get what you get when it’s a proto.) 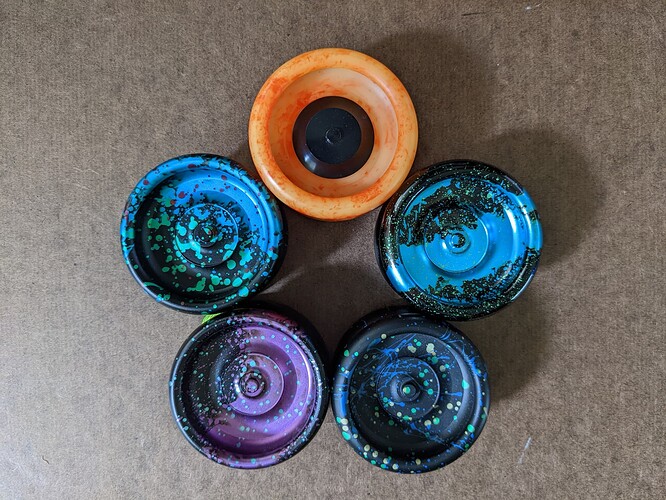 I really like the flexibility and customizability of the El Mijo, although the RBC overshadows it a bit in a similar space. I like the lighter weight of the RBC, but they’re both (along with the Respawn Lite) very recent additions, so they need more time to percolate.

A reasonable person would probably pare down this to something more manageable, and someday I may do that. Probably with an eye for dropping some of the C sized bearing models where I feel like they are outmatched by a small bearing yo yo to trim the fat a bit. My SO would like for companies to stop making new responsive yoyos, cause I’m obviously a sucker.

Wow!! You do seem to have an issue. I hate that I didn’t include my Butterfly AL. Certainly qualifies. Looking forward to your opinions.

As a side note, the Whimsy Lessur really is crazy heavy. Don’t try this at home.

I just got my Daytripper a couple of weeks ago but it sees the most play time. I can’t recommend the El Mijo enough. It was my favorite before the Daytripper showed up. Now it depends on which one I’m throwing.

I thought I was going to trump you with my Deep State prototype that weighs 68g. I looked up the Lessur and it says 92g. I’m not sure you should fire that thing up inside the city limits. What a beautiful piece though.

So I recently grabbed a Gamer on a whim when I saw it back in stock because like you im a sucker for slim responsive lol
My problem is since I’ve had it it’s been ridiculously overly responsive it snags even just trying a basic trapeze. Any advice on what might be going on? Are the response pads just super aggresive on new Gamers and need time to break in?

I was blown away when I got it. As long as you remember you’re playing with a brick it’s kind of fun.

Not sure if this is has been answered.

What is the difference between modern responsive vs Turbo Bumble Bee/Freehand 2?

My problem is since I’ve had it it’s been ridiculously overly responsive it snags even just trying a basic trapeze. Any advice on what might be going on? Are the response pads just super aggresive on new Gamers and need time to break in?

What string are you using? I don’t find mine to be overly responsive, but the pads do stick out just a little. However, I also use fairly thin string, thinner than Kitty regular, which gives me a little more room, I think.

What is the difference between modern responsive vs Turbo Bumble Bee/Freehand 2?

In my opinion? Not a lot.

“Modern responsive” is a term that is used to push back against the hegemony of unresponsive play being “better” or “more advanced” than responsive. It also refers to the yoyos that have been designed with modern sensibilities (mostly metal, “standard” bearing sizes, “standard” pads [sometimes], QC, fit and finish, etc). The Turbo Bumble Bee (I still have one) and the Freehand 2 are capable of the same style, but as a grouping of yo yos, I usually exclude them since they are no longer in recent production, as far as I know, and they have some drawbacks (“cork” brake pads?).

My inclusion of the Lessur in my photos is not 100% serious. The Axl Elite is also borderline, but my understanding is that Custom Products still makes them, despite not being up to what I would consider “modern” standards for response system.

I would love to hear other takes on what “modern responsive” means, but I’m also happy to let it be vague and subjective.

You summed it up just right. I remember Doc Pop made a comment that one aspect of modern responsive he finds fascinating is we could have done any of these new tricks years ago some of these elements just never occurred to players back then. Just goes to show how much unexplored territory can still exist even if what might be thought of as a “figured out” style like responsive. I also find it interesting how a lot of the aspects that yoyo manufacturers were trying to avoid for years (more snappy, lighter weight, higher walls etc) , are intentionally the elements that makers of high end responsive throws are going for. It kinda makes modern responsive this fun neo-retro type style taking a bit of nostalgia and forging it through a somewhat modern lens

I “strongly dislike the gamer” I’m wondering how your running yours. What bearing, stock pads?

Stock pads. The Delrin and the Light have the half-spec that came with them, the 2nd run has a full ceramic half-spec. Thin string. A little it of thick lube. But everyone has different preferences. The Gamer is on the heavy side for responsive which can be a little awkward, scary, or uncomfortable. There is certainly enough variety out there that you can find something that suits you better.