Stuck between the two, and seen great thing about them both. If you had to recommend one which would it be?

Grasshopper GTX is rounder and more comfortable. Peregrine is wider, sharper and faster. If you are not competing I play with the Grasshopper more often. The price difference is big and don’t forget that Duncan will have their big sale for the year on June 6th. Last year the Grasshopper GTX was 50% off.

The Peregrine plays faster. Quicker to move and change direction. Depends on what you’re looking for.

I owned both of them. I still have the Grasshopper, I sold the Peregrine.
Hard to explain but the Peregrine just felt boring. Never once did it feel exciting or interesting when I was using it. It wasn’t bad to me, it was just a little lifeless.
I realize I probably sound bananas trying to explain this

The Grasshopper put a smile on my face after the first throw. It’s a beast and a much better value in my opinion.

Thanks everyone, I’m going with the GTX

I don’t see why they would have the same problem since they have had the new order system for a whole year now. I got my order in the end and I wasn’t charged so I think the people who tried to make changes early in the process had the most problems. 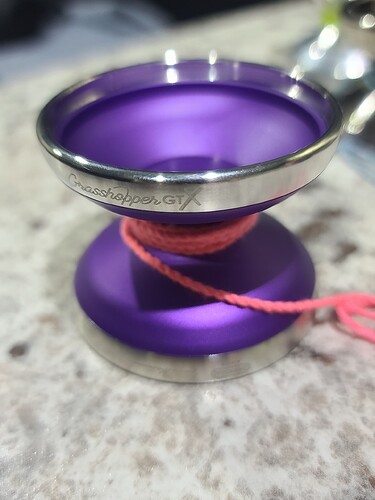 What do you mean?

Got the same with gold rims. Calling it my Mace Windu yo-yo ( his lightsaber was purple and gold)