I’ve been meaning to write a small review for this yoyo for a while now; The guys over at Square Wheels ran a promotion/giveaway a few weeks back, and I was lucky enough to win this Rockefeller. I finally decided to sit down tonight and write something up, so without further ado: 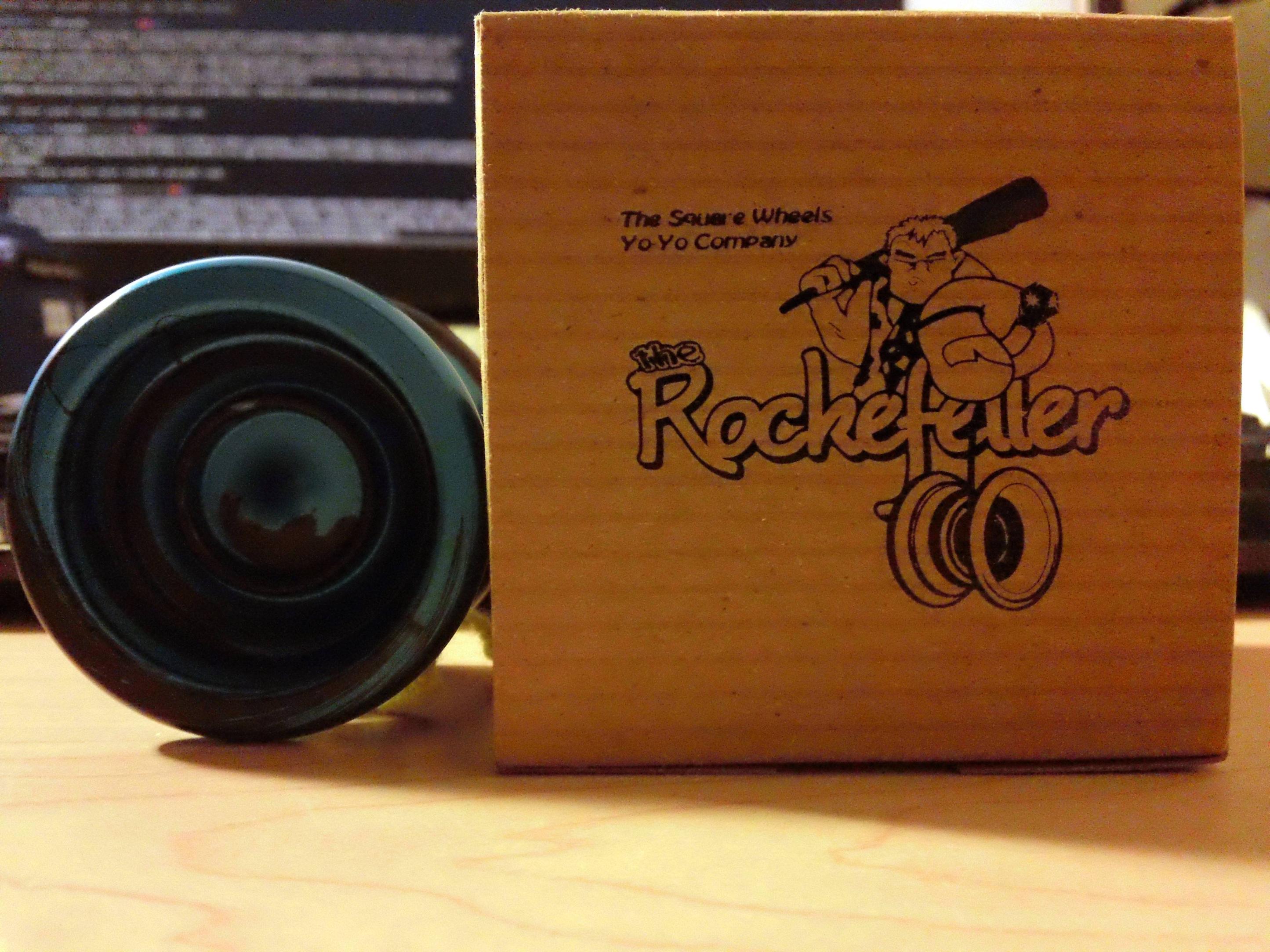 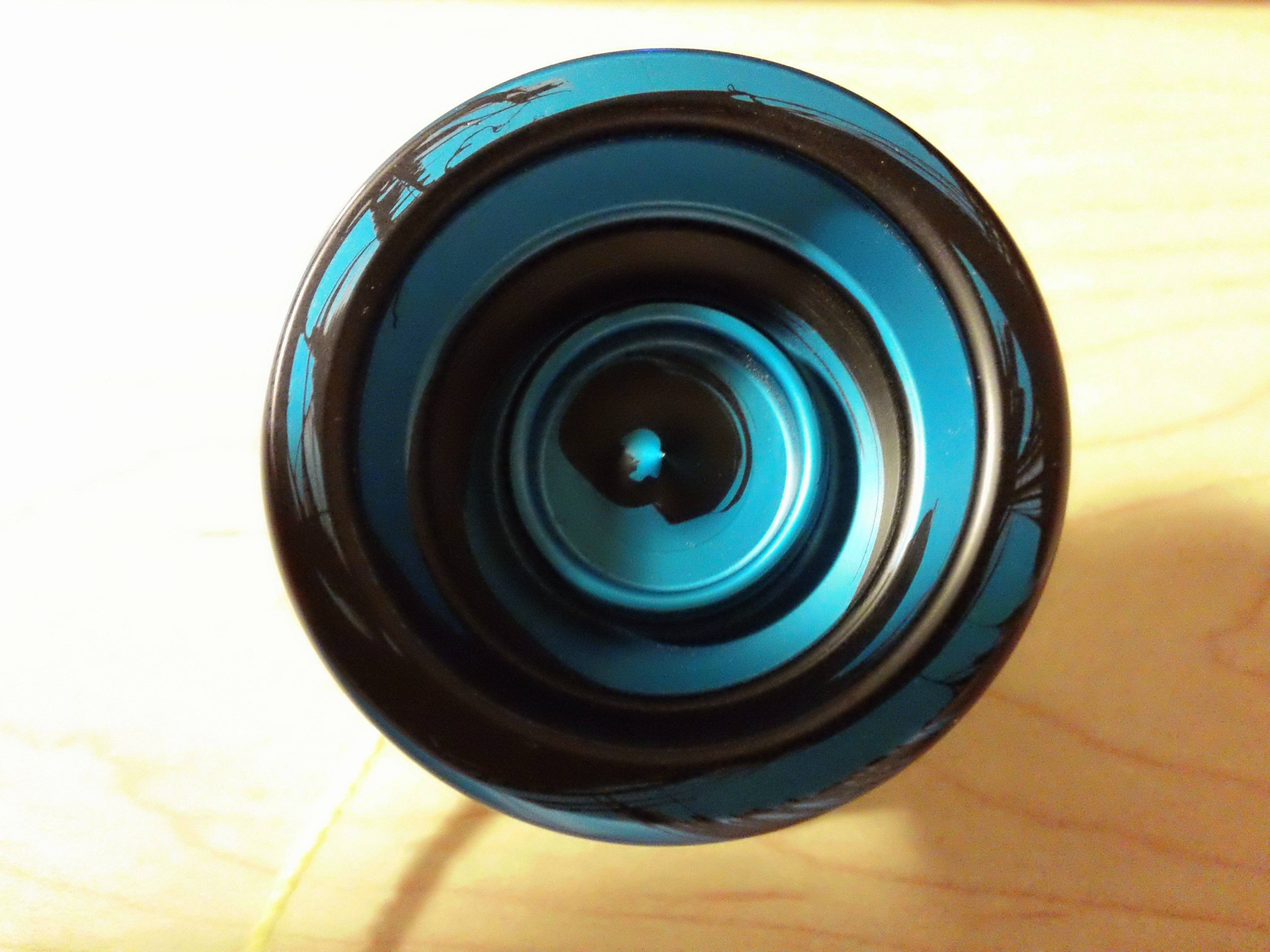 The Rockefeller was shipped to me unassembled in a small flat rate priority USPS box. Each half was fitted in a cut foam insert that was placed in the box, with the axle and bearing in a separate bag. It was fun to unbox- there’s something cool about putting it it together for the first time. Included was a black carrying pouch, a string, and the Rockefeller box. I’m a fan of the Square Wheels box, the embossed logo looks really great!

The ano job is superb - This is the “Gulf Coast” colorway, a blue/black swirl that looks even more amazing in person. Its finish is very nice, giving a soft feel in the hand.

The Rockefeller has an aggressive V shape; the catch zone is very open, with the V shape ending at a set of rounded rims. (Stray observation: even though this is a full-sized 55mm throw, the V shape makes it feel a lot smaller in the hand.) In the cup you are greeted with a fairly sharp center spike, a pronounced inner ring, and a ridge halfway in the cup. An IGR is also present. 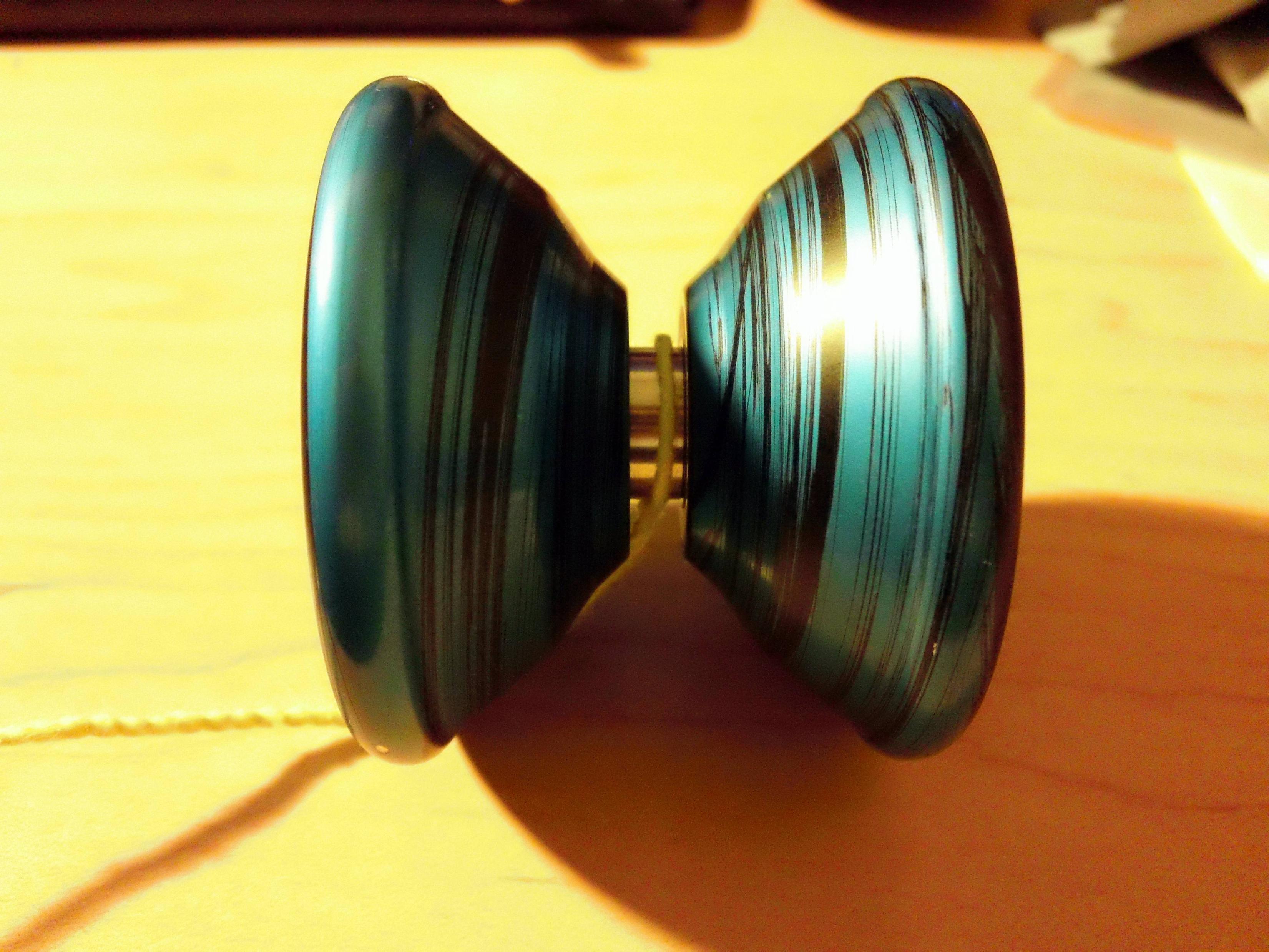 This is a fairly quick yoyo. On the string, the Rockefeller is stable, and can easily be pushed to a quick pace. Although it can be played fast, it doesn’t make me feel as though I have to “catch up” to it (I’m looking at you, Phenom), so playing at a more relaxed pace is more than possible. It has a nice presence on the string- not too heavy or light feeling, but you know it’s there. It also has a small amount of float to it. The catch zone is huge, which makes hitting tricks a breeze, and the generous gap allows for multiple string wraps/layers. I don’t grind much during my throw sessions, but grinding with the Rockefeller is easy - the catch zone is great for finger grinds, and the IGR is well-defined and easy to hit. The Rockefeller also gets extra points for the spikes, which are sharp enough to pull-start and grab during play for matador-style tricks. In terms of horizontal play, the shape of the Rockefeller is well-suited for it, and I had no trouble doing the whopping 3 horizontal combos/tricks I know.

The response is their new pad response, which I found to be very similar to the white Snow Tires/C3 response, only slightly less gummy and a little more snappy, which I liked. The stock bearing that shipped with it was the OD 10 ball, which needs no explanation. I ended up switching it out for a Terrapin X bearing, as I’ve been using the Terrapin bearings in more of my throws lately. 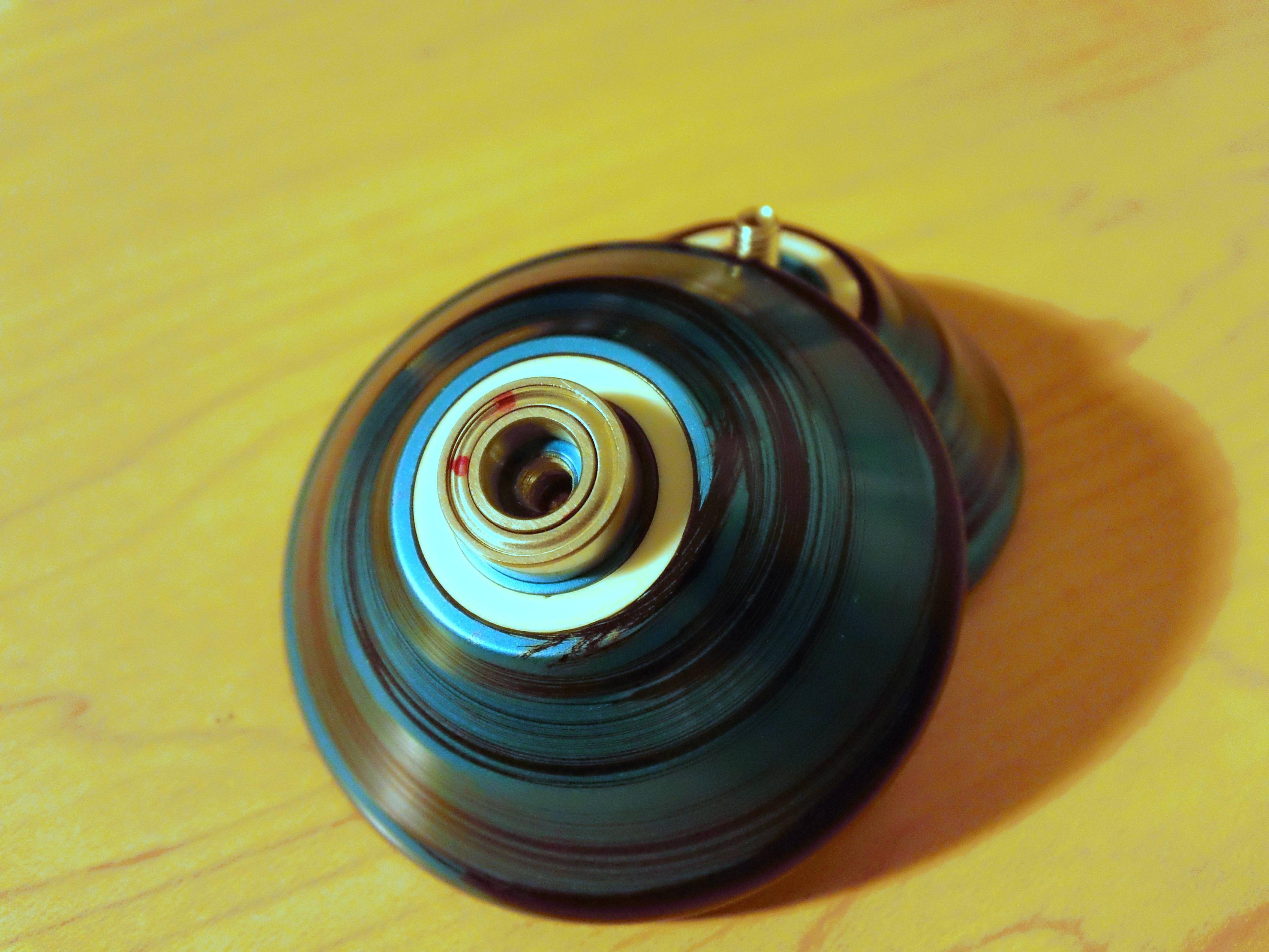 Great, solid yoyo from the guys at Square Wheels. It plays just as awesome as it looks. I definitely recommend picking one up when they officially release. 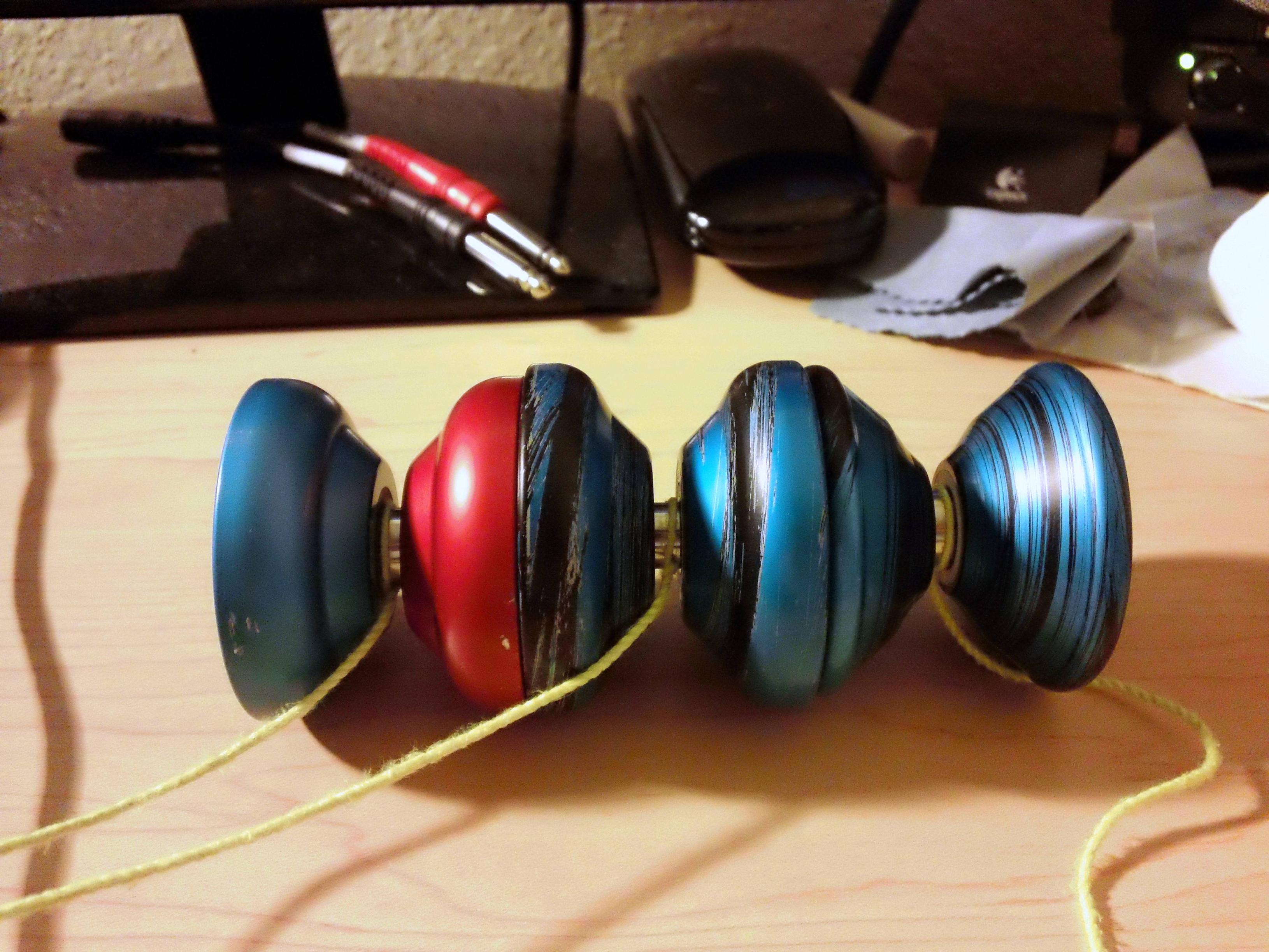 Video of me using it the weekend I got it:
http://www.youtube.com/watch?v=TijNxZ9_JAU

If you have any questions, feel free to ask! This is the first I’ve written a review for a yoyo, so if there’s anything I forgot to mention, feel free to point it out to me.

Great review! I wanted one before, and now I want one even more…

I ended up switching it out for a Terrapin X bearing, as I’ve been using the Terrapin bearings in more of my throws lately.

Nice review! Square wheels has been putting out great yoyos! I love terrapin x bearings too, except that I left a cotton string on one and it rusted a little. I forgot to take it off.

Thanks for putting in work for the review, Stephen! We really appreciate your support and are happy you like our products!

Thanks for putting in work for the review, Stephen! We really appreciate your support and are happy you like our products!

Bump- The Rockefeller is officially available here at YYE!

Bump- The Rockefeller is officially available here at YYE!

Yes! I definitely want to endorse this review. I’ve been playing my Rock for 3 days now and it’s quite an addictive throw. The spikes in the center feel odd at first when grinding, but you get used to it and they become a fun bonus to mess with. Great review.