The physics behind spin times, speediness, and float

Thank you very much for scanning all of them into a PDF.

I reached out to @kyo to see if he would have any issues with these documents being uploaded to the Interent Archives and he said go for it! You can find them in all their glory here! 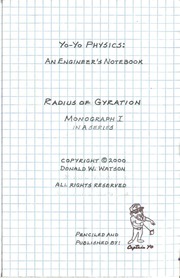 I’m pretty sure that perception has a great deal to do with more subjective adjectives like “float”. I don’t mean that it’s completely subjective, or that there isn’t an objective way to measure float.

As a parallel example of perception (this is not about floatiness), I had a G2 Respawn Lite that felt heavier than El Mijo. Technically, El Mijo is 5g heavier (58g vs 53g, but my brain just couldn’t get around how much it expected each yo-yo to weigh. The smaller, much more compact size of the Respawn Lite just really threw my brain off.

I think this effect is lessened in unresponsive yo-yos, but I have a feeling a similar thing is happening when people talk about a yo-yo feeling floaty. Being still fairly new to yo-yos (~4 years), I honestly don’t get this. I’m sure part of the reason is I just haven’t had a chance to play with enough different yo-yos; maybe after I’ve tried a bunch more yo-yos I can get a better handle on float. I also don’t get what it means to be fast.

I would think that technical/speed combos are more difficult with organic shaped yo-yos because those sorts of trick often involves a lot of string wraps and intricate string configuration, during which it becomes increasingly difficult to keep all the string segments away from the sides of the yo-yo, creating friction, which results in slower spin and procession.

I heard about this a little while ago; I think @DocPop was talking about them.

This documentation is Amazing! Thank you for sharing this, and those that are going to maintain it for future generations.

I can’t imagine the amount of time this took for Mr. Watson to put together. Hand Written and Drawn!!! That penmanship!!!

I think it is a testament to the way things used to be.

While I don’t understand it yet, I will be nerding out over this for a while.

“Find fun stuff to do already-” D. Watson Apparently he really enjoyed this!

Please remember Mr. Watson was in his late 70’s when he put these together!

I’m pretty sure that perception has a great deal to do with more subjective adjectives like “float”. I don’t mean that it’s completely subjective, or that there isn’t an objective way to measure float.

I’ll take it a step further and say float is -entirely- subjective and that nobody can even agree on what it means. We’ve been trying to quantify it for decades but it’s a moving target based on personal preference.

To be super general though… Light yoyos tend to feel ‘faster’ even with rim weight. Having done surveys of players though, there is no consensus.

Here is a link to a scan of Professor Wolfgang Burger’s Article that Mr. Watson referenced.

For anyone else nerding out.

I shared a post about Don “Captain Yo” Watson and his engineer’s notebooks on my blog if anyone wants to read it. Don Watson's "Yo-Yo Physics" Zines - Doc Pop's Blog

I’m curious, does anyone know how Don is doing these days? I think about him often, but don’t have any contact info for him.

Float seems like a pretty subjective term overall to me. It seems to vary in definition depending on who you talk to.

The way I understand it, MOI has minimal impact on how the yoyo actually moves, because the yoyo’s MOI with respect to your finger changes very minimally (as you and Mark have shown). MOI more so plays into how stable the yoyo is.

I think float the way I understand it is more a result of other factors such as the weight, the pads, the bearing & axle, and the actual rotation speed of the yoyo (which I think does have to do with MOI). Then again, this is just speculation.

I last spoke with him in 2018 and he seemed to be doing ok at the time, minus the standard health issues of being old. He would be 98 now I believe.