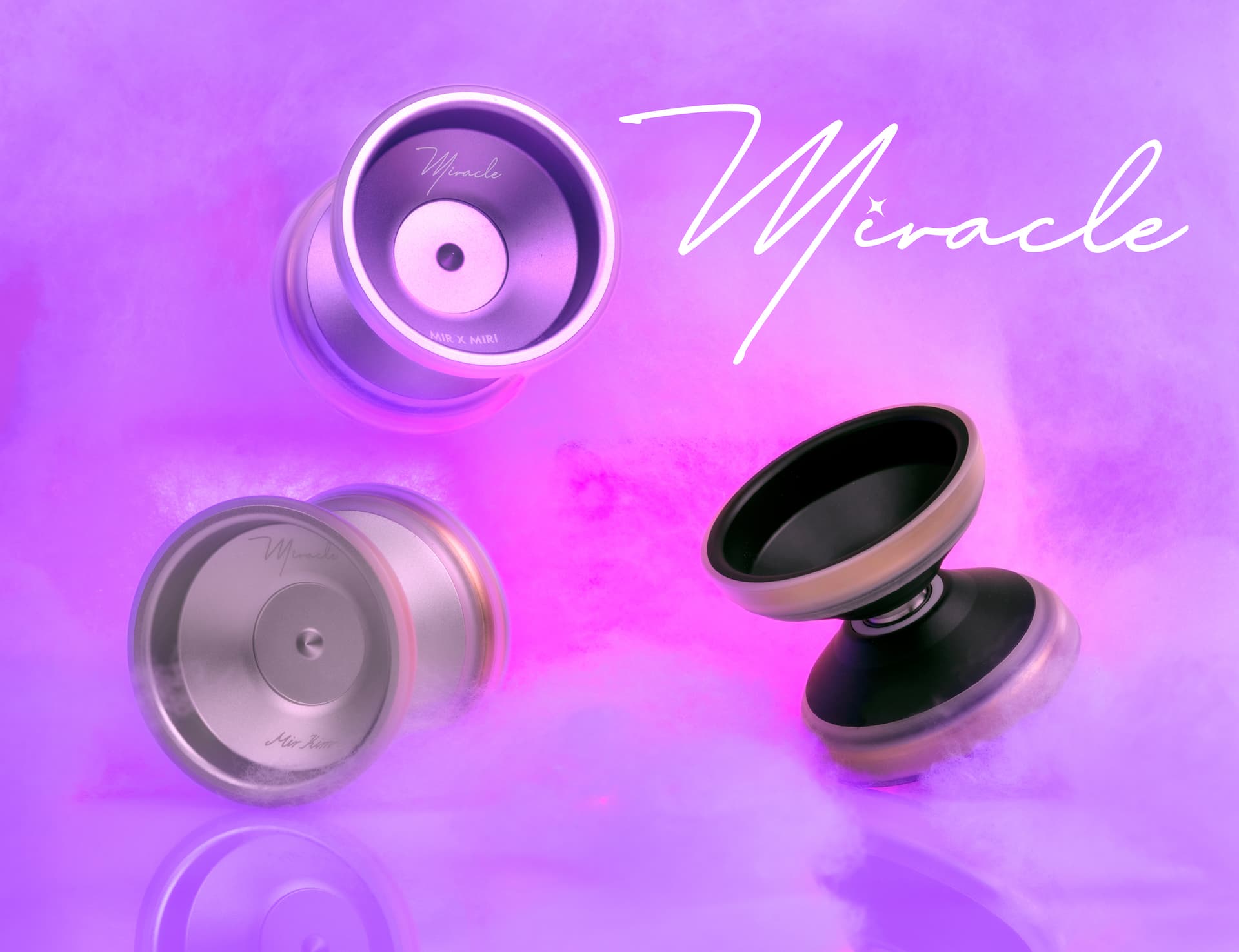 Mir and Miri Kim are a brother and sister duo that is taking the yo-yo world by storm. They have dominated the Online Wold Yo-Yo Contest for the last 2 years and they are just getting started. Some might say it is a miracle that they won both the 1A and Women’s title two years in a row but with the right skills and tools, like the Miracle they have shown anything is possible. 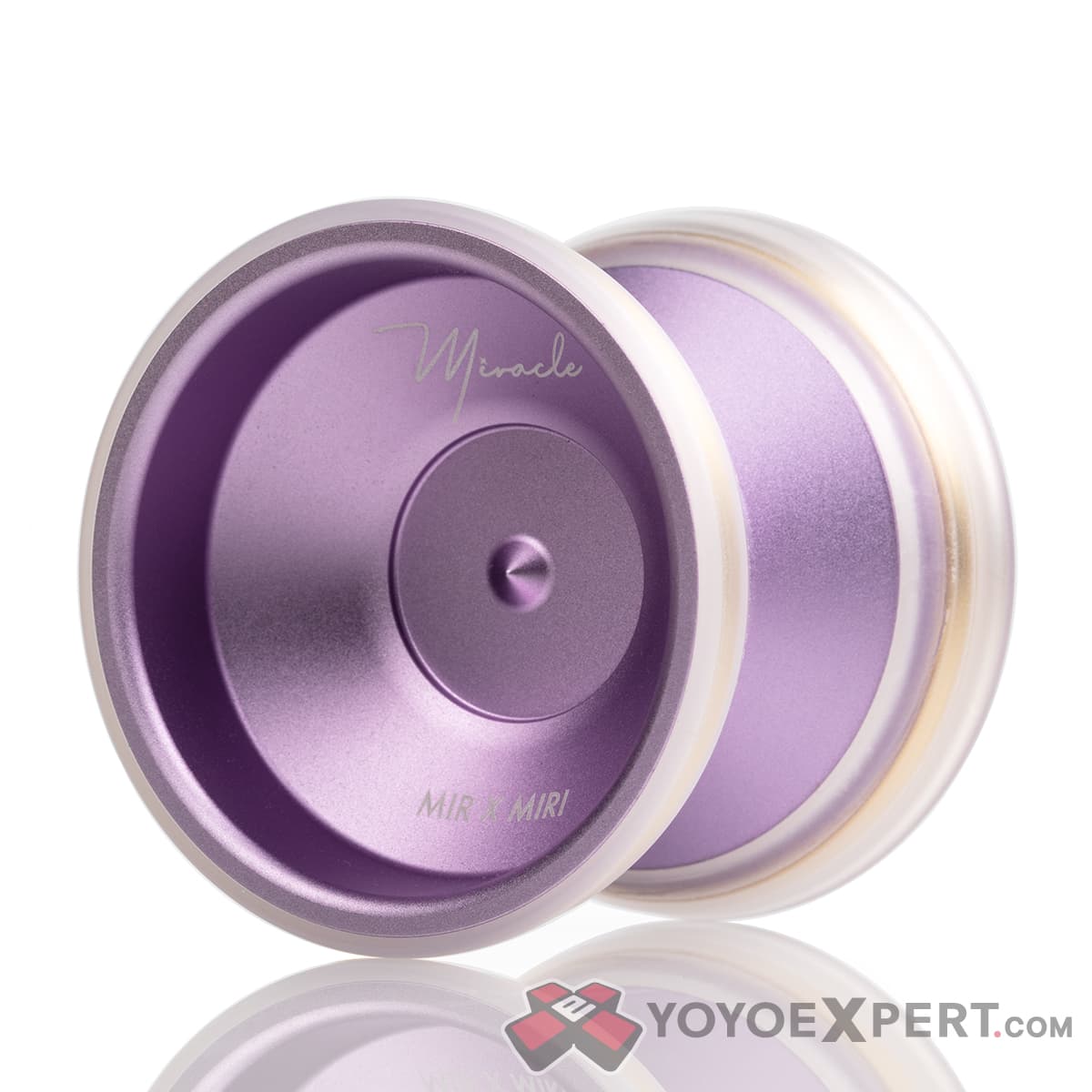 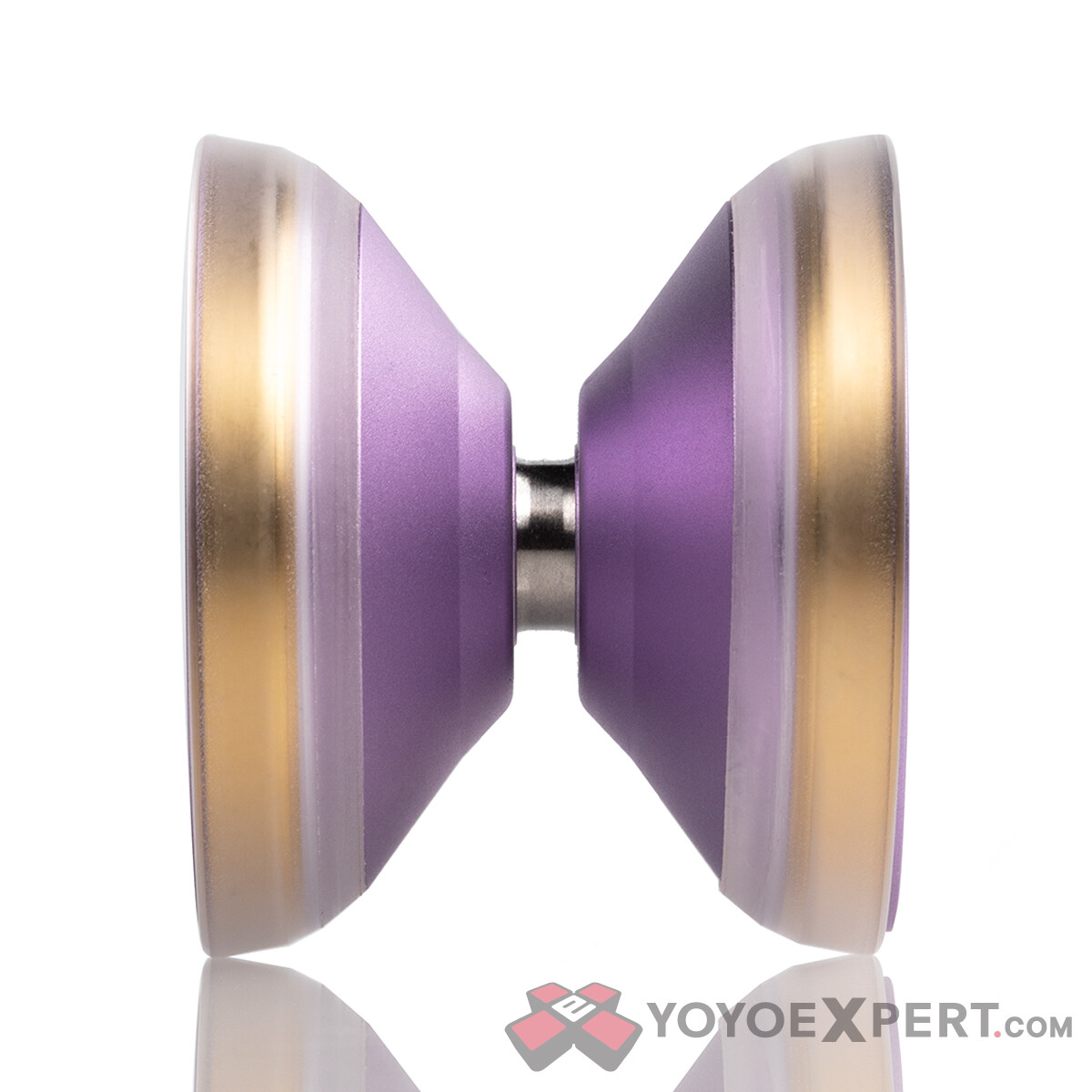 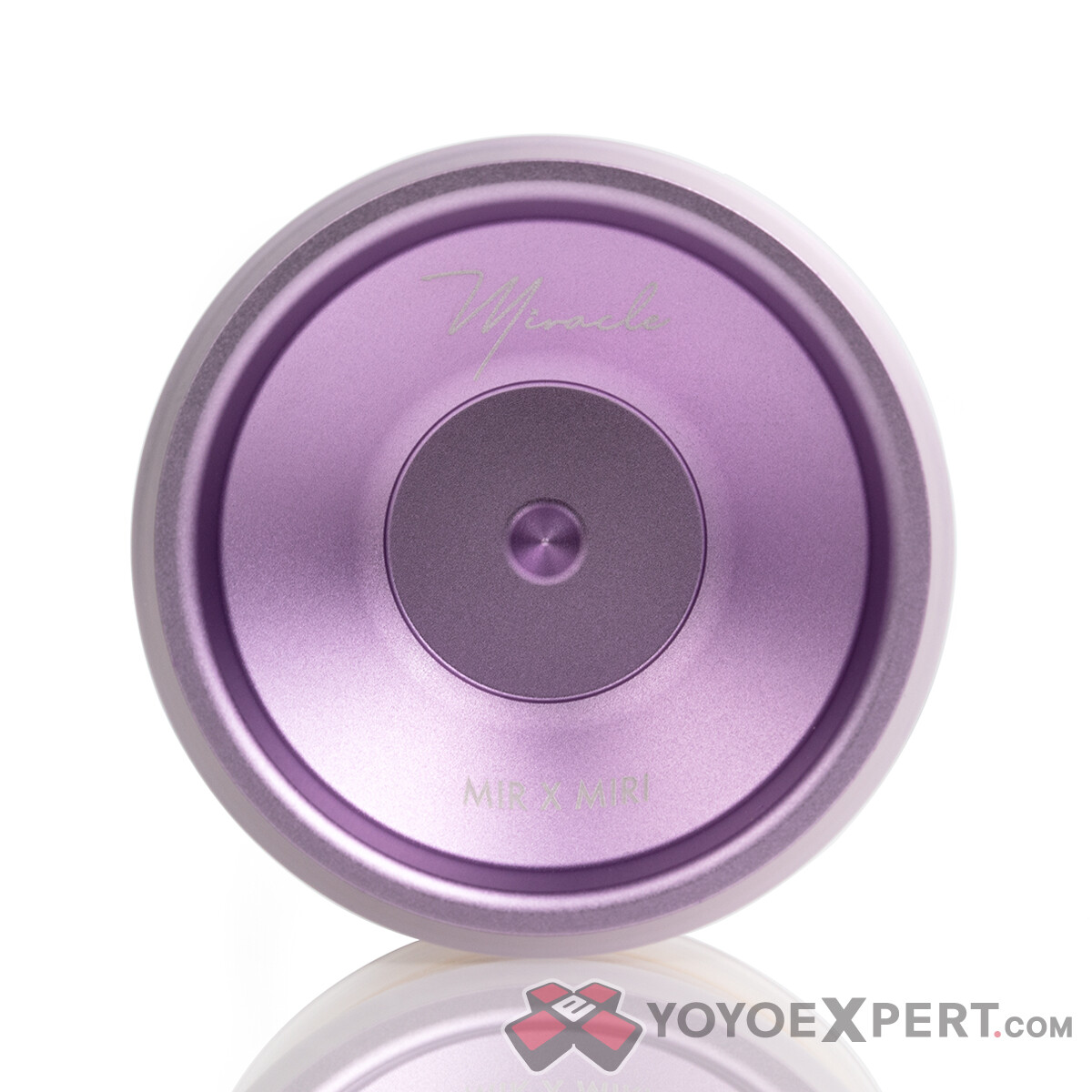 The Miracle uses a very unique design that combines 7075 Aluminum, Brass and Polycarbonate. The extreme rim weight of Brass provides a great spin time. While the polycarbonate cover adds some size and durability to the yo-yo. 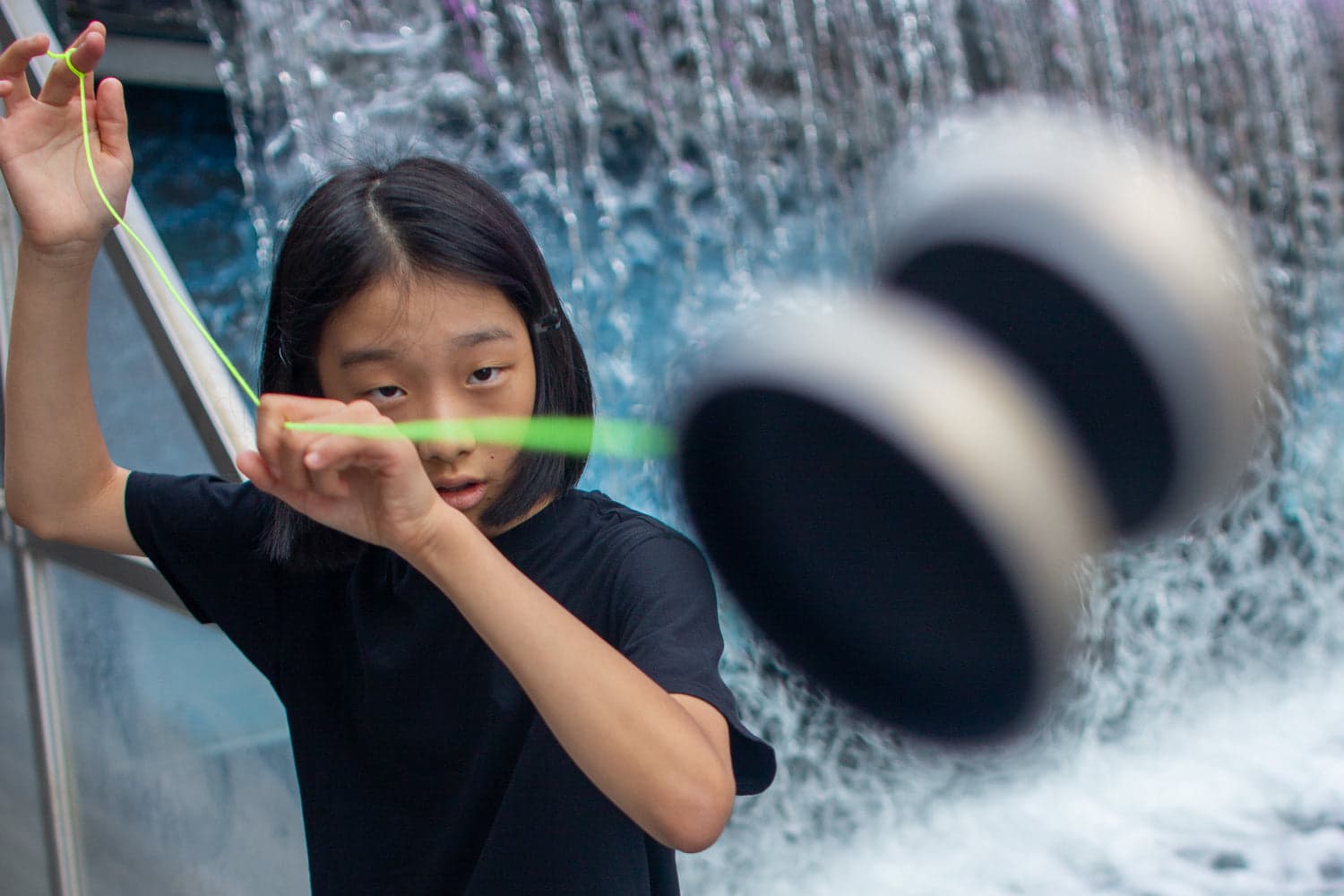 This beautiful design is more than just looks. Mir and Miri Kim have shown just what this yo-yo can do with their victories, what will you be able to do with a Miracle on your side? 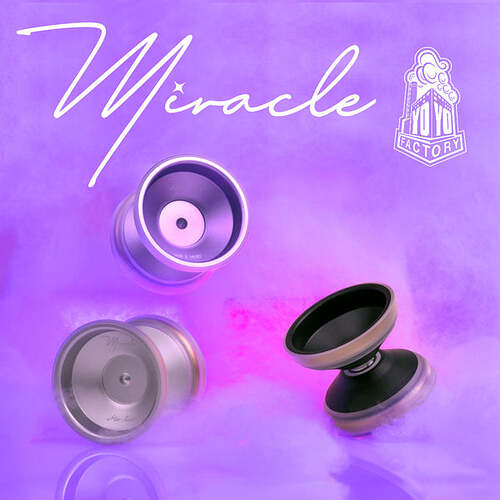 The Miracle may seem unbelievable but its real and ready to help you be victorious. YoYoFactory worked with Mir and Miri Kim to help them design a yo-yo that they showed can conquer anything.Mir and Miri Kim are a brother and sister duo that is...

I got a feeling that the sister could go right up on stage head to head with the guys. I seen a lot of female yo-yo players over the years. Obviously, they run the spectrum of skills just like any group. But this girl has an aggressive style, and a power Curve that I normally don’t associate when I see female players no matter how good they are. I have no idea how old she is but she looks pretty young to me and she’s already scary good. I love her style it’s really dynamic in everything she does. She doesn’t seem at all surprised when she hits her bangers……simply amazing.

And that yo-yo… Some serious thought went into that design. I’ll take two.

Agree with you on everything. I actually enjoy watching her play over her brother, she just has that something special. And the throw may be my favorite for this years releases, truly enjoyable to throw

The polycarb rim is dislodged in the product photos. I’m assuming it’s a factory mistake but I’m kinda afraid it won’t be so structurally sound

They both have amazing skills.

And not discrediting the brother, but the sisters style is unlike anything I have seen. I hope they both stick with it.

Damn I was lowkey interested in this based on how unique it seemed until I saw that (ano flaw) and this:

The polycarb rim is dislodged in the product photos

Guess the “Miracle” is how these somehow passed QC… and for $160?

@yyfben2 mentioned earlier that the tool that came with the shutter EVO also works for the YYF miracle for the poly rims. It relocates the rims back to normal position. And he also said that he hasn’t had another issue with the rims dislodging after he used the tool to fix it.

Hopefully Ben can give us more info about it. I’m on the fence for picking up this throw

I don’t think I can hold off any longer

Yeah but arguably a yoyo in this price range shouldn’t require a fixing tool in the first place. A rim that dislodged even before dinging it will most likely dislodge again rather easily once they’re dinged again.

It also doesn’t help that the rims seem to be pressed from the inside out, which is even weaker than outer rimmed yoyos. Combine that with the fact that it’s a plastic rim, it’s most likely going to dislodge again on a decently hard impact.

I have the Miracle and it doesn’t have any gap. The gap in the photo appears to be less than the thickness of a piece of paper. Also if I look at the Gtr-js photo on yoyoexpert there is a noticeable gap. I’ve slammed it into the floor and didn’t faze it, where doing so with the Evo popped the rim loose. For me it’s my favorite so far this year, not counting One Drop monos.

This used to be one of the product photos and is what others are talking about; the right rim looks pretty clearly shifted in the pic: 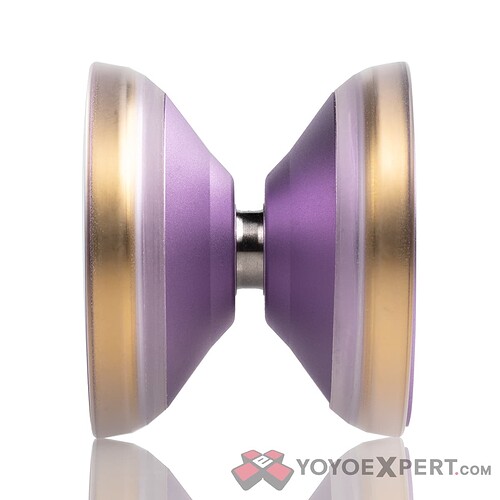 But! YYE being awesome as they are have said each one will be inspected and tested before going out.

I got to try it at Spindox in October and it was a very nice playing yo-yo and iirc its owner (I think it was @Alex_Hattori ’s) said it seemed pretty durable.

I agree with you on the lower part, it definitely looks shifted. But the gap on the inside with plastic appears to be less than what I see with Gtr-js as well as many other bi-metals. That throw in the photo definitely needs to be removed

If you have spent any time with bimetal yo-yos you know how dis-similar materials behave. QC is don’t prior to transit and … ■■■■ happens. This yo-yo will be perfect with a click of the rims. If that’s enough to dissuade you…. You probably weren’t that interested to begin with.

Multiple pieces can and do move. There are upsides to the downsides…. You won’t get lil scratches in the anodize and yes, we can even replace a rim if you go ham at a wall.

Wanna show me the anno flaw?

So there I was… It was Wednesday and I knew I would be off for the next four days. Had a list of things to do. 10 things matter of fact. I figured in four days I could get most of them done.

So on Thursday it was all Thanksgiving stuff. All family stuff or food stuff. Just getting stuffed. 10 things to do 10 things left to do.

Big plans for Friday. Shift gears, dig in and tear some tasks up. My significant other had alternative ideas… Yes dear no problem you know me I can make up time. I’m a bad man. No doubt I’ll get her done.

OK, another day down the drain. 10 things to do, 10 things left to do. Great progress so far.

Friday night… Reformulate plan… Got to make something happen… Wishing for a miracle… Mo seldom wishes for miracles. I believe miracles do occur. But not when I’m watching for them and not when I’m hearing about them and not to me. Like the girl in Spider-Man said plan on being disappointed and you’ll never be surprised… Or something to that effect?

Woke up early on Saturday. Plans reformulated. Getting ready to rock ‘n’ roll. If I got anything done, it would be an accomplishment over what I had already not gotten done which was pretty much nothing. Ate breakfast boring…… choosing which cape to wear… Dull. Deciding which magnetic propulsion hovercraft to launch from the Batcave.

Two of my cats beat me to the front door. Somebody’s coming up to 15 steps to my front porch. As I open the door, I’m glancing down at such an angle I feel like a prison guard looking from a tower down in the main yard. No prisoners there though just a FedEx truck. And some young kid running up my steps, obviously at the wrong house. He smiles and says hi Mo. I hadn’t recognized him with his Covid gear on and a baseball cap but it was a guy. The guy that occasionally makes my day.

I thought to myself wow it’s almost like a miracle. I took the box went back into the house and opened it immediately. I needed to recharge my positive endorphins by creating some form of enthusiasm. That may result when you open something that you weren’t even expecting on that particular day. Some thing that was supposed to arrive on Tuesday before eight. But got there on Saturday morning.

And sure enough, the miracle did occur. As a matter fact, two miracles appeared. One after the other as a remove them from the box. New yo-yo day new yo-yo day, did I say new yoyo day?

I got a Lotta yo-yos. As you already know, none of my yo-yos come with tricks included. But these yo-yos are so darn good I just may have to force myself to learn a couple new tricks. I can certainly see how Mir and Miri can light some small fires as they throw these things hard and fast enough to generate sparks. I am not at the skill level to tell you everything these yo-yos can do. But I’ll tell you this they are really really good. My smile is actually hurting my face.

And on another note. Kind of late and running out of time. You still have about a half an hour to buy one of these miracles from YoYoExpert for 20% off. Heck of a deal that’s my two cents.

The hour glass is running out of sand. But it’s not 9 o’clock Pacific time/midnight Eastern, yet. So if you were thinking of getting one. Heck, you might as well get one at 20% off you think? 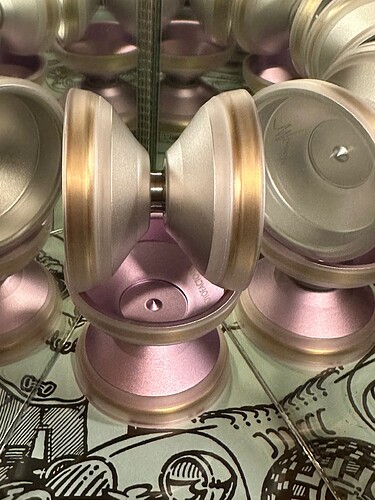 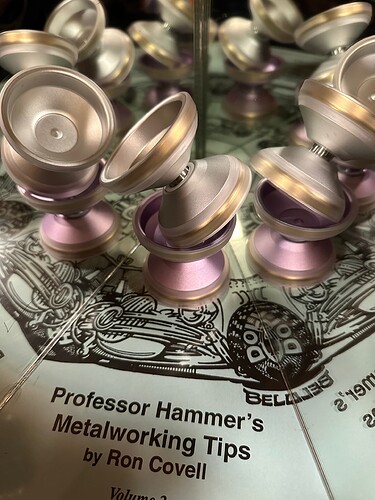 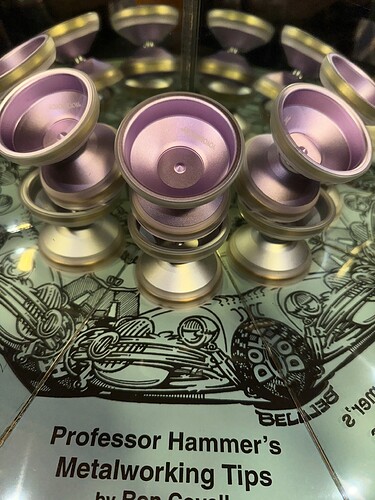 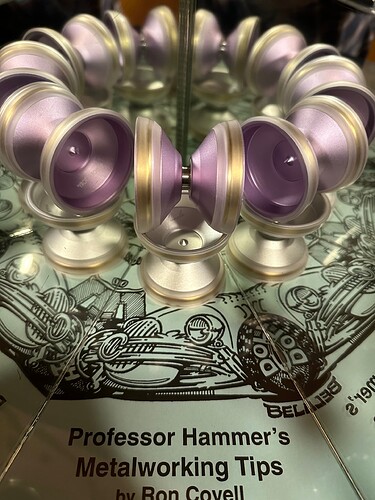