I been working on this for like a week and a half now and have asked another question before. Hope this isn’t annoying. I’m using a shooting star and I’m throwing it front style like a frisbee. I finally got the finger spin part down to the point I can get in the dimple. I usually get it to spin on my finger 5-10 seconds. I been starting the helix from getting the string on my non throw hand and then lacing it in. The issue I’m having is when I start the helix it will start and then it seems to bunch up and die. Is my spin too slow? I use the back of my knuckle to get it to land in the dimple sometimes and I’m wondering if that is slowing it down too much but I’m not sure because I feel like I had some faster spins do the same thing. Any advice/tips would be much appreciated. Thanks!

How’s your string tension? Not quite sure what you mean by “bunching up” but to me that sounds like really tight/bad string tension. Can’t really do a successful DNA without great string tension so def check that.

I didn’t describe it well. I try to keep an eye on string tension since it’ll make it a mess pretty quickly. I also have messed around with different strings. Its like it’ll start to helix and then it almost seems like it’s getting caught at the bottom. The string that helixed will be wound and then all the stuff that didn’t helix just like at the bottom everywhere. I’ll try to post a picture next time it happens. It almost feels like something is like choking it which makes me wonder if it’s just my speed but I’m not sure how much spin it takes for DNA to work.

Just did a few to try to describe it better. It starts to helix but then it gets like caught at the bottom and all the string that didn’t get wound will whip around at the bottom, which actually looks kinda cool, but then it stops the spin within a second of doing that.

Since I just typed all that I actually did just get it a couple times. Maybe it is string tension? I been having this issue for days now. I been checking string tension alot but maybe it is just “spaghetting” up during the helix. 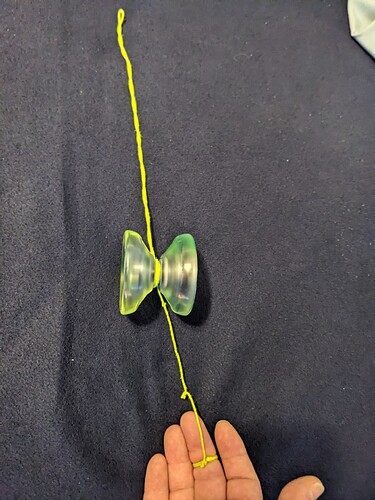 It just happened again. He’s what it looks like once it’s dead. The two sides whip around.

Not sure what’s happening but It looks like you whip too much of the string into the yoyo and it catches on the response system.

When you do the whip try to reduce the amount of string you throw into the gap of the yoyo. You should have slightly less string catch onto the response system than what would be used on a normal finger spin.

Here is a tutorial for the DNA

That is it! I finally figured it out. I’m not whipping it I’m doing it the way where like lace it in. I just realized all these times I been putting the string in to far touching the response pads instead of just lightly starting it along the lip of the yoyo. Thanks so much. I’m going to try to learn the whip method next looks alot cooler.

Edit* I think it was my new response pads. They are broke in now and it is working great.

Paul Kerbals are the best. That man is a beast! I’m just gonna keep on trying til I get this figured out.