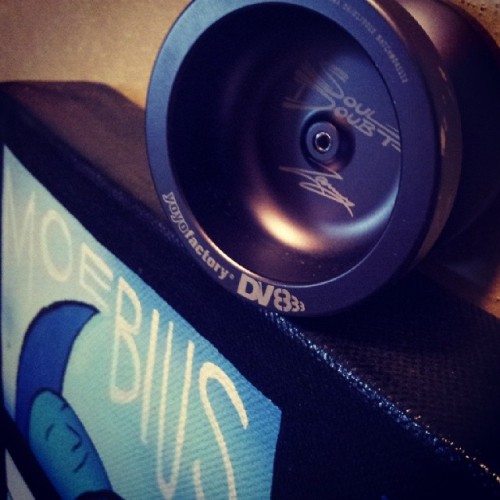 I had posted this on instagram and wanted to do this on yoyoexpert but I got too lazy to go on my computer to type this out.

Anyone remember last year’s April 1, 2013? I certainly do. It was honestly quite a blast as I have never been the type to do April fools jokes. But since this was a yoyo related thing, I just had to do it. A few people in the community know the name of “Zammy” so I knew it was going to make people question and think.

About three or four weeks before April 1st, Seth Peterson (Save Deth) was working for Yoyofactory and he had emailed me on a possible project between me/ Yoyofactory. Considering previous negative history with people in the company, I was very cautious. My first reaction was that it was just an an april fools joke at me. The trust level was near not possible for me to even consider it until Seth…

mentioned the charity part of it.

That hooked me right in. If anyone out there knows me well enough they know I do a few things charity x yoyo related. 2012, I was not able to do a yoyodrive due to money issues. Seth made the comment that this was their way of helping me do something similar to replace what happened during the holidays. So I went along with it.

Over the time we discussed the possible name, color, logo and so forth. We bounced back ideas until they came up with “Soul Doubt”. Considering this was April fools related and what had happened due to leaving Onedrop, I really liked it. It was on purpose mischievous and teased as to what people were thinking. Yoyofactory is known to have double meanings with their names of their yoyos, so it was perfect. Soul doubt…say it out loud: Sold Out.

When they had said the name, I didn’t know if they were secretly taking a shot at me or Onedrop. To this day I am still unsure if it was. But because it was charity related, I went along with it. If there was no charity based concepts involved more than likely I would of immediatly said no.

However, I was told that there would be one other company involved: Yoyoexpert. Andre’s store would be selling them as well as being involved in the April fools trolling. At the time they didn’t tell me how they would be involved besides that they were selling them. I spoke with Andre a bit via email and he convinced me this was all legit.

So I finally came back to facebook after my month and a half deactivation. Didn’t want to deal with anything yoyo related, was pretty unhappy actually. I simply posted “YYFxZammy” as an update knowing that people would start to question and wonder. Suffice to say, I recieved quite a bit of negativity via that update and personal messages. I was really expecting it but not ti the point people were cussing me out.

They definitely had egg on their face when this was all over.

The next day, YYF Ben took over. He started the hype train via Twitter, Instagram and facebook He was really having a lot of fun with it to the point he was laying it thick. People were immediatly sayinng how it was a April fools joke, due to the notion of how I would never associate with YYF and that it was April 1st. One of the first things he did was do a photo announcement on instagram saying about a new yoyo called the “Soul Doubt” which was Zammy’s signature yoyo. Also that it was part of the Champion line. Throughout the afternoon Ben would post on twitter little funny things as a means of marketing such as:

Yoyoexpert had posted on their facebook page about it as well, making a specific countdown page ala like what they do for other new popular throws. People kept questioning if it was real, fake, if I was sponsored by YYF and all that jazz. The plan was working absolutely perfectly. I had watched all day what people were saying and I couldn’t help but smile evily.

6 pm eastern time hit and the floodgates opened. Yoyoexpert changed the page of their promo art they did and revealed what it was as well as explained what it was. The Soul Doubt was a Yoyofactory special edition DV888 that had special “Zammy” engravings as well as the Soul Doubt logo. Had my signature and everything. 10 of them were publically available, each engraved a number too. 50 dollars each

The most important part of it was the charity aspect. All proceeds would go to a charity of my personal choosing. I choose the Children’s Miracle Network because of my hometowns Hospital is heavily associated with the organization. $500 was sent to me via check and I took it in to be donated the next day. Some people didn’t believe I’d take it in, due to other charity related things in the past that went wrong. The people there were actually pretty shocked, especially how I had to explain the story.

So thats the story of April 1st 2013 of the Yoyofactory Soul Doubt. A collaborated “anti-joke/reverse April fools” between Zammy, YYF and YYE. I’ve never seen anything like that happen in the community, so it was something special to be a part of. It was far too much fun due to all the mass confusion until the ultimate positive charged reveal. Although its April 2nd 2014, I’m throwing the Soul Doubt right now as #todaysthrow !

Thanks for reading this. Its the first anniversary and probably the last time I ever say this story but I wanted to share this because some out there did not see/know this.

Ah, yes, I remember this. That was great, Zammy.

I love yoyo history. Thanks for sharing this Zammy.

I think this goes to show how much you have on the yoyo community. You throw out the name Zammy and everyone becomes interested.

Thanks for doing so much to, not only the yoyo community, but to all different charities as well, Zammy. Great job.

Yeah that was hilarious. I’m pretty sure that there was an entire thread of just people questioning it’s legitimacy.

Yeah that was hilarious. I’m pretty sure that there was an entire thread of just people questioning it’s legitimacy.

I believe this is what you were thinking about
http://yoyoexpert.com/forums/index.php/topic,58514.0.html

Wow, I can’t believe it’s been a year already :o

That was just some seriously next level April Fool’s trolling. Great bit of collaboration between you, YYF and YYE. The real winner here was the Children’s Miracle Network. I’ve got a soft spot for kids as well and it always makes me smile to know someone’s doing something to help them out. Kudos!

LOL this bit of DV888 history is great. Soul Doubt = sold out?

Either that or someone is a NOFX fan

LOL this bit of DV888 history is great. Soul Doubt = sold out?

Such great times! One of the best DV888s made and in the end it all came down to a good cause too. Honestly though, has anyone ever seen such meta April Fools? Cause I haven’t before, and it still blows my mind how much it twisted people’s brains. :]

Either that or someone is a NOFX fan

Well, I do like punk rock, but rest assured it wasn’t from NOFX. Honestly, more than likely it was a dig at me from the YYF guys, but I didn’t really care because I was doing it for the children’s miracle network.