Only two yoyos I have (that I can think of) shipped with optional rubber weight o-rings. It’s an interesting idea.

The two I know are the Tom Kuhn SB-2 and the ThrowCafe Cappucino (pictured, this one is mine) 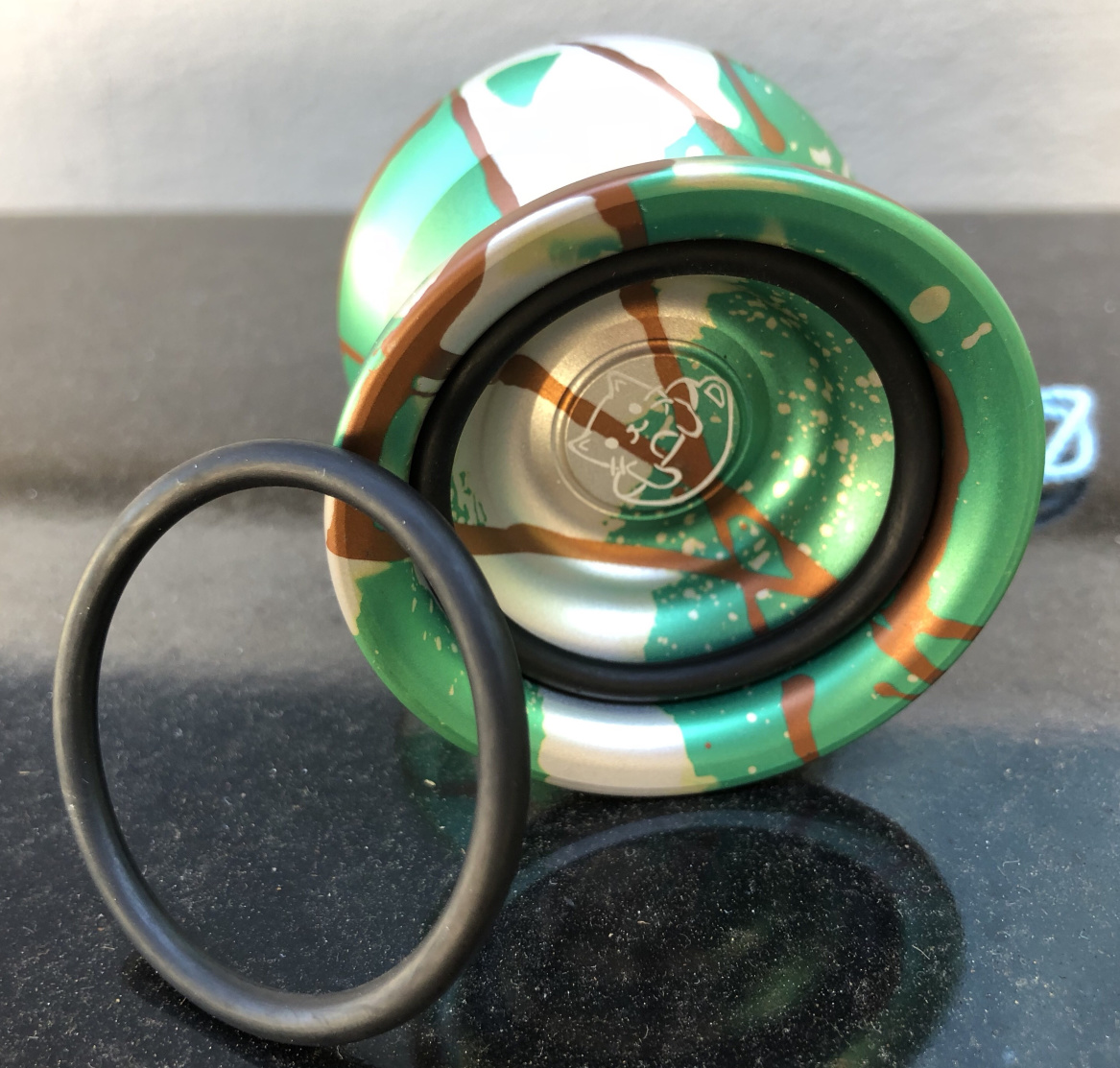 Of course the yo-yo has to have just the right dimple or curve in the cup to hold the o-ring in place via pressure fit. ThrowCafe even sells rings of varying weight:

The Tom Kuhn website lists their black weight rings as compatible with the SB2, SB4, Tom Cat, and Black Cat and weighing in at 4g. My SB2 came with a pair in the bag, along with the friction stickers, string, and manual.

3.0g doesn’t sound like much, but as a percentage of the overall weight, let’s assume it is a typical ~65g, that’s about 5%. And the PTFE rings are getting into 10%. It’s also rim weight so the effect of that 5-10% should be noticeable in theory?

When I’ve experimented with this, I don’t feel the weight rings too much on the Cappucino so I’m not sure what to think about them. But I definitely didn’t like the weight rings on the SB2 personally which is only 55g, but then again responsive yoyos tend to be lighter and I think rightfully so!

Anyway I was just curious, I suppose a well designed yoyo should be just the “right” weight as shipped, and shouldn’t require weight rings… but you could technically experiment with rubber O rings on almost any yoyo that has enough cup support to hold them in, if for some reason you wanted to give it a bit more rim weight. Not sure if it’ll add “vibe” or not, I didn’t detect a ton of vibe on the Cappucino or SB2 with the rings installed, but maybe that’s because they are held tightly in place and are just the right size.

Not sure if it’ll add “vibe” or not, I didn’t detect a ton of vibe on the Cappucino

I take this back, I played a bit more with the o-rings on and off the Cappucino to test, and it goes from

with the rubber o rings, even if I smush them in firmly around the entire edge. So you are indeed signing up for a tiny bit of vibe with the rubber o-rings. That’s the tradeoff.

I think your observation about the vibe, along with the obsession with “smoothness”, is probably what did in, for the most part, the idea of using rubber weight rings.

All the Dif-e-Yo stuff used to come with rings, and I think it’s fun to mess around with that.

I found some o-rings that fit my SpeedDial, and I like to pop those in when I play it unresponsive. It’s still not going to blow your mind with performance, but it really does help.

The magicyoyo n11 also comes with weight rings, but it’s not very good with or without them.

I forgot I had a Gladiator until @Grendel inspired me to remember today … I decided to pull the rubber weight rings out (and the metal side caps / pogs) and found it it has not one but … two rubber weight o-rings per side! Who knew?? 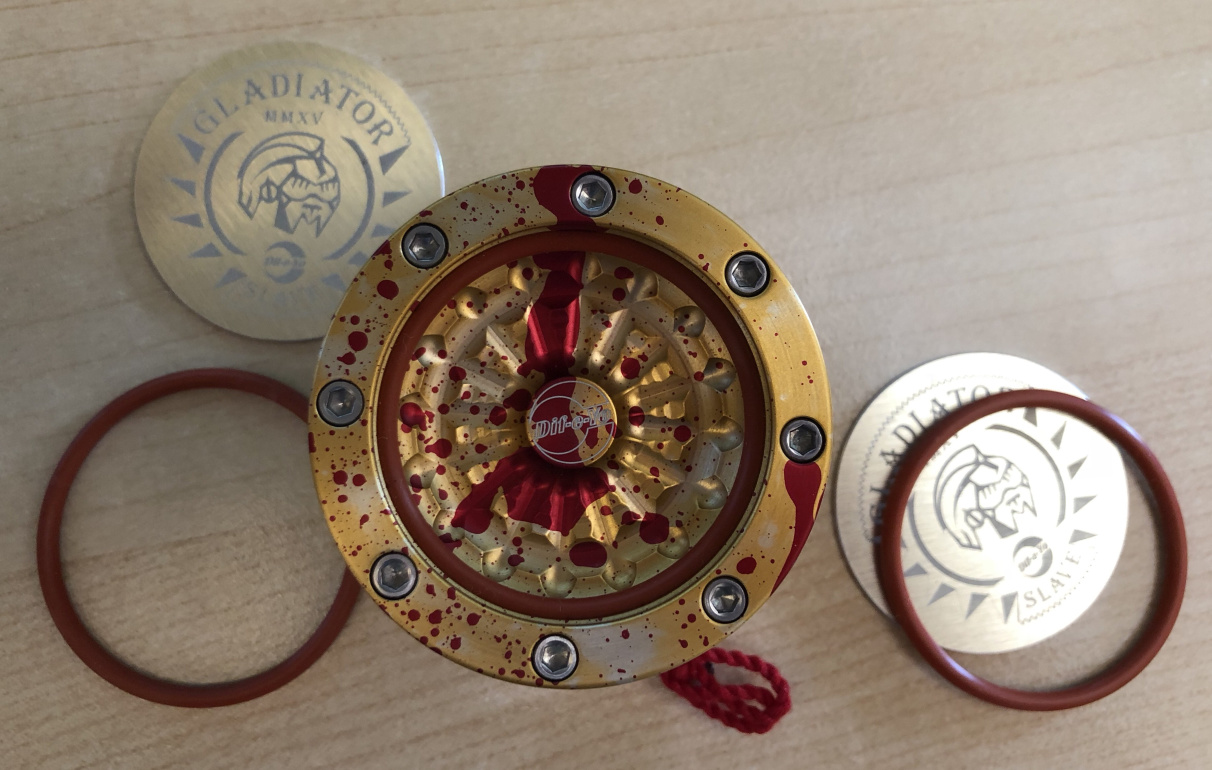 Yes, one to hold the metal cap in, and another rubber weight ring inside, there’s actually two grooves in the inside rim!

Who knew? So modifiable! I will say that 70g is a tad on the heavy side!

Most Dif-E-Yo yoyos came with them. In my opinion they did not cause any vibe They were designed with the o-ring in mind. Other yoyos that came stock with them were the Duncan FH2 and a couple of Spintastics yoyos, such as the Eclipse. The Eclipse also included a 1/8 in. spring steel ring that could be added for additional weight.

Whoooaaa they have METAL weight rings? 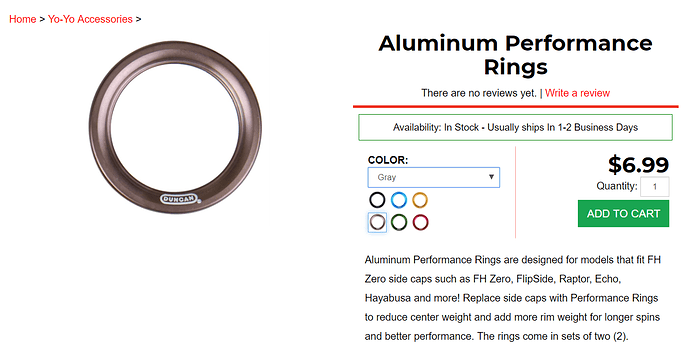 Came here to say this.

The Eclipse also included a 1/8 in. spring steel ring that could be added for additional weight.

The Kuhn RD1 did as well.

I have an RD1 and I didn’t even realize that ring was removable!

The Eclipse also included a 1/8 in. spring steel ring that could be added for additional weight.

The Kuhn RD1 did as well.

The rings in the spintastics were a ring of 1/8 in. diameter spring steel wire, not like those in the the RD1 which appear to be a coiled flat steel spring.

Whoooaaa they have METAL weight rings?

It works! This is in the Alu rings in a Raptor. 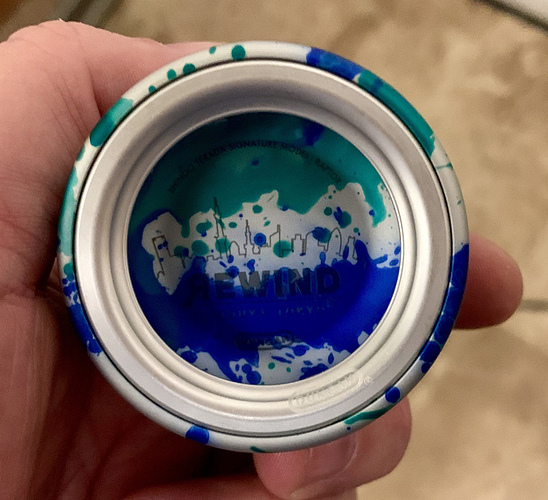 Whoa! OG Raptor or the revamp?

Btw the ThrowCafe Boba also uses those rubber weight rings. I think other ThrowCafe throws might, as well, but not 100% sure.

2018 Raptor from the looks of the photo: that was a [INSERT JAPANESE STORE NAME HERE] exclusive design, which was actually designed by Shingo Terada aka Terry

Yeah. Duncan has those rings and fit any yoyo that support 48mm caps. Those are kinda heavy tho, they add a whole 10 grams to any yoyo.

Spingear has their own rings that vary shape and material (Al and POM), so you can get lighter rings and have better options to add weight. Someday i’ll get a pair of FHPs and have each one with a different set of rings. It just seems so interesting!

How does that raptor play with those rings on?

I think @Glenacius_K should do another yoyo like this, but make it about 59 grams stock and 63 grams with rings. Then you would have the ultimate responsive and unresponsive yoyo with a bearing change and ring install. 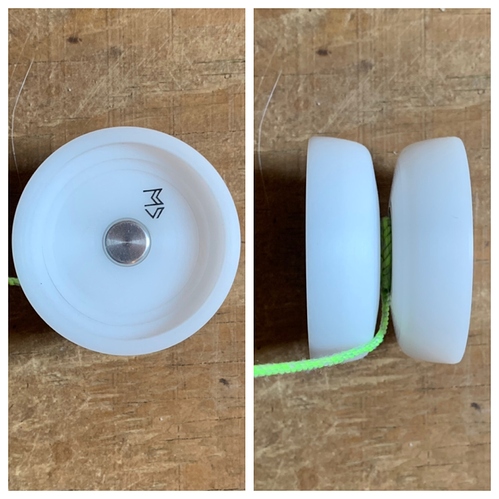 My OG Di Base came with rubber o-rings as well!

The yoyo isn’t so perfect after all then?..

Don’t put down my yoyo like that! These are just ideas is all.

Full Disclosure: I own a sawmill and bought 22 acres of hardwoods recently. I aim to get a lathe in the not too distant future and implement the numerous yoyo ideas I’ve got!
I’m gonna torture myself and make only really wide unresponsive wood YoYos and throw away anything that isn’t dead smooth!

how many yoyos is that equal to? use your bess guestimate.

Since I’m only making wooden unresponsives and heating my house with anything that isn’t dead smooth…just a few.