The Fixed Axle Megathread of Awesomeness

This should be here.

Really? I had to adjust my butterfly to be a bit less responsive. The variation between butterflies must be huge. Or you like really responsive yoyos.

I do prefer my yoyos on the more responsive side, but this was crazy. I could only get it to return sometimes with positive string tension and right after I throw. I was popping the yoyo all the way back up to my hand before responding and this is with fat kitty string. Now my gap is a little bit smaller than the stock version yooldman posted. Now its perfect.

i tend to find kitty string a little unresponsive for the first 5-10 minutes, gotta get some sweat in there before it wants to come back. it’s cool hearing how other people set up their butterflies!

got some good stuff for this week’s FF, some butterfly tech from me, plus guest spots from isaac, takeshi, and mr. world champ hank freeman. chyeah! who would you like to see as a fixie feature?

Also, what’s a good way to dismount from an upside down trapeze stall?

Back when I started yoyoing, I couldn’t afford expensive yoyos.

I pretty much would use butterflies.

Also, what’s a good way to dismount from an upside down trapeze stall?

ben conde won — actually, surprise turn of events! this week you’re gonna see the footage of the fixed axle championship of all the world, including ben’s amazingness, so consider that hank teaser a preview of next week, hahaha.

as for upside down trap stalls, i find it helpful to cross your arms a little bit to stop it from twisting up. because of this, you might as well go all in and cross all the way over while pushing the yo-yo out. boom! other options include the kwijibo pop to trapeze bro, a reverse dumptruck, reverse makin’ da zines… sky’s the limit, really. experiment and find something you like!

Not only is it my best fixed axle accomplishment, but yoyoing in general. For the first time in 3 years of yoyoing, my kids said “wow!” while I was yoyoing. I was messing around with stalls, and just having fun and being goofy because they were watching. Since that time a couple weeks ago, they have both been yoyoing daily together, by themselves and with me. Its so cool to hear one of them yell “Yes!” as they hit a trick in another room. The pace of fixed play is so wonderful. I can challenge myself while having fun, and yet the tricks are still comprehensible to those who don’t really know what is going on. I asked my wife one time what she thought of my tricks before I started playing fixed axle and she said that she wasn’t really sure what was going on, it was all so fast and looked kinda the same. In summary, bearings do not bring families together while fixed axles do. ;D

How hard is fixed axle to get into? i would gues its hard to do when your technique isnt that great yet? i just do 1A right now and messed around in 4A a bit, but i think fixed axle looks great! I´m an “intermediat player” what ever that means

i gues what i m asking is, is there any point in getting a fixed axle yoyo if i´m not that good yet?

Fixed axle is really good to get into because

your technique isnt that great yet

. I find that it greatly helps with throwing, control, and regens in unresponsive yoyo. It can be a bit intimidating trying to start due to the weird language Drew and Ed have created, but starting at the oldest Fixed Friday and working your way through is fairly easy. Just make sure to practice your UFOs and sidewinders.

Still haven’t hit my Shoot the Moon yet. Still tryin’. I wonder if I’m the slowest learner ever for StM.

How exactly does the Fixed Axle Throwdown work?

benetan, fixed axle adds an extra level of challenge by upping the response and drastically cutting down the spin time - it’s definitely not for everybody, but the added sense of accomplishment and old school flavor makes it reeeally awesome for me. if you don’t wanna pull the trigger on a fancy TMBR or o.u.t., you can get a sense of what it’s like by setting up a bearing yo-yo to be extra responsive, or just plunk down five bucks for a profly. i definitely think that working within the boundaries of fixed axle play offers a good perspective for players of all skill levels, bump up your response and give it a shot!

gregP, what part is giving you trouble? i know plenty of players (including quite a few pros) who struggle with shoot the moon, so no need to feel ashamed. the tricky part for me was just getting the hang of the vertical punch, but it varies from person to person. i’m no joseph harris, but if you want to describe your hangups or post a video we could have a little stm clinic.

also, greg: one of the most common mistakes that i see with stm is trying to force it too much, especially on the vertical punch part. it’s a surprisingly gentle motion, you’re guiding the yo-yo more than pushing it (if that makes sense.) it helped me to think of it as a big “V” shape happening above my head, with the punch going back. going back! some people try to punch it forward and that takes you to sketchytown real quick.

@zorro, ed posted a pretty good summary of the history of the FACoatW here: http://yoyonews.com/2013/08/23/fixed-friday-fixed-axle-championship-of-all-the-world/
http://vimeo.com/72865106

but, long story short:
ROUND 1(12+ players, ideally an odd number)
required element/“theme” for a trick is drawn from a hat. each player gets three attempts at a trick that they think fits that criteria. after all the players have gone, the “shoe judging” begins: each player gets two votes, top eight advance. ties are settled with a second element drawn from the hat, eliminated players remain onstage as judges.
ROUND 2 (8 players)
again with the element/hat thing. shoe judged once again, top four advance
ROUND 3 (4 players)
“the ben conde go big™ extreme trick challenge”. no theme, just craziness! top two advance.
ULTIMATE ROUND!! (2 players)
three-minute “battle” freestyle! players take turns doing tricks to a song in a head-to-head showdown. still shoe judged, but only one shoe obvs.

It’s definitely the vertical punch. It might also be that I’ve gotten too ambitious and skipped steps… I mean, I don’t even know punching bags or any proper looping. Maybe trying for StM was biting off more than I can chew (mind you, I did that for 1A also, going for Spirit Bomb after only 2 or 3 other easier tricks like Matrix and Kwyjibo).

For the vertical punch, I indeed aim to go a little back, and I’m actually trying to go gently. The few times I’ve “almost” gotten it, I could feel how it’s supposed to work. Which is a good step. But when I try to reproduce, I’m not adding any more consistency.

Typically, as soon as the upswing starts, the yoyo goes out of alignment… flattens out horizontal most of the time, or at least gets all janky.

I am new to fixed axle, but i got a butterfly at a store earlier today, played with it for a few hours, broke it, and tomorow im going to get 1 or 2 more. When i get more advanced i want to get a wooden one.

I am new to fixed axle, but i got a butterfly at a store earlier today, played with it for a few hours, broke it, and tomorow im going to get 1 or 2 more. When i get more advanced i want to get a wooden one. 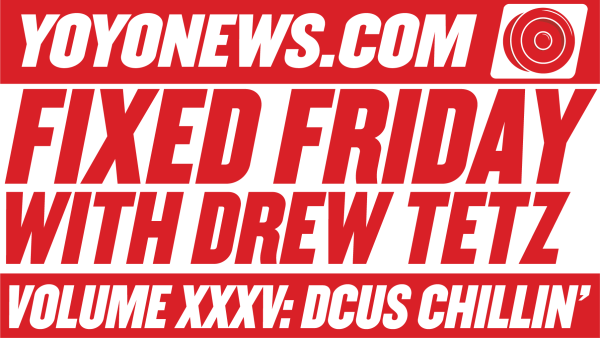 The axle in a butterfly is around 1/4 inch, right? Isn’t that about the same as the inner race of a C bearing? Or won’t it fit? Also, it would probably be a bad idea to do that, but whatever.

Caught a few tricks on video, but the main one I wanted to share being a 1.5 mount rejection whip on my OUT Pocket Love. The rest is filler that I stole from Ed and Drew (again).

Youtubes doesn’t like my music, so I put it up on vimeo in case it gets removed. This has the original music I put to it. Youtube link has the quick replacement music that doesn’t fit as I wanted.