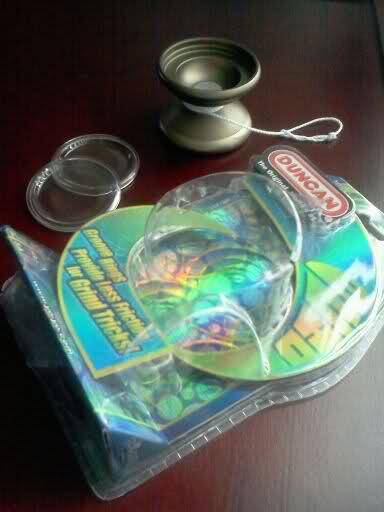 After having the Echo for a good month, I figured that it was time for a review.

The Echo came inside a plastic packaging cover with two plastic removable side caps for added weight. I haven’t tried to add the side caps on yet since I’m liking the play without them. Cool packaging. 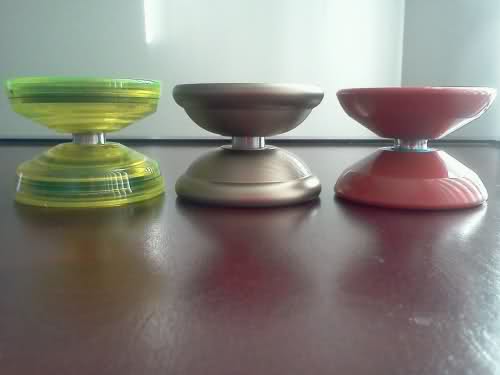 From left to right:

Protostar being the tallest, then the Echo, then the T5. 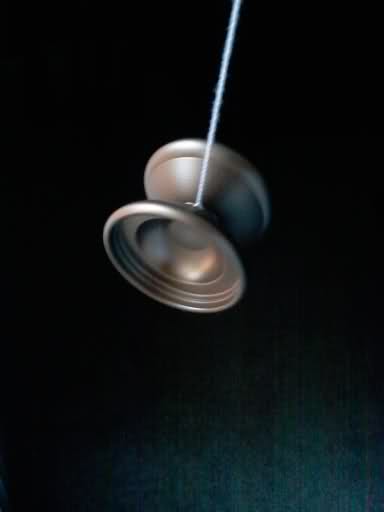 At Worlds I had the chance to try this yoyo because my friend Connor Sewell brought two for a 3a set. He noticed me using it a lot and suggested that I should go to the booth and buy one. When he told me they were $45 I was surprised. Great price compared to other metals out there. Ended up not buying one at the time. Shortly after Worlds more colors came out so that was a plus when I brought one.

First throw was smooth. Just like at Worlds I was amazed. While throwing you can feel a thump feel on string which I later found out that its the bearing being force into the bearing seat which is normal. You will feel it sometimes then smooth again.

The Echo during play feels like it just wants to go with the flow. You can play fast with it but it may not seem as fast as other throws to you. Ending this on a good note, the Echo is comfortable in hand, great for grinding, and horizontal play.

I Definitely would suggest this yoyo to people who like full size yoyos and heavy yoyos. The Echo would also make a awesome first throw or even a gift to someone. $46.99 peeps so don’t miss out!

Nice review, have to agree about the short axle and fearing of strippage however. I just make sure that I’m screwing the half on straight. The ‘binding’ you’re feeling is the bearing being forced into the bearing seat. The Raptor also suffers the same issue but after a few times of doing this, the resistance will probably be less since the bearing sliding in and out of the seat will eventualy wear the anno coat.

Other than that I love everything about the Echo…amazing spin times (depending on bearing and throw strength) as I got 4 minutes from when it left my hand to the point it completely stopped spinning. I could probably bind it safely at 3 minutes.

Since mine’s the Triple Crown edition and came in a plain white box, I couldn’t say how it played with plastic caps in it but I would most likely play it without them anyway.

I have also heard about stripping being an issue sometimes with the Echo. Besides that it sounds great though and I really hope I can pick one up sometime. I have a Raptor (from the same line of Duncan yo-yos) and it is one of my favorite throws. So smooth and a great price!

Thanks for the tips AngryGumball!

Yeah you should definitely pick up one singdreamyo.