Who "invented" the production un-responsive yoyo?

Who gets credit for making the first professional/production wide gap un-responsive yoyo? My vote goes to Frank Difeo for the Dif-e-Yo Wide-Load, circa 2002 - 2003 timeframe. Anyone have better/different data? 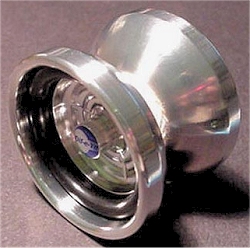 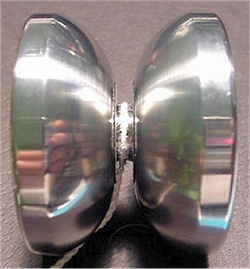 Do you mean intently or by accident? If by accident, Team Losi yoyos would lose their starburst response within weeks of using it, meaning the player would have to bind to get the yoyo back up. Intently, YYJ had produced many yoyos that were close to unresponsive when the lube in the bearing was broken in.

I think early YoYoJam predates Difeyo. Maybe the Mega SpinFaktor or Mini Motrixx. Another interesting question is where the bind comes from. Steve Brown has said in other threads that he was taught how to bind in 2000 at BAC, but legend has it, [low, husky voice] that Gary Longoria, Paul Escolar, and some other pioneers were using binds to return starburst yoyos somewhere around 1998 or 1999. I personally learned to bind in 2003 or 2004 with the Matrixx. God, I loved/hated that yoyo.

The first person I had ever seen bind was Clay Murray in '99.
Had not seen anyone do it anytime prior.

I figured out binding on my own in 2005 obviously I didnt invent it but if a fifth grade kid could learn it on hia own just by experimenting with stuff then I’m sure it is not a new concept.

This has interested me for a while also too. While yoyojams came with wide bearings the thick lube in them showed response was intended. MSF was designed for extinction, not return. I couldn’t get wide loads to return even with a bind :-p

Interesting to think unresponsive yoyos could have been patented.

First bind I saw was offstring, Jon Gates or Higby, who learnt it from Jon. Unresponsive on string I first saw Matt Harlow do in 99 and know Dale Oliver taught him. I wouldn’t be surprised if Dale had knowledge of it pre dating what anyone here could contribute.

Is it that easy to get dry bearings from a manufacturer, or do they usually come greased?
Unresponsive play sure was already getting popular when the small bearing YYJs like the Super Spinfaktor were state of the art. I think when they released wide bearing models like the Patriot in 2001 they were intended for both, responsive and unresponsive play, as they had an adjustable string gap.

Many YYJ wide bearing models with starburst were hard to return, too. One year later the O-ring response system made things much, much easier.

Last time this topic came up I recall narrowing it down to either the original YYF Grind Machine or the Oxy 3.

I looked up YYJs website from way back then on archive.org. They didn’t advertise the Patriot as being good for unresposive play in 2001. Quite contrary: They mentioned the patriot was responsive enough so that a beginner could still get it back to hand while still having a very wide gap to allow for complicated tricks with many layers of strings.

Including a clean bearing with the yo-yo wasn’t much of a breakthrough. It was merely an indication that unresponsive play had established itself and that the majority of advanced players preferred to play their 1A yo-yos unresponsive. It’s a nice touch though and I really appreciate not having to clean all new bearings.

I can totally see how YYJ would have stuck with lubed bearings for a while to make their product more attractive for beginners even though advanced players preferred their yo-yo unresponsive. Cleaning a bearing is no big deal. Including narrow and wide bearings is just a more elegant solution for the same problem.

If you read the reason why Dif-e-yo made dif pads and KK bearings, they were designed specifically for that reason. Id have a guess and say frank was the one who really standardized it and made it a “thing”.

Side note- I love the Wideload. I have that in my car all the time. Really a classic piece, and the millions of surface scratches gives it such a nice patina.

It does.
According to the information on the Dif-e-yo website were meant to play like worn in (Duncan) friction stickers. Those were too responsive for unresponsive play when new, took ages to wear in so that they felt just right and then wore out quickly.