Frank and Dom over at ILOVEYOYO are constantly tinkering with their already established designs. Most of their line up gone through several revisions and refreshes thanks to this constant tinkering and striving for perfection. These tweaks can range from a subtle tweak here or there to a major design change. Today I am looking at the newest revision of ILYY’s next flagship yoyo, the Enigma. If you are wondering which camp this one falls into, subtle tweak or major design change, I can whole-heartedly say that this one is sliding into the latter category. Now the question begs to be asked, did the design need to be taken in such a new direction? The production run Enigma was a solid player. Is this a step in making the ultimate version of the yo-yo or is it a case of fixing what isn’t broken?

The first thing I noticed about the new Enigma is that the catch zone has been slightly redesigned. It is still the same H-Shape that has been sported on all Enigmas back to the black prototype but on the 2011 model the curved step is slightly more pronounced, giving it a better feel when the yo-yo is spinning on the finger during a grind. Now the biggest change to the yo-yo is obviously in the gap. The Enigma 2011 is now sporting a small bearing design. This gives it a smaller gap and a thinner response. We will discuss how this affects the play later on in the review. The rest of the Enigma 2011 design mirrors its blue and black siblings. The cup is still sufficiently deep with the slight spike in the center. The IGR is decent but after playing so many other ILYY products I am beginning to find that the Enigma IGR can be a little slippy. The finish is a green and gold Candy Blast finish that is smooth to the touch. A nice little bonus to the finish is that ILYY has taken the extra step of masking off the guts in order to stave off the string wear and premature snapping that is common when the string rubs against the blasted walls of an unmasked gap. To sum it up, there have been some tweaks to the shape and feel of the yo-yo that enhance the play but if you liked the original Enigma, there is enough of it in there to make you a happy player if you pick up the new one.

This is one of those times where I have to disagree with the specs on paper. While the ILYY website states that the 2011 Enigma weighs as much as the original, it feels lighter on the string. If I didn’t know any better I would say it clocked in about three to four grams lighter than the 67 gram spec says. The 2011 Enigma is faster on the string and snappier when given a direction change.

The response is still the Red Hot sILYYcone that ILYY puts in all their products but there is a lot less of it thanks to the switch out to a smaller bearing. The upside to this is that the break in time was drastically reduced and it still gives nice tight binds.

Here is the single biggest change to the Enigma; the 2011 model is sporting a smaller D-Sized bearing instead of the large metric bearing that comes stock in most of their line up. The stock bearing came quiet out of the box and spins for quite some time. I don’t know who their supplier is but this is a top-notch bearing. 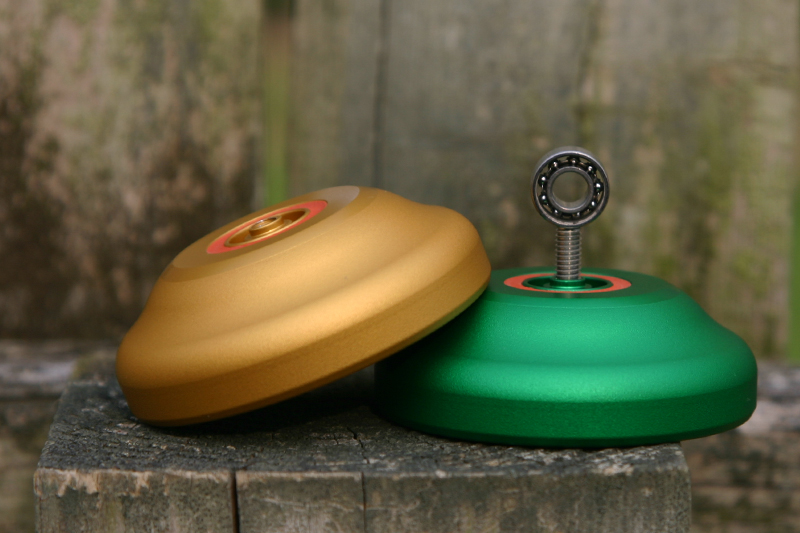 The first thing I noticed on the initial throw is just how much faster this yo-yo feels compared to the original incarnation. It may look similar but it plays like a totally new yo-yo. It is quick on the string while retaining the light amount of float that the first run had. Pretty much every trick that I could do with the original could be done with the 2011 Enigma. I did notice that loops did not open as wide as on the original but I have chalked that up to the smaller gap that comes with the D-Bearing. Don’t get me wrong, suicides were still very easy to catch, the loops were just not as large. The stability on the string was also ramped up a bit as well. I didn’t notice any tilt on the string even when I repeatedly, and sloppily, caught it on the string while performing behind the head Eli Hops. (Side note: it does tilt when it comes in direct contact with the back of your head.) Grinds are exactly what you would expect from a Candy Blast finish. It is smooth when coming in contact with skin. As I said the redesigned catch zone straddles the finger better giving it more spin during a finger grind. Thumb grinds were a little bit of a mixed bag, it did slip off the thumb every so often but throwing at a slight angle corrected the issue.

To answer the question, yes this redesign was needed. This is the best version of the Enigma yet. I love the speedier feel that the small bearing gives. If you have been on the fence about picking up an Enigma then it might be time to hop off and pick the 2011 up. If you do have one pick up the new one anyways, they feel quite a bit different. Congrats ILYY, you have successfully taken another of your yo-yo designs and made it even better. I can’t wait to see what you do with the new designs in your bag of tricks.